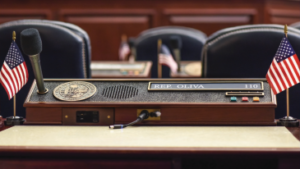 Rising insurance litigation and bad faith were among other topics discussed at legislative committee meetings last week.  Also explored were the environment, criminal justice funding, children’s issues, healthcare, more toll roads, and boosting teacher pay among a variety of other issues.  In the Senate Infrastructure and Security Committee, changing weather patterns and the effects of “climate change”, a term not used in the Scott administration, made headlines in the political news clips.

Julie Nesheiwat, Governor DeSantis’ chief resilience officer testified that climate “issues” are now, not sometime in the future.  The future is now.  Those of us that follow insurance trends see this with every storm and severe weather patterns that wreak havoc on policyholders’ homes and businesses.

Litigation: At the Senate Banking and Insurance Committee, former Senator and president of Security First Insurance, Locke Burt, urged litigation reform.  He cited “the unlimited amount of money an attorney can get for suing a property insurance company in Florida.”   The company insures 1 in 4 properties in the Panhandle and has paid $35 million on its 700 open claim, each receiving $50,000 while repairs are ongoing.  About 5% of claims at any time are in litigation.

Burt said the plaintiffs’ bar considers Hurricane Michael “a gold rush” and is going to make $300 million to $400 million suing insurance companies, which is about $40,000 in fees per case.  The policyholder gets just 63% of the remaining settlement or verdict award, he said.   Florida’s domestic companies have lost $600 million dollars in recent years from rising litigation costs and predicts rates will rise an average of 25%-30% next year as result.

Plaintiff attorneys said that carriers’ litigation expense are self-inflicted wounds.  They pointed to alleged violations of value policy law and conflicts between flood and property insurers, where one will say the responsibility for the claim is on the other.  Committee Chairman Broxson noted there is clear law from the 2004-2005 events to guide carriers in determining what portion is covered by whom.

At least one plaintiff attorney noted the threat created by the unregulated surplus lines, which are gaining a stronger foothold in the Florida market, prompting Senator Jeff Brandes (R-Pinellas) to warn of a future “wild west” marketplace.

Bad Faith: The House Civil Justice Subcommittee last week devoted a generous 2.5 hours to this important subject.  Christine Davis of Carlton Fields gave a “just the facts” of Florida’s bad faith laws.  She was followed by Fred Cunningham of the law firm of Domnick Cunningham & Whalen and John Weihmuller of Butler law.  Both gave their respective opinions with Fred saying no change in bad faith laws are needed and John saying the opposite.

Cunningham said that insurance companies get “it” right 99% of the time and that bad faith cases are few.  Weihmuller said that courts don’t like insurance companies, nursing homes and lawyers!  And that while an insurer’s negligence doesn’t itself constitute bad faith, it has become a relevant factor and requires legislative reform.

“When we have some of the highest insurance rates with property and casualty or auto insurance rates, which affects all 21 million Floridians, we have to take a look at that.  Is it because we live in an area with a lot of hurricanes?  Is it because we have so many uninsured drivers?  Maybe, or is it that some people are gaming the system?  It seems that in these bad faith claims, it’s very easy for somebody to game the system to gain a financial advantage.  If you’re the plaintiff’s side, there’s going to be a win. Maybe the scales are just a little bit out of whack, but we will look at that and we’ll take your input as we go forward and decide the next step.”

Meanwhile, Bay County is ramping up code enforcement in the county that was ground zero for Hurricane Michael.  County officials are notifying property owners of building code enforcement as rebuilding occurs.  If you haven’t listened yet, check out our two recent Florida Insurance Roundup podcasts: Is Florida’s Building Code Protecting All of Us? and Why the Panhandle Wasn’t Hurricane Strong for Michael.