The seventh time proved to be the charm for commonsense reforms against unscrupulous vendors and their shady attorneys as the Florida Senate last week passed its Assignment of Benefits (AOB) reform bill.  The bill is identical to one passed in the Florida House earlier this month and Governor DeSantis, who has decried AOB as a “racket” says he will sign it into law.

HB 7065 / SB 122 by Senator Doug Broxson (R-Pensacola) passed by a vote of 25-14.  It had been amended two weeks ago to match the House bill by Rep. Bob Rommel (R-Naples) which passed that chamber on April 11.  It addresses the explosion of property insurance AOB lawsuits over the past decade – up 900% from 2008-2018 and up 8,000% when you include automobile glass AOB suits.  More than half of insurance litigation in Florida today involves an AOB.

The bill revises the current one-way attorney fee system which incentivizes lawsuits and institutes a formula, based on the difference between the vendor’s presuit settlement demand and the insurer’s pre-suit settlement offer.  The Vendor would receive attorney fees only for judgements at least 50% larger than the disputed amount.  (If the judgement is less than 25% of the disputed amount, the vendor would have to pay the insurer’s attorney fees.)

The bill also requires vendors give a 10-day notice prior to filing suit, and in essence “stand in the shoes” of the policyholder for depositions and other “duties after the loss” responsibilities, provide the AOB document within 3 days, and an itemized, per-unit cost estimate of services.  Emergency services would be limited to $3,000 or 1% of the policy limit.  Vendors CANNOT use the AOB in any way to extort “administrative fees,” “mortgage processing fees,” or “penalty fees.”  Consumers have 14 days to rescind an AOB and 30 days if work hasn’t commenced.  Insurance companies will be allowed to offer policies limiting or prohibiting AOBs in the future and in most instances these policies will be less expensive than policies that allow them.  (See Bill Watch for complete details.)

The bill requires state-run Citizens Property Insurance rates for 2019 to reflect projected savings.  Citizens President & CEO Barry Gilway called passage “a critical step in our efforts to bring relief to our policyholders, who have had to pay the bill for runaway litigation and AOB abuse.”  Citizens’ actuaries have estimated the reforms would reduce the statewide average rate need from 25.2% to 10.1% for homeowners policyholders.  In South Florida, the epicenter of AOB abuse, the average rate need would drop from 30.4% to 12.8%.  These figures will change slightly as policy information and data are updated.

Citizens current 8.2% statewide rate hike request before the Florida Office of Insurance Regulation reflected the rising costs of AOB and other litigation and would impact 97% of its 421,000 policyholders.  That request is now being recalculated and will be re-submitted to regulators to reflect expected savings under AOB reform as required by the bill. 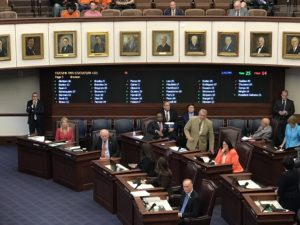 The Florida Senate voting on the AOB Reform Bill, April 24, 2019

Despite this legislation being tremendous public policy benefitting consumers, several Democrats opposed any AOB reform and there was one Republican who just said no as well: Senator Anitere Flores from Miami, the former chair of the Banking & Insurance Committee.  For some reason, Senator Flores never grasped the gravity of the consumer abuse and that rates for her constituents were going up because of this insanity.

“This legislation is a long time coming and serves as a wake-up call to the bad actors that these abusive tactics will no longer be tolerated. I am thrilled and relieved the Legislature recognized the need to end these scams and weed out those who are hurting our customers and tarnishing our industry’s reputation,’’ said Cam Fentriss, legislative counsel for the Florida Roofing and Sheet Metal Contractors Association (FRSA).  I salute Cam and the FRSA for joining, rather than fighting against this needed reform.

A provision that included automobile windshield AOBs was taken out of the bill several weeks ago, a move the Consumer Protection Coalition said was disappointing. “Thousands of Floridians have unknowingly become the subject of litigation over their windshield replacement claims without their knowledge or consent. This practice must stop.  We encourage lawmakers to address auto glass in future AOB reforms,” the Coalition released in a statement.

Despite well-organized opposition from some construction and restoration groups, as well as the trial bar of course, reform was passed.  A Sun Sentinel Editorial last week advocating against the reform without an accompanying industry guarantee of rate reduction, mentioned yours truly.  It noted my defense of the industry as doing right by policyholders and took a swipe at me for being a regulator-turned-lobbyist.  Folks, I always take things like that as a good sign, that I must be making a difference!

But grieve not for the trial lawyers and their ongoing quest for full employment.  There are alternatives to using AOBs that can sting just as much and are not affected by this reform bill.  The dynamic legal duo of Kim and David Salmon of Groelle & Salmon in St. Pete notes that “causes of action” are still assignable.  Under Florida law, parties can assign causes of action derived from a contract or a statute.  Causes of action, they say, can be brought under a breach of contract.  It doesn’t have to be for insurance benefits.  The cause of action is considered personal property and is an asset that can be sold or assigned to anyone.

Of course, they are right.  The bad actor trial lawyers are now convincing homeowners with claims via video, radio, and billboard: “Don’t file an AOB or sign-up with a public adjuster – just call us and we will file your claim.”  It’s not uncommon now for a lawyer to call in the First Notice of Loss claims line of an insurance company in place of the homeowner, who should be the one to call first.

One insurance industry executive has predicted there will be a race to file as many AOBs as possible between now and July 1, when the reform will become effective following the Governor’s signature.  For more on where we go here, I hope you’ll join me at a Lunch & Learn on AOB that I’m honored to be a part of with Robert Schulte of Scarborough Attorneys at Tampa’s Oxford Exchange next Monday May 6. (You can RSVP to Stacy Simmons at [email protected] to reserve your complimentary seat – CE credit information is pending)

Governor DeSantis, in his state of the state address on the eve of this legislative session, noted that AOB “has really degenerated into a racket” that he hoped the legislature would fix.  He has said he will sign this reform bill to become effective July 1 and I received a phone call last week from his office, asking why I support it.  I was happy to oblige and here’s what I shared with Governor DeSantis staff:

As a former Florida Deputy Insurance Commissioner and representing property insurance companies that write 2 million of Florida’s 6 million property insurance policies, I have seen first-hand what happens when bad actors use an AOB to unlawfully inflate claims amounts and delay claims repairs so damages worsen and make repair costs go up.  This bill protects all Floridians from abusive tactics that have gone on too long.  Thank you Governor DeSantis for your leadership!