At this pace “recovery could take a decade” 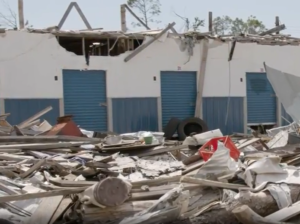 A storage business remains much as it was almost a year after Hurricane Michael destroyed it, September 30, 2019. Courtesy Level Up Digital Media

Thursday, October 10, marks the one-year anniversary of Hurricane Michael hitting Florida’s Panhandle.  The Category 5 hurricane made landfall in Mexico Beach with 160 mph winds and a 15.5 foot storm surge.  It went on to pummel Panama City, and inland towns such as Blountstown and Marianna.  But nearly a year later, recovery is lethargic.  The area feels forgotten.

Michael was the first Cat-5 storm to make landfall in the U.S. since Hurricane Andrew struck South Florida in 1992.  But the response to the two storms hasn’t been the same.

“We still have people who are living under blue tarps that are rotting; they’re that old,” said State Senator Bill Montford, at a news conference last week by the nonprofit community recovery effort Rebuild 850.  He and others warn that at this pace, recovery could take a decade.

The area lacks the population, resources, and influence of a Central or South Florida – and the insurance coverage needed to fully repair and rebuild.  There have been $6.9 billion in insured losses so far and an estimated $9 billion in uninsured losses.

Here’s a look at the current story of Hurricane Michael in numbers, according to Rebuild 850:

The Bay County Long-term Recovery Task Force recently reported more than 60% of the housing in Calhoun and Jackson counties remains damaged or destroyed by Michael.  Rental housing is scarce, too, and has driven the average monthly rental rate in Panama City from $1,200 to $1,500 a month.

Local governments are in bad shape, too.  Many are small towns with limited budgets; some officially designated “fiscally constrained” and overwhelmed by the recovery task.  The state spent more than $1.6 billion in its initial response, mostly for debris removal, and is awaiting federal reimbursement.  The legislature last spring allocated almost $221 million more to help local communities.

The first dollars of that are now being spent to pick up the tab for operational costs in some of the worst hit communities.  Mexico Beach just received $1.1 million – about a third of the city budget – to run its police and fire departments in the new fiscal year that began October 1.

Panama City’s previously leaking sewage and water systems were further damaged by Michael and now need $200 million in repairs.  Raw sewage has been flowing through city streets and ditches into local waterways over the last few weeks.

“If these solutions aren’t found in a relatively short period of time you could find yourself with a community that has a hard time ever looking like it did pre-Michael,” said Rebuild 850 Co-Chair and Former Florida House Speaker Will Weatherford last week. 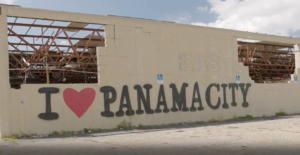 A sign of the times in Panama City, Florida, September 30, 2019. Courtesy Level Up Digital Media

Indeed, there’s growing concern that if needed home repairs aren’t made and affordable housing created in the next few years, the tax base will erode to the point of no return.  Former FEMA Director Craig Fugate, who previously served as Florida’s head of emergency management, has suggested it’s time to think outside the bureaucracy.  He said last week that HUD money could be diverted, as it was after Hurricane Katrina hit Louisiana, to repair damaged houses that didn’t have insurance. Fugate has been urging the state to do the same thing.

The need is great.  A hurricane homeownership fund to help residents get back in another house has been committed in just four months.  The Florida Housing Finance Corporation has designated $5 million in down payment and closing cost assistance to help more than 335 homebuyers.

Legislative efforts in the upcoming session are going to focus on identifying unmet needs and finding sources for funding them, say Panhandle legislators.  The federal government has spent $1.4 billion through July in relief and recovery efforts, with another $5.2 billion in the pipeline available for local governments, residents, and businesses to tap into.

Rebuild 850 has received nearly $600,000 in donations to add to the $6.5 million collected so far by Volunteer Florida.  If you’d like to donate, visit Rebuild850.org.  (You can take a look back at the pictures and stories of Hurricane Michael through our past newsletters.)