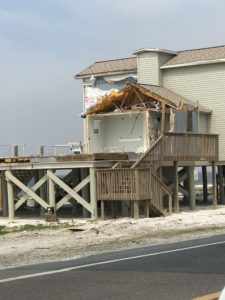 The 6-month anniversary of Hurricane Michael’s devastating strike on Florida’s Panhandle passed last week.  There was reflection on what’s been accomplished and the much, much more that needs to be done to even be on track for a full recovery one day.  The loss of homes, possessions, and jobs remains thick in the air.  Although it was the third most powerful storm to hit the U.S., Panhandle residents feel forgotten and as though Hurricane Michael never happened.

Like all big disasters, we can gain some perspective by looking at the current numbers on damage and recovery to date from the high-end Cat 4 hurricane: 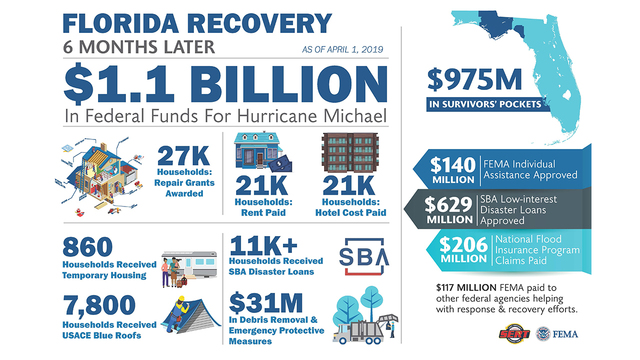 As the graphic shows, the Federal Emergency Management Agency (FEMA) reported last week it has provided more than $1.1 billion in aid to date to 31,257 emergency assistance applicants in Florida.

One of the biggest challenges today: housing and a lack of affordable permanent hosting for those whose homes or apartments are uninhabitable.  Time has run out on FEMA’s Transitional Sheltering Assistance Program, which provides short-stay hotel rooms.  FEMA last week provided extensions to only 17 of 278 families.  Local and state government is asking FEMA to include more families. 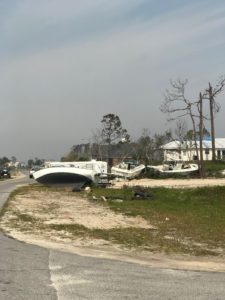 Beyond the human angst is Michael’s lasting visual presence – there’s still household and timber debris everywhere you go within the core 8-county swath of the storm, from the Gulf of Mexico to the Georgia line.  There’s simply not enough money or physical resources to clean it up.  It’s overwhelming.

Rain is now the friend and the enemy.  The scattered and splintered timber left behind by Michael’s 155 mph winds is creating a fire hazard as the spring weather turns windier.  A big 800+ acre blaze earlier this month was only fully extinguished with rainfall.  The same timber is also acting as a dam for rainwaters flowing south into the Gulf of Mexico, causing home and neighborhood flooding when it rains.  DEP work crews on barges in waterways such as the Econfina Creek in Washington County continue to remove debris but face many more months of work.  The state DOT meanwhile, has extended its roadside debris removal through May.

Forest officials say it could take a decade or more for the state’s timber industry to recover from the $1.3 billion in estimated damage.  Crop and livestock losses are another $200 million. 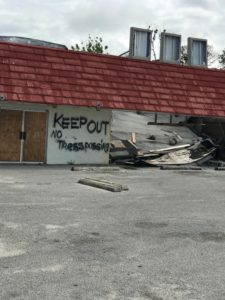 Damaged and abandoned buildings are a common sight in Port St. Joe and throughout the Panhandle, March 31, 2019

A $13.5 billion federal emergency-relief aid package remains in Congressional limbo while the Florida Legislature puts together a recovery plan from different Senate and House proposals (see this edition’s Bill Watch) that so far, are well short of what’s been requested.  The state has already spent about $1.6 billion on relief and recovery efforts that it expects the feds will reimburse.

Unfortunately, there have been some fraud schemes by unlicensed repair contractors who’ve come to the attention of authorities.  As if Assignment of Benefits (AOB) abuse isn’t bad enough, there are reports now of third parties purchasing AOBs from those unlicensed contractors, as relayed by Chip Merlin.

Active on-the-ground recovery efforts continue.  Bay County has taken ownership of the Community Recovery Center in Panama City. The first of its kind in the country, the former state/FEMA disaster recovery center location is now being locally run with a variety of local, state, voluntary and other agencies to assist with the long-term needs of disaster survivors.

Six long-term recovery groups have formed across the Panhandle, including Rebuild Bay County, comprising more than 70 nonprofit, faith-based, business and other organizations and agencies.  The group is focused on providing coordinated long-term recovery for Bay County residents lacking adequate resources.

Rebuild 850 is leading the effort to make sure the Panhandles needs aren’t forgotten.  They are still looking for donations and volunteer help.  The Panama City News Herald has put together a six-month anniversary story with a gallery of powerful pictures that you can view here.  Likewise, WMBB-TV & WFLA-TV have this comprehensive look back.