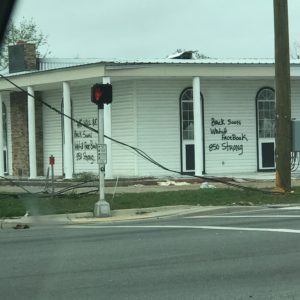 With the three-month anniversary this Thursday of Hurricane Michael’s landfall on Florida’s panhandle, insured losses are approaching $5 billion, rebuilding is well underway but housing remains a major problem.  The Cat 4 storm that killed 43 Floridians has spawned various recovery efforts to accompany FEMA’s, but one former state leader who lives near ground zero says it will be two to three years before the 12-county impacted region sees a full recovery.

“The scene is devastating and people are really hurting.  We’re not on anyone’s radar now,” former House Speaker and Panama City businessman Allan Bense said last week at a luncheon I attended in Tallahassee. “I’ve seen businesses close and people just pack up and leave town.”

Housing remains a big challenge.  There’s a wait on more trailers.  Municipalities and counties have had to pay upfront clean-up costs and are waiting on FEMA reimbursements.  These are mostly rural and revenue-strapped counties even in good times.   One of the two hospitals in Panama City just partially reopened last week, but will have to lay-off more than 600 people next month. 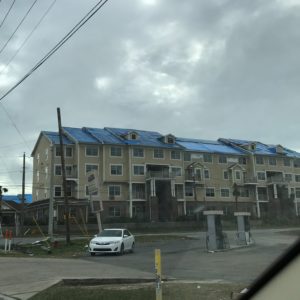 Blue tarps on roofs are a common site in Panama City, December 31, 2018

Bense and son-in-law Will Weatherford (himself a former House Speaker) along with former Congresswoman Gwen Graham and state Senator Bill Montford have created the “REBUILD 850” initiative to help.  “This is an opportunity for the private sector to step-up, to help raise $1 million to help the working men and women of the region.  FEMA is helping but it takes a while to grind through the process,” said Bense.

One casualty was the region’s big timber industry.  “Tree farmers are getting murdered.  They are trying to take the downed trees to the mills, but they’re getting 20- to 40-cents on the dollar.  Crop insurance is not common for tree farms, given the longevity of the crop,” Bense said.

On the bright side, Bense noted that Panama City Beach received very little damage and continues to bring revenue to Bay County. “It was almost like an invisible wall existed on the bay separating Panama City from Panama City Beach,” he noted.  For more information or to donate, visit www.rebuild850.org.

Of course, as we know, Panama City suffered heavy damage from the hurricane’s 155 mph winds.  I returned on New Year’s Eve to visit a few places I’d missed seeing in previous post-Michael visits.  It still looks like a war-zone in places, as evidenced by the pictures I’ve included here from my visit.  This brief one-minute video tours a damaged storefront where you can see the merchandise still stacked on shelves much as it was before the hurricane struck nearly three months ago.  Bense reiterated what we’ve heard a lot: the structures that survived were all built to new building codes in the last five years but especially during the last two years. 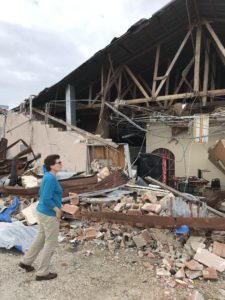 Examining the remnant shell of a retail store in Panama City, December 31, 2018

While there I chatted with Sharon Churchwell, who is executive assistant extraordinaire to Panama City Manager Mark McQueen.  She and I talked about how regular folks like us who live in Tallahassee can help tidy up a bit in Panama City.  The idea is simply sweeping the sidewalks!  All of us know that strolling down our clean sidewalks is truly a quality of life value.�� So if you’d like to grab a broom, a dust pan and a trash bag and join us this Saturday, January 12,  a group of us will be meeting on the west side of Tallahassee to carpool to Panama City to volunteer to “Sweep the Sidewalks” for the day.  Please email me ([email protected]) for details.  It will be a lot of fun.

Rebuilding is well underway.  In Gulf County, just east of ground zero’s Mexico Beach, the building department has issued more than 200 permits since the October 10 storm and is seeing about 100 people per day.   The County Commission has passed an emergency ordinance approving preliminary FEMA flood maps requiring property owners build at least two feet about their property’s base flood elevation for those seeking permits in the next 12 months.   The ordinance is short-term while the county evaluates continued objections to proposed FEMA maps countywide.

In Mexico Beach itself, the St. Joe Company has announced it will build a new community just north of coastal Highway 98 as you enter the town.  Plans call for about 400 apartments, villas, townhomes, and some retail to help replace what was lost to the storm – especially those areas south of Highway 98, the more lucrative coastal real estate.   The developer says it could take less than a year to build. 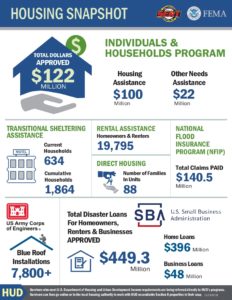 By an extended mid-December deadline, FEMA received a total of almost 102,000 requests for disaster assistance, about a third less than they predicted right after the storm.  Of those, 25,000 were housing assistance totaling more than $100 million and 13,500 were for Other Needs Assistance, such as repair and replacement of damaged items, for $22 million.  More on the chart at right (and see FEMA’s three programs of disaster assistance).  The Small Business Administration received 21,848 loan applications by its deadline, with over $464.5 million approved, including more than $408 million to homeowners and renters and over $51 million to businesses.