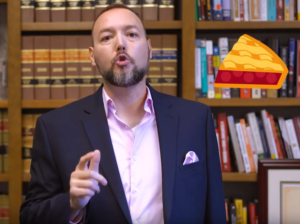 In my 40 year career (I had my first job in the Florida Capitol building when I was 18 and I turned 60 January 9!) I have come to respect and enjoyed a great working relationship with lawyers who represent policyholders and are part of what is called the plaintiff’s bar.  To this day I rely on their input as I work on balanced insurance public policy and appreciate their feedback and input every step of the way.  Those in the plaintiff’s bar that I work with regularly agree with me that some firms are just out of whack.  And the same goes for the insurance defense bar, too!

I kept this perspective in mind as I listened to the lively debate this past week on whether the Florida Legislature should limit the use of contingency fee multipliers in insurance claims lawsuits.  We talked about SB 914 in last week’s newsletter and there’s an update in this week’s Bill Watch.  Meanwhile, a coalition group “Floridians for Lawsuit Reform” premiered a funny video, featuring a dead-on actor portrayal of the reality of Florida’s homeowners insurance market: https://m.youtube.com/watch?v=4z0iDDxKHFg.

Those regular newsletter readers know well how sick and tired I am of people being taken advantage of by litigation for profit schemes.  If circumstances weren’t so dire amid our growing concern about Florida’s property insurance market, this video would be even funnier.  A survey of Floridians overwhelmingly agree as you’ll see in this newsletter as well.

For those who think that last year’s AOB reform will take care of the problem – it won’t, despite making encouraging progress so far.  We’re now seeing new strategies by contractors and their attorneys to work around the reforms.  On the other side, contractors complain that without the “old AOB,” they’re getting shortchanged by insurance companies and homeowners for work they’ve already performed.

I sat down recently with two attorneys – one insurance defense and the other plaintiff – to talk about the impact AOB reform has had so far, its unintended consequences, and the potential solutions to ongoing claims problems.  You can click below to listen and read the Show Notes here.

Tanaz Salehi and Mohammad Sherif are experts who’ve been out in the field dealing with these property insurance claims – both before and after AOB reform.   Our on-air brainstorming produced some fresh insights and they both offered “alternative AOB” documents that should be helpful to attorneys, claims handlers, contractors, and homeowners alike.  Tanaz also contributed a piece in this morning’s newsletter on a court recently denying an insurance company’s request to strike AOB attorney fees.

Lisa Miller and Associates is attacking this on two fronts: going after the bad actors AND offering constructive ideas and solutions from different voices on alternatives to AOB and costly litigation.  Give me a call (850-528-9229) and let’s work together on this!