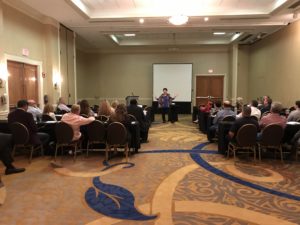 In between legislative sessions finds me on the road nearly every week.  This past week I was in South Florida meeting with clients, legislators, and touching base with colleagues and old friends, and of course, meeting new ones!  We discussed issues of mutual interest and concern and for me these visits allow an opportunity, unrushed by the session, to listen and really form meaningful dialogue and relationships.

This past Thursday night I had the pleasure of listening to former Governor Jeb Bush, who keynoted the Florida Association for Insurance Reform (FAIR) Sixth Annual Awards Gala and Benefit to support the educational mission of the FAIR Foundation, a 501(c)3 non-profit organization dedicated to creating safer, more resilient communities through education mitigation, and reducing uninsured risk.

Governor Bush served during the eight hurricanes that struck Florida in 2004-2005.  Today, as he did then, he stresses resiliency and mitigation as the best ways to prepare for hurricanes.  His message: how can we get to the point where we can all watch the storm outside our window rather than be in a shelter?  He shared that during Hurricane Irma last year, he took his grandchildren to his downtown Miami condominium and watched the storm’s 100 mph winds from behind the safety of impact resistant windows.

Earlier in the day and the day before, I attended the annual Florida Chamber of Commerce Insurance Summit, where how to manage risk in all its varying forms, from reinsurance to Cat to AOB abuse was the underlying theme.  There were lots of great informational topics but the highlights were the two luncheon speakers: former St. Petersburg Mayor Rick Baker and Agriculture and Consumer Services Commissioner-elect Nikki Fried.

Baker has written a new book Beyond the Sunshine, which is a 300-page timeline of Florida history.  He literally walked us through the highlights of Sunshine State history in a very easy to understand way.

Fried is the first elected woman to hold the Agriculture Commissioner position and the first Democrat to hold that office in 17 years.  She’s a former Fort Lauderdale defense lawyer turned lobbyist and most recently represented the medical marijuana industry.  She lobbied insurance issues as well and I remember working with Nikki over the years.  She’s smart, a hard-worker, and is used to reaching across the aisle.

Earlier in the week, I was in the field with some insurance agents listening and sharing with them stories on flood mitigation, the hurricanes, and AOB abuse.  I had the pleasure of teaching a class with Joe Petrelli, President of Demotech, the country’s most innovative insurance company financial stability ratings firm.  We taught an audience of independent insurance agents, all of them small agencies servicing 200-800 clients and each with less than five employees.

One of them was a former Revlon cosmetics executive who successfully launched a second career in insurance.  Another moved from Ecuador 16 years ago, and is now president of the Latin American Agents Association.  Another one, who focuses on South Florida’s Asian community, has almost 1,000 customers by herself.  She said she doesn’t use E-sign, making her customers come to the office “because I want to look them in the eye to make sure they know what they are buying,” she shared.

Joe walked the agents through an insurance company’s financial statement line by line so they could see the big picture and better understand the key indicators of insurer financial stability.

These agents are the backbone and the shoulders of the people taking care of our insurance customers every day.  Artificial intelligence, algorithms, and other technological advances will never replace the essence of what an insurance agent does – which is take care of people!  If you’re interested in us coming to your town, please let us know.