Damage estimates up to $25B; only half insured

The most recent data call report shows there have been 113,000 Florida insurance claims filed with total estimated insured losses of $2.35 billion.  About 30% of those claims are now closed, and 75% of those were paid.  Bay County, which got hit hardest by Hurricane Michael’s 155 mph winds and 9+ foot storm surge, is responsible for 60% of the claims filed so far.  But we’re finding that many homeowners and businesses didn’t have insurance, because of the cost or the age and condition of the structure.

Artemis media service reports the average cost per claim is around $101,600.  Initial estimates of insured losses of $6 billion to $10 billion are still holding.  Bloomberg reports that an additional $3 billion will fall on the National Flood Insurance Program, which has 60,000 policies in the impacted areas.  But again, these are estimates of only insured losses.  Chuck Watson, a disaster modeler with Enki Research in Savannah, Georgia said the hurricane will cost $25 billion and that only about half of the damage will probably be covered by insurance.

Citizens Property Insurance, the state’s insurer of last resort, said it believes it has already received the majority of its hurricane claims.  As of last Monday, Citizens had reported 3,231 claims from Michael, with 28% closed (and a tad more than half of those closed with payment) and an average payout of $33,412.  Of Citizens 4,466 policies in force in the 12-county panhandle impacted by hurricane force winds, nearly two-thirds have filed claims. 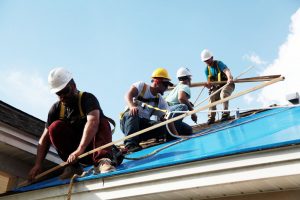 Roof tarps have been in high demand to stop further damage from subsequent rain, especially the downpours of this past Thursday.  Tarp donations have been coming in from all over but not necessarily the manpower to install them.  FEMA’s blue tarp program as of early last week was still not fully operational with deployment of federal tarping crews.

The U.S. Department of Housing and Urban Development has issued a 90-day moratorium on foreclosures of Federal Housing Administration-insured home mortgages. Borrowers who need to make expensive repairs to an existing home or purchase a new home because of storm damage can apply for so-called Section 203(h) mortgages that require no down payment.

The Small Business Administration (SBA) is making below market-rate loans available for eligible small businesses and also for homeowners who need temporary funding while they await checks from their insurance companies.  But those who didn’t have insurance – and again, indications are that’s a significant number – likely don’t qualify for an SBA disaster loan for physical damage.   Homeowners who need to make expensive repairs or purchase a new home due to storm damage can apply for Section 203(h) mortgages that require no down payment.  This Panama City News Herald article has good information on funding resources available and who can qualify for which state and federal aid programs.

Most of the panhandle impacted by Hurricane Michael is rural, which was a blessing in terms of human lives at risk and expensive buildings, but it has taken a toll on agricultural interests, especially cotton growers.  A University of Florida study estimates nearly one million acres of crops, as well as beef and dairy products suffered damage in 25 counties.  Damage estimates are $158 million.

While there’s no hard figures, the panhandle’s fishing and aquaculture industries have taken a hit too, not just in terms of physical damage to boats, docks, and fisheries, but also from the drop-off in tourism after the storm.  Florida has asked the U.S. Commerce Department to issue a federal fishery resource disaster that could make fisheries eligible for disaster assistance and other federal programs.