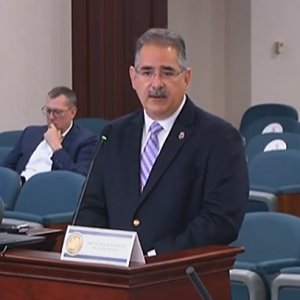 Colonel Simon Blank speaks before the House Insurance and Banking Subcommittee on October 20, 2021

One of the keys to further reforming Florida’s homeowners property insurance marketplace is tackling the growing fraud by a small but determined number of contractors.  There’s new insight on how further expanding the state’s fraud investigation efforts would help.  Plus, some lessons from Louisiana, post-Hurricane Ida and a warning that reinsurance rates will likely increase by double-digits in the New Year.

Fighting Fraud: One of the things the legislature could do in this upcoming January session is fund more fraud investigators as it did last session.  Lawmakers heard testimony this fall on the overwhelming number of property insurance fraud referrals that the Department of Financial Services (DFS) is receiving vs. the staff available to tackle what are often complex cases requiring proof beyond reasonable measure in court.

The head of the DFS Division of Investigative & Forensic Services, Colonel Simon Blank, testified before the House Insurance and Banking Subcommittee that his team is currently working with more than 100 victims of contractor insurance fraud, a large number of them elderly, totaling about $4 million to $5 million in theft.  Last year the legislature appropriated money to create two additional fraud squads – one in Tampa and the other in Orlando – each with five detectives and headed by a lieutenant.

“These teams are working some significant cases…but they are complicated, time-consuming cases, requiring proof beyond a reasonable doubt for prosecutors to secure convictions,” he said.  Blank testified that of the 1,786 homeowners fraud referrals to his division in the last fiscal year, they opened 124 cases, presented 40 cases to various state attorneys, made 32 arrests, and had 14 convictions.  Sometimes these contractors work in concert with attorneys and public adjusters.

Despite his team’s aggressive efforts, Colonel Blank said beyond the legislature updating state statutes to keep up with the times, it boils down to resources.  “We have 84 detectives doing insurance fraud in the state of Florida, (for a population of) 21 million people.  They investigate homeowners, health, licensee.  It doesn’t take a lot for you to see that we’re pretty stretched thin,” he told lawmakers.  Spend literally a minute of your time now to watch Colonel Blank (go to timecode 27:02-28:05) as he shares a real-life classic scam case they just handled.

As Goes Louisiana, So Goes Florida: The state of Louisiana is passing along $100 million in Hurricane Ida claims that were left unpaid by two insurance companies that became insolvent following the August Category 4 storm.  The same happened here in Florida, where three property & casualty insurance companies became insolvent this year – not from storms but from rising costs – forcing the Florida Insurance Guaranty Association (FIGA) to increase premium assessments by 0.7% to its member insurance companies to help re-balance the fund.  Insurance companies will pass along the assessment surcharge to their policyholders beginning with the January 2022 policy renewals.  But there’s an additional risk: Despite its current healthy reserves and surplus, our state-backed Citizens Insurance is one big hurricane in a metro area away from having to assess every insurance consumer in Florida to pitch in and pay for claims.  That’s why a healthy private homeowners market is crucial to keeping Citizens’ rapidly growing policyholder count (741,420 as of Nov. 30) in check.

Reinsurance Rising: Fitch Ratings reports reinsurance rates are expected to increase by more than 10% in upcoming January renewals.  “We expect double-digit percentage premium rate rises for property-catastrophe cover in 2022 due to the insured losses of around US$100 billion in 2021 and the prospect of natural catastrophe claims increasing in frequency and severity,” said Fitch in its market summary.

We’ll explore which bills have been filed – and which haven’t – for the upcoming Florida Legislative session to address these issues in the premier of the 2022 Bill Watch, up next.