Plus a new look at flood rate inadequacy

With the news that FEMA is delaying the premier of its new flood insurance rates from April 1 to October 1 –  and phasing them in – comes new details on exactly how its Risk Rating 2.0 program will work, to bring more actuarially-sound rates to the National Flood Insurance Program (NFIP).  There’s also a new report showing current NFIP rates are grossly inadequate by a factor of 4.5, while flood risks here in Florida and the U.S. continue to grow.  Plus the new edition of the Flood Insurance Manual is out.  It’s all in this week’s Flood News update.

Risk Rating 2.0: A new report by the Congressional Research Service analyzes the NFIP’s new Risk Rating 2.0 program that will base the flood insurance rate on individual property-specific risks instead of the flood zone the property is in on a decades-old Flood Insurance Rate Map.

The premium will be calculated based on the features of an individual property’s structure, including the foundation type, the height of the lowest floor relative to base flood elevation, and the replacement cost value of the structure.  The current rating system includes two sources of flood risk: the 1%-annual-chance fluvial (river) flood and the 1%-annual-chance coastal flood.  Risk Rating 2.0 will instead incorporate a broader range of flood frequencies and sources as well as geographical variables such as the distance to water, the type and size of nearest bodies of water, and the elevation of the property relative to the flooding source.

According to FEMA, although mapped flood zones will no longer be used to calculate a property’s flood insurance premium, flood zones will still be used for floodplain management purposes, and the boundary of the Special Flood Hazard Area will still be required for the mandatory purchase requirement.    Risk Rating 2.0 will continue the overall policy of phasing out NFIP subsidies under the current Biggert Waters I & II Acts, but won’t be able to increase rates faster than the existing limit for primary residences of 5%-18% increases annually.

Current NFIP Rates Inadequate: New research by the nonprofit First Street Foundation confirms that the NFIP doesn’t charge enough premium to cover actual flood risks and resulting costs.  Its report The Cost of Climate calculated the average annual loss statistics for each of the 4.3 million residential properties in the lower 48 states. It found that if all of them were insured by the NFIP, its rates would need to increase 4.5 times to cover the risk.  The report is chock full of interesting data, including overviews of each state (Florida’s is on pages 38-39). 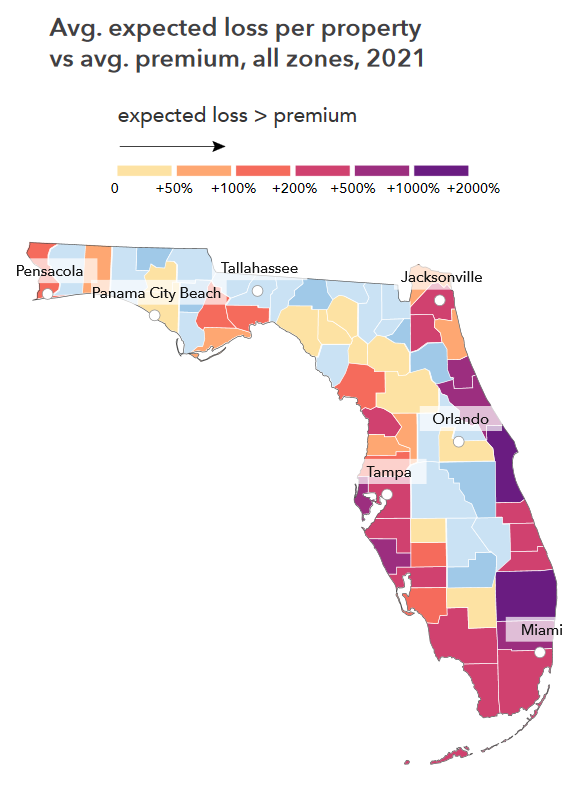 In Miami-Dade County, the report found the average NFIP premium for a Miami resident is $1,069 a year when it should really be nearly $1,500.  The average premium for a Miami Beach resident though is up to $20,000 less than it actuarially should be.  Yet in South Miami, First Street found that residents there on average are paying 16% too much compared to the actual risk.  You can read more in this latest Insurance Journal article Study: Floridians in Flood Zones Underpaying for Flood Insurance by Average of 379%

Updated NFIP Flood Manual: FEMA it out with the latest update to the NFIP’s Flood Insurance Manual.  It incorporates the minimal program changes announced in October 2020, including the list of eligibility requirements to the Community Rating System, premium rates, and severe repetitive loss premium and reserve fund assessments.