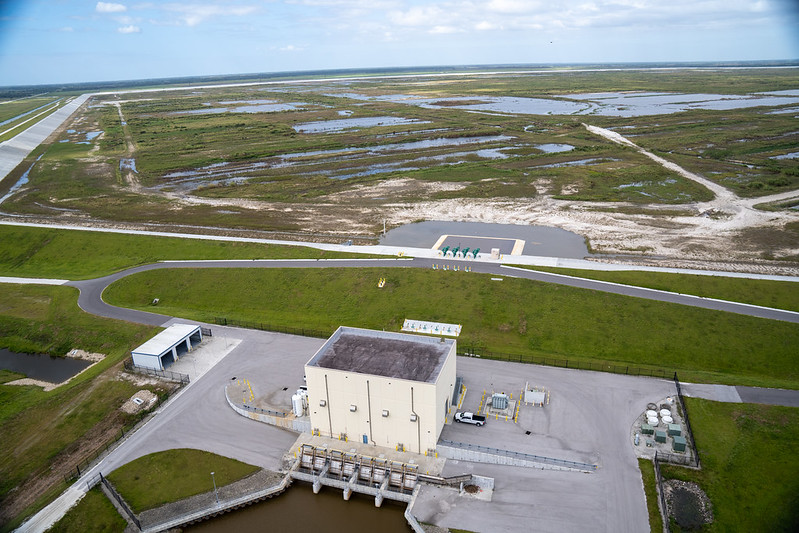 The discharge facility (foreground) into the C-44 St. Lucie Canal with the new reservoir behind it and Lake Okeechobee in the background. Courtesy, South Florida Water Management District

The U.S. Army Corps of Engineers with the state of Florida has totally completed the first of 68 projects in the Comprehensive Everglades Restoration Plan (CERP) with the opening of a new reservoir a week ago in Martin County.  The reservoir sits between Lake Okeechobee and the St. Lucie Canal (C-44) and will hold and cleanse algae runoffs from Lake O before they enter the St. Lucie River and ultimately the Indian River Lagoon, the scene of nasty, unhealthy algae blooms during summer months.  The $339 million project encompasses 12,000 acres and can store 19.7 billion gallons of water.  Plants, such as cattails, will naturally cleanse the water from the estimated 35 metric tons of phosphorous each year.

The Corps also recently announced its sweeping management overhaul of Lake O in its Lake Okeechobee System Operating Manual.  Now that repairs to the Hoover Dike surrounding Lake O are almost finished, the Corps says it will be safe to raise the lake’s water levels.  The Manual calls for increasing water discharges south directly into the Everglades and reducing discharges to both the St. Lucie River to the east and the Caloosahatchee River to the west, where the nutrient-laden lake water had generated plagues of thick green algae. 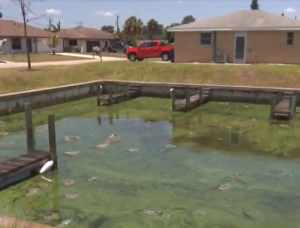 Blue-Green Algae in a lagoon off the Caloosahatchee River in Ft. Myers

Meanwhile, the Governor has announced he wants the state to invest $660 million for Everglades restoration next year, including the CERP above, the Everglades Agricultural Area (EAA) Reservoir Project, and the Lake Okeechobee Watershed Restoration Project.  It’s part of a $960 million plan for protecting water quality, that also includes:

In addition, the Governor wants to put another $550 million into the “Resilient Florida” program to protect coastal and inland communities from the effects of sea-level rise, more intense storms, and the flooding that results.  This includes more than $50 million in resiliency planning and to protect coral reefs.

The rest of the Governor’s budget requests for the next fiscal year starting July 1, 2022 are due December 12 to the legislature for its consideration in the upcoming 60-day legislative session that starts January 11.