The latest sea level rise estimates are out from NOAA and they don’t look good, especially along Florida’s Gulf Coast; Miami-Dade County is contemplating a new minimum height for buildings and roads; and how this current period of more severe weather could push flood losses in the U.S. to $40 billion in the next 30 years.  It’s all in this week’s Flood Digest.

Rising Sea Levels: The National Oceanic and Atmospheric Administration (NOAA) is out with its 2022 Sea Level Rise Technical Report with updated projections for all U.S. coastal waters through 2150.  The report concludes that sea level along the U.S. coast is projected to rise 10-12 inches on average from 2020-2050, which is about how much it rose over the last 100 years.  The Gulf Coast will have the largest increase of all coasts with an estimated 14”-18” rise.  Tide and storm surge heights are also projected to increase and reach further inland, creating more than 10 times the number of “moderate” (typically damaging) flooding events.  The report includes information to help communities assess potential changes in average tide heights and height-specific threshold frequencies as they strive to adapt to sea level rise. 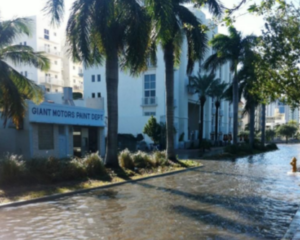 How Miami-Dade is Reacting: Miami-Dade County’s Division of Environmental Resources Management has been looking at reports like NOAA’s and are now proposing changes to help make the county more flood resilient.  They want to increase the minimum elevation from its current 3.45 feet to 6 feet for everything from roads to sea walls to vacant lots awaiting new construction.  Most lots already meet or come close to that height, but those that don’t are susceptible to flooding from a projected 10 year storm event by 2060.  The plan is expected to be presented to the county commission later this year and would only apply to new construction or major renovations.  It would be the rule for all unincorporated areas of the county and in any municipality that uses the county’s flood criteria in its code, which is about a third of the municipalities in the county, including the city of Miami.  You can read more in the Miami Herald.

More Flooding, More Insurance Losses: A research team led by the University of Bristol has concluded that this period of climate change could increase annual flood losses in the U.S. by 26.4%, from their current $32 billion to $40.6 billion in less than 30 years.  The estimates include damage to homes, businesses and content. The report is based on flood models and national property asset data.  Researchers say they found the most danger is currently in poorer communities and that future increased risk will have a greater impact on African American communities on the Atlantic and Gulf Coasts.