Plus news from the National Flood Conference & OIR

The past two weeks have seen significant developments in flood insurance.  The National Flood Insurance Program (NFIP) has released long-sought geographic-specific data on its policies and claims going back decades.  Congress has reauthorized the NFIP through September and is making serious progress on a long-term five year reauthorization.  And at the annual National Flood Conference in Washington D.C., I saw significant optimism about enacting needed NFIP reforms and the role private carriers can play in the flood insurance marketplace going forward.

After several years of delays, FEMA last week released NFIP data that includes more than two million claims records dating back to 1978 and more than 47 million policy records for transactions from the past ten years.  Private insurance companies and others have been seeking this data for more than a decade, in efforts to better determine actual risks and costs of flood insurance.  The new data is available on the OpenFEMA website.

The data is in a machine-readable format and allows analysis of how coverage has changed in a geographic area and where NFIP claims have been filed for more than 40 years.  It includes fields such as state, census tract, zip code, year of loss, and amount paid on claims. The data will be updated every 45 to 60 days and delivers the most specific amount of geographic data possible, FEMA says, while preserving policyholder anonymity, which had been the big holdup.

“The proactive publication of this data will assist the private market to grow in the flood insurance space and help close the insurance gap.  The private market will now be able to identify areas with prior flood claims and historical flood insurance policies,” said David Maurstad, FEMA’s Deputy Associate Administrator for Insurance and Mitigation, in a prepared statement.

A fully developed private flood insurance market in all 50 states is vital to long-term NFIP success, as I noted in an interview with Bloomberg Environment published last week on Congress’ efforts to overhaul the NFIP.  The U.S. House Financial Services Committee has approved two measures that would overhaul the financially-troubled NFIP and reauthorize the program for five years.  The measures now go to the full House but face a big fight in the Senate over its lighter cap on premiums and get-tougher approach on repetitive loss properties. 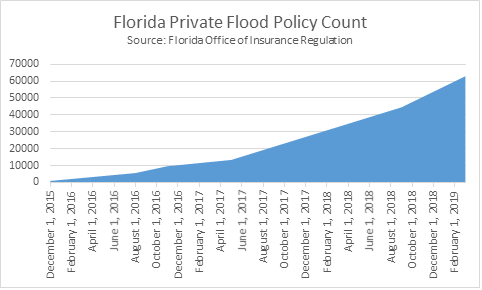 A private market provides a crucial complement and alternative to NFIP, as we continue to advocate here at Lisa Miller & Associates.  Florida’s private flood insurance market has made terrific progress in the barely four years since passage of two key laws (SB 1094 and SB 542) to encourage competition, as noted by this chart at right.  The total figure changes every day and our estimates are that we are approaching 100,000 policies!

I shared my wish with Bloomberg that Congress’ legislation do more to speed the privatization of flood insurance.  At the same time, a measure to cancel the program’s $20 billion debt to the U.S. Treasury (later withdrawn) would have amounted to a giant subsidy borne by taxpayers who received no benefit from doing so.   The 1.7 million Florida residents who comprise the largest group of NFIP’s five million policyholders, traditionally pay $4 in premium for every $1 in claims payment received. 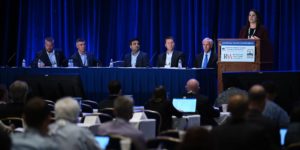 The “NFIP Reform and Reauthorization – Where Do We Go From Here?” panel at the National Flood Conference, June 3, 2019

It’s why the NFIP’s Risk Rating 2.0 program that’s in the works for next year is such a good step in the right direction.  It bases rates more granularly by individual property using computer modeling, instead of old FIRM maps.  At the National Flood Conference in Washington D.C. earlier this month, there was a session specifically on this modernized approach and what it means to policyholders.  It’s not just about using the latest catastrophe modeling to better price risk.  It’s also about improving a variety of FEMA/NFIP internal processes and oversight, including use of outside contractors.  There is no doubt significant progress has been made to what has been a very outdated system.

My favorite session from the conference was Dr. Lebron Lackey, a radiologist whose house was left standing after Hurricane Michael hit Mexico Beach, Florida last October.   Named “The Sand Palace”, it was built to survive 250 mph winds.  So it withstood Michael’s 160 mph Cat-5 winds and was the only house really left standing.  It exceeded current code in many respects.  The foundation is pre-stressed concrete with 4- strand steel coils.  He spent an additional $18,000 to use 40 foot pilings (the code is 30 foot), allowing an elevation 12 feet above the ground.  Other features include insulated concrete form (ICF) block, which stack like legos, and the rebar is laid vertically, creating a steel weave.  So the base is all concrete and steel. 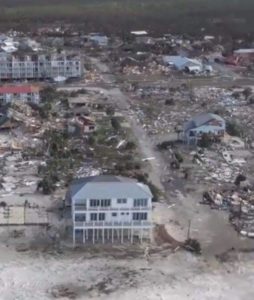 His ground floor was a total loss from the surge.  He lost two HVAC units and utility connections.  The grade level concrete was scoured but most of the patio paver driveway remained intact.  A quarter of his east-facing roof suffered minor damage, as well as two top floor windows and one second floor window – but they held!  He said the old adage of a chain being no stronger than its weakest link is so true and added, from observing nearby homes, that if you lose the pilings, you lose the house.

Dr. Lackey evacuated from Florida before Michael struck but was watching it from his smart phone.  “I need to convince you as people who influence decision makers to tell them that we can do better, Dr. Lackey said.  This storm is not a 15-second wind event.  It was two to three hours of hurricane wind, elements, and storm surge.”  What a guy!  His story has been in the New York Times, which is among the more than 100 media outlets that he says have been in touch with him.   He is a true mitigation evangelist!