While the Florida Office of Insurance Regulation (OIR) has adopted a wait-and-see stance now that the Supreme Court has taken up the Assignment of Benefits (AOB) issue, it devoted a lot of attention to the issue at its annual Summit this past week and there is much encouraging news to report on this and other critical insurance issues in the Sunshine State.

Insurance Commissioner David Altmaier presented the latest relevant statistics and OIR staff analysis during a special summit session devoted to AOB issues and abuse.  OIR has noted a 42% increase in water losses each year over a two-year period.  “Clearly these trends are driving deterioration in the underwriting results of carriers,” Altmaier said.

Altmaier said, when researching the trends to explain AOB’s exponential use and abuse, that OIR looked at older homes, as an example, to determine if aging housing stock was a trend correlated to AOB’s growth.  OIR found there was no difference in water loss trends in newer vs older houses.  In fact, Altmaier said the newer houses have it worse than the older ones.

OIR had heard another trend that policy forms were not consumer friendly so Property & Casualty division staff studied this assertion and found nothing to substantiate this claim.  OIR determined that: 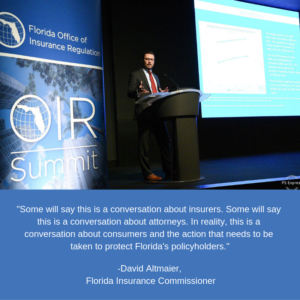 Altmaier noted that the increased trend in severity and frequency is now spreading to other Florida counties beyond the original “ground zero” tri-county area (Miami-Dade, Broward, and Palm Beach counties).  .

Overall claims have increased from 12% to 17% since 2015.  Litigated claims with an AOB or with attorney representation at FNOL rose from 2014-2015 and remains at higher levels in 2018.   This is reflected as well in claims with attorneys at FNOL coming into Citizens Property Insurance, the state’s insurer of last resort.

The number of AOB-related water and auto windshield litigation claims rose from 400 in 2006 to 28,000 by 2016.   Litigated payouts in 2018 are running triple the amount of non-litigated claims, including attorney fees, Altmaier said, with no accompanying increase in consumer complaints.

To be clear, this increase in the use and abuse of AOBs and attorneys is impacting consumer insurance rates in Florida.  In 2014, OIR approved rate decreases for more than half of the rate filings that year.  By 2016-2017, more than 90% of approved filings were rate increases.

The trend threatens to drive private insurers out of certain markets and is reversing the progress made in depopulating Citizens, which is under a legislatively-mandated rate increase cap of 10% annually.

“Even though we’ve been calling it an AOB issue for the past several years now, in my opinion, it really is more appropriate to call it an excessive litigation issue,” he said, noting that Florida’s one-way attorney fee law was never intended to benefit third parties.

“It’s fine for consumers to assign their benefits. It’s fine for those third parties to ultimately litigate against their insurance companies. But we believe, at this point in time, that litigation should be treated the same way that any other commercial litigation is treated,” Altmaier said.

Florida’s insurance commissioner made it clear he believes the fix is through a legislative solution that deals with attorney fees and “removing the carrot to eliminate this behavior.”  Key insurance legislative leadership, including Senator Jeff Brandes (R-Pinellas) expressed optimism that progress will be made on AOB and one-way attorney fee reforms this session.  More in this edition’s Bill Watch.

There were other important topics discussed at the OIR Summit.  Artificial intelligence (AI) is expected to be a game-changer over the next 5-10 years.  Automated vehicles (i.e. driverless cars) will be less likely to get into accidents and so policies will have to adapt.  It could be that the car you purchase one day will include insurance in the purchase price.

AI is also playing a role in drones and Florida wants a piece of the action.  State officials are proposing Miami as a test site for passenger drone service, with news that developers are already planning rooftop landing pads in anticipation of this future mode of travel.