Not quite yet in Florida 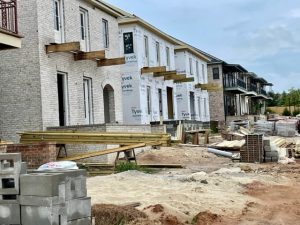 As housing markets across the country are slowing, Florida is still showing price growth, albeit smaller than it has been over the past year, as the housing market appears to be reaching an equilibrium according to experts.  On the rental front, the dramatic increases are likewise cooling, as more apartments come on line.

While housing prices have peaked or are declining in many cities across the country, Florida’s prices remain high.  The latest monthly study by Florida Atlantic University and Florida International University shows Florida’s housing markets remain among the most overpriced in the nation, comparing the expected price with the actual price, represented as the “premium” buyers are paying.

Fort Myers came in third highest in the nation at a 62% premium, with Lakeland ranking 7th at 59%, Tampa ranking 9th at 58.5%, and the North Port-Sarasota-Bradenton area ranking 11th nationally at almost 56%.  No Florida city was among the 27 markets that experienced premium declines, most of which were west of the Mississippi River.

“We are at the turning point. The likelihood of significant price increases in the near future grows smaller by the day,” said FAU economist Ken Johnson.

On the rental side, Johnson and his team have similar observations of an easing, although slight, with high rents still a problem across the U.S.  July rankings show Florida had eight of the 10 largest annual rent increases in the country.  Fort Myers and Miami continued to lead the list with increases of 25.22% and 24.61%, respectively.  But over the past six months, Fort Myers’ average rent rose only 7%, while Miami’s average was up a bit over 8%, “indicating the worst of the rent hikes occurred more than six months ago,” according to the FAU release.

“Population movements and rental-unit shortages appear to be the two big drivers of rent increases,” said economist Bennie Waller of the University of Alabama.  “Simply put, folks are moving to areas that are lagging in the development of rental units.  The resolution will probably take some time as the lag in inventory supply catches up in the Sun Belt states.”

According to RentCafe, Miami is slated to get about 19,000 new apartments by the end of the year, Orlando will have 11,388 coming on line, and Tampa shows just over 6,000 new apartments in 2022.  U.S. apartment construction is at a 50-year high.  The pandemic exacerbated the nation’s housing inventory due to labor shortages and supply-chain disruptions, but RentCafe notes apartment developers were generally able to ramp up the pace of construction in the past 18 months or so.