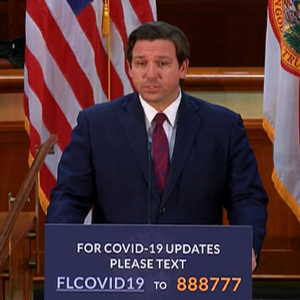 Last week was a busy one for Governor DeSantis and the 100 or so government, business, and industry group leaders who comprise his Re-Open Florida Task Force.  At week’s end, late Friday afternoon, the Governor said he and his staff will review the Task Force recommendations being compiled “to go forward in a safe and methodical way.”  When reporters pressed the issue of Florida reopening prior to the April 30 “stay at home” expiration, the Governor said “it’s more important to get it right.  I don’t have an artificial date.”

I sat-in on the series of Task Force teleconferences, which included an economic presentation by the Florida Chamber of Commerce.  Here’s the challenge: Two of the top four employment sectors in Florida (Accommodation & food plus Retail) happen to be the two most hugely vulnerable professions to spread the coronavirus. (See charts below.)  Complicating matters, 20% of the state’s tax receipts come from tourism and 79% of all general revenue comes from sales & use taxes (largely retail).  The Chamber predicts if all goes right, the state economy will be back at pre-virus levels by late December.  If it goes wrong, we’re looking at the middle of 2024.  (Wells Fargo’s Senior Economist Mark Vitner, in news reports said “We are looking for this recession to be incredibly sharp but fairly short, with a recovery taking hold by the end of the year.”) 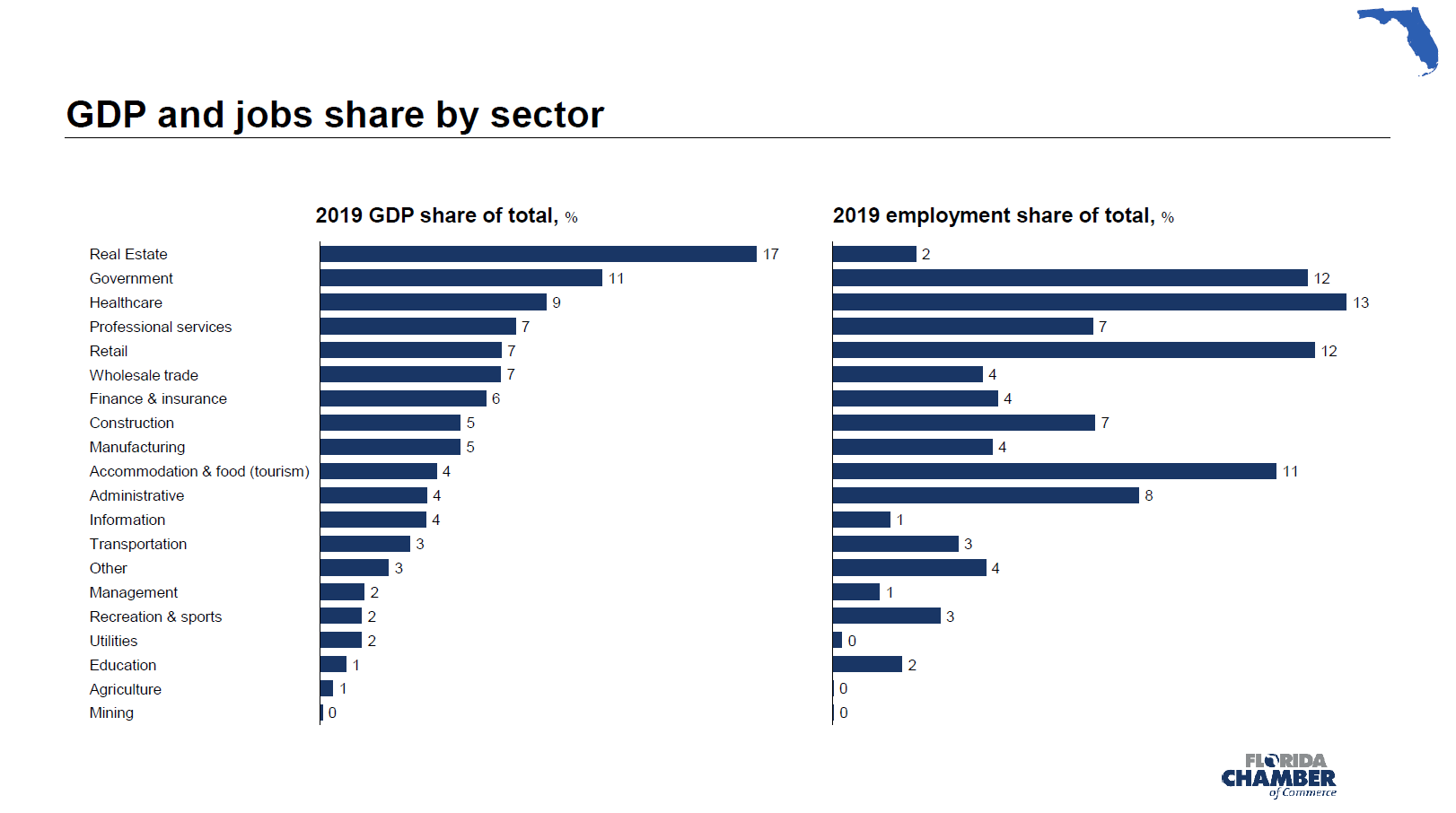 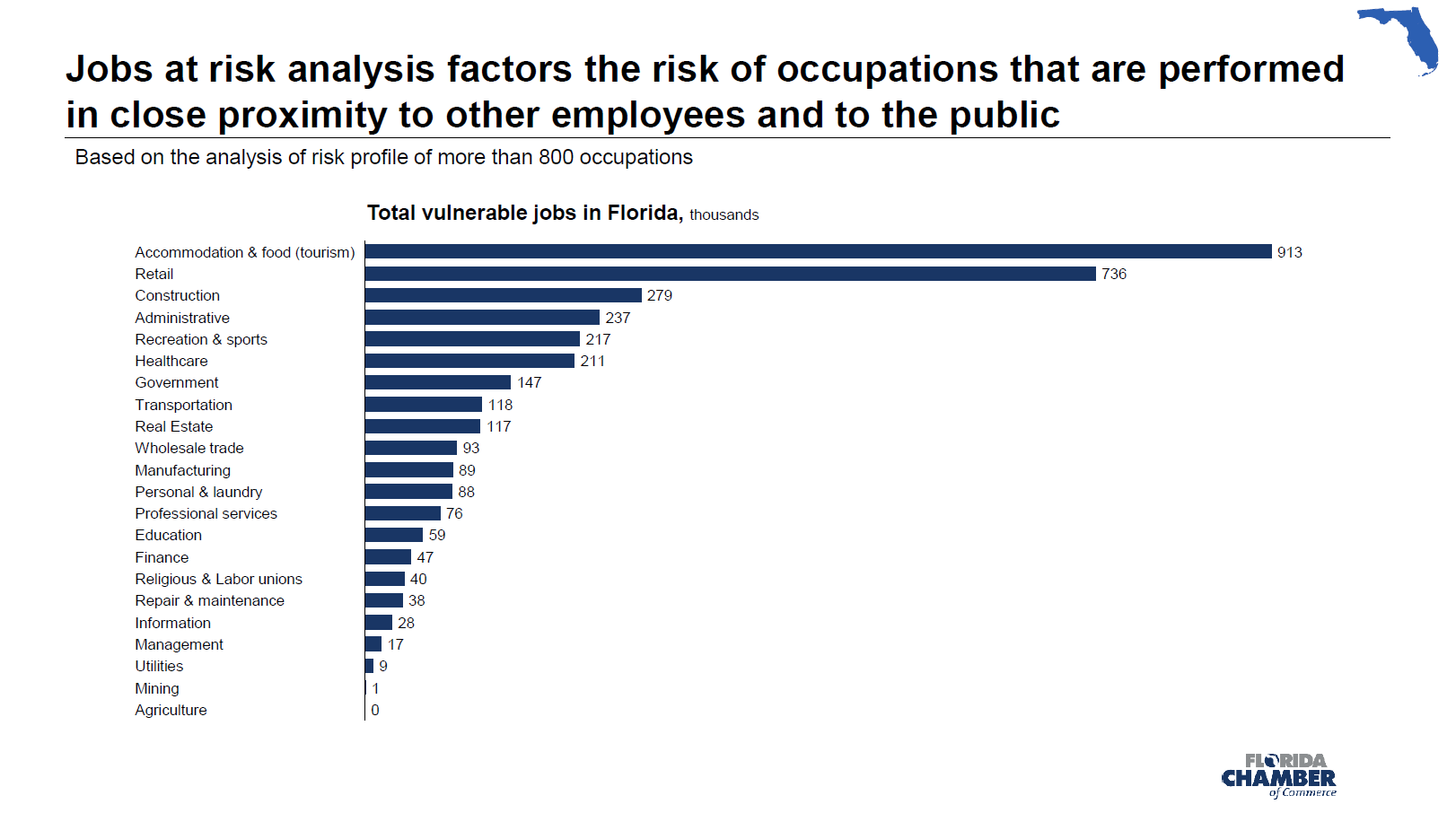 Alex Sanchez with the Florida Bankers Association told the Task Force that bankers are working around the clock processing the federal Paycheck Protection Program loan approvals.  He said Florida has processed as of last Monday about $18 billion in loans, the 4th highest number among the 50 states.

On the insurance side, Insurance Commissioner David Altmaier, who is also a Task Force member, said “We want to streamline our Office’s processes as much as possible.  We are looking at the long term COVID-19 impacts, as some issues could arise down the road as we attempt to return to normalcy.”  In the meantime, all six insurance Informational Memoranda remain in effect, with Altmaier noting health providers have expanded their use of telemedicine and all insurance companies have expanded behavioral health options.  He said it’s too early to tell what impact the virus will have on health insurance premiums.

Halsey Beshears, the Secretary of the state Department of Business and Professional Regulation suggested a surgical approach to re-opening Florida in this past Friday’s meeting of the Industry Working Group on Tourism, Construction, Real Estate, Recreation, Retail and Transportation, one of three working groups in the Task Force.  Harder hit counties in South Florida will need to wait until virus case numbers improve, but he argued that northern, more rural counties with fewer cases, could begin the reopening process under CDC guidelines.  He said that could include restaurants and hair and nail salons.  Suggestions for customer signage include: “No Shirt, No Shoes, No Mask, No Service.”  You can read more here. 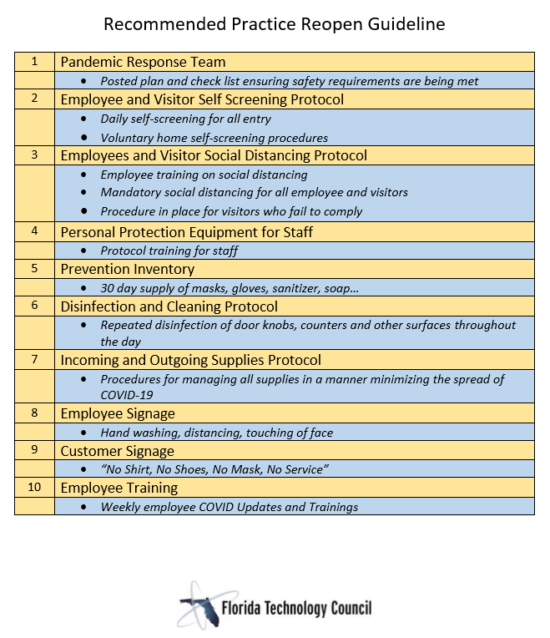 The Task Force members are submitting recommendations for a proposal being readied later this week for consideration by its Executive Committee on what a reopening of Florida should look like and when.  This past weekend a public comment submission portal opened for citizen and business input as well.

The Governor meanwhile, is directing the state Surgeon General to allow pharmacists to conduct COVID-19 testing. “I’m looking for ways to make testing as simple and plentiful as possible,” he said.

In a throwback to his news conferences of months’ past, the Governor had a new company announcement as well on Friday.  Aerion Supersonic is moving its global headquarters and a manufacturing facility to Melbourne, with 650 new Florida jobs averaging $105,000 in annual wages by 2026.  The company will make the world’s first privately built supersonic aircraft (air speed greater than 1,000 mph!).  Up, up, and away!

As the Governor said “We’re going to figure out a way to get back.”

Up next, more news you can use on insurance, disaster management, construction, and the environment, plus some smiles!