Beginning today, mortgage lenders are required to accept private flood insurance coverage as an acceptable substitute to National Flood Insurance Program (NFIP) coverage.  The NFIP is back in the news with a dubious new record: the average claim paid in 2017 surpassed $100,000.  It’s why private flood is catching on and why a national group of insurance legislators will be meeting next week to consider model legislation to ease the way.

The new federal law implements the Biggert-Waters Act requirement that regulated lending institutions accept private flood insurance policies that satisfy criteria specified in the Act.  Carriers provide written verification that their policies do so.  You can read the federal order here.

Despite the lender acceptance rule becoming effective, there is still reticence among the banking communities because of their uncertainty of private flood coverage.  This is the exact reason Lisa Miller & Associates is pushing a model bill before the National Council of Insurance Legislators (NCOIL).  The three page bill has five components: prior form approval; unregulated rates; mandatory agent education of their customers; insurance commissioner notification if a company wants to enter a state’s flood market; and insurance commissioner certification of the policy form that it meets or exceeds NFIP coverage.  This just makes sense to ease the way for a vibrant private market in all 50 states. 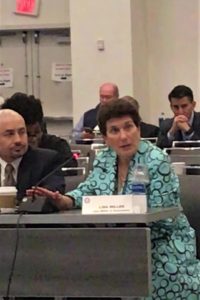 On July 11 in Newport Beach, California, NCOIL’s newly formed Special Committee on Natural Disaster Recovery will conduct a discussion of the model bill, with proponents saying it will go a long way in eliminating disputes and misunderstandings among regulators and stakeholders, and others saying all that is needed is a resolution.  LMA is an active supporter of the model bill, based on Florida’s successful laws, along with others who will be in attendance in California.

The need for a private flood market as an alternative and complement to the financially challenged NFIP has never been greater.  A recent E&E News analysis of NFIP 2017 claims data, shows the average claims payout was $110,815, a record for the 40 year-old federal program.   Of the $69.4 billion paid out since 1972, policyholders in Texas and Louisiana collected 51%, driven in part by the number of repetitive loss properties.  Adding in Florida, New Jersey, and New York brings the payout to 76% or $52.2 billion of the NFIP’s total payouts.

Clearly, this is unsustainable without additional massive taxpayer funded bailouts of the NFIP.  A Milliman report found that a majority of single-family homes in Texas, Louisiana, and Florida could see cheaper premiums with private insurance over NFIP.  In Florida, NFIP’s largest customer, 77% of homes could see cheaper rates.