The National Flood Insurance Program’s (NFIP) Risk Rating 2.0 is now in effect for renewal policies, Tampa Bay business leaders are calling for billions in flood control from sea level rise, another Florida city is well on its way in self-funding its resilience fund, and a new report shows how other communities can do the same.  It’s all in this week’s Flood Digest.

Risk Rating 2.0: The NFIP’s new model for better pricing rate to risk called Risk Rating 2.0: Equity in Action took effect April 1 for renewal policies.  Some homeowners will now be in flood zones and see rates increase while others will see decreases.  FEMA calls it a “transformational leap forward…enabling FEMA to set rates that are fairer and ensure rate increases and decreases are both equitable.”  The new rating system took effect last October for new NFIP policies.

Our firm had the privilege of being published last week in the Miami Herald and The Invading Sea with this opinion piece explaining that the new rates show little or no increase for Florida policyholders.  Nearly 96% of policyholders’ premiums in Florida will either decrease or increase by $20 or less per month.  The added protection and long-term savings: priceless.  Rate changes will be gradual over a 10-year period rather than the NFIP’s original 5-year plan, meaning that the private flood insurance market will certainly have a prominent role to play in the interim with their often competitive rates. 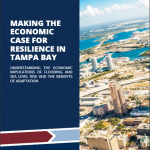 Tampa Bay Risk: The Tampa Bay Partnership, a group of civic and business leaders, is out with a new report Making the Economic Case for Resilience in Tampa Bay.  In it the group argues that the $13.4 billion needed to improve infrastructure to protect against sea level rise and storm surge is a wise investment that could save the region more than $2 for every $1 spent.  The report estimates property values in the six county region could drop $16.9 billion by 2070 from high-tide flooding alone and result in another $238 million annual loss of property, sales, and tax revenues.

The report identifies the best places to spend money on resilience.  They include raising and replacing seawalls, beach renourishment, building berms, and elevating homes in vulnerable low-laying areas.  The area is considered the most vulnerable in Florida to flooding from a direct hurricane hit.  Two engineering consulting firms, AECOM and Brizaga, partnered in producing the study, with a hand from the Tampa Bay Regional Planning Council.  Another example of industry innovation! 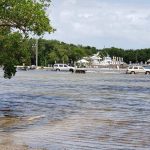 Go Fund Yourself! The city of Coral Gables, Florida has done just that.  Faced with “sunny day flooding” from King Tides and gradual sea level rise from its perch on Biscayne Bay, government leaders have created a resilience fund to finance adaptation and resilience projects down the road.  The fund is financed by stormwater and sanitation fees and has already grown to almost $10 million.  You can read more in the American Flood Coalition blog.

New report: The State Resilience Partnership released State Flood Resilience and Adaptation Planning: Challenges and Opportunities, a new report developed by the Urban Institute that examines the landscape and trends of statewide resilience plans.  The report coincides with the launch of SRP’s subpage on statewide flood planning and a checklist for state planners to better prepare for flooding.  It includes 148 state-level plans that address flooding as well as from in-depth interviews in Florida, Iowa, Colorado, North Carolina, and Washington.