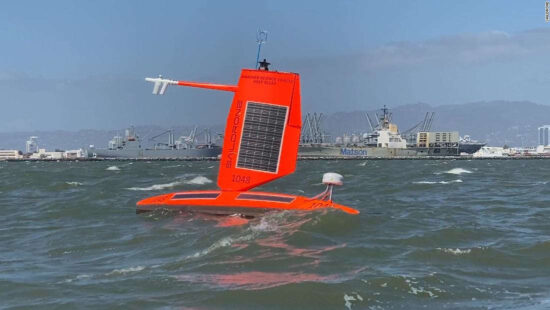 Traditionally, scientists have used manned aircraft to study hurricanes up close.  While storm data could be efficiently collected from the sky, purposely sailing into a hurricane from the ocean for a better look was too dangerous.  These challenges of the past have been revolutionized with the introduction of unmanned drones.

“If you’re in the center of a hurricane at those type of wind speeds, the ocean is just this big, frothy mess right there where the water begins and the air ends,” said National Oceanic and Atmospheric Administration director of engineering Chris Meinig.  A Silicon Valley startup called Saildrone has recently taken on the challenges with its unmanned autonomous ocean vessels.  Without the risk to human life of traditional hurricane sailing, Saildrones are built to withstand the toughest of winds, waves and currents that the ocean has to offer.

In an effort to study how heat and energy are exchanged between the ocean and the atmosphere, the vessels are 23-feet long and come equipped with four cameras in addition to tools used to measure wind and ocean temperatures.  The data collected from the Saildrone boats are streamed and analyzed in real time by drone operators.

Saildrone CEO Richard Jenkins said that the organization has primarily concerned itself with the nature of spray and foam present on the ocean water during a hurricane.  “No one’s ever observed what happens to waves of froth to spray in the center of a hurricane.  So we’re hoping that we can see with the camera what the water looks like,” he told CNN Business.  These studies took place in the Atlantic Ocean while Hurricane Ida raged in the Gulf of Mexico, leaving all five drones to survive the 2021 Hurricane season.

Saildrone has a new partnership with NOAA (the National Oceanic and Atmospheric Administration) and is actively helping research the formation of hurricanes as well as their tendency for rapid intensification.  With over one hundred vessels in their fleet, partnerships with NASA, universities, and the U.S. Coast Guard, they hope to evolve our understanding of hurricanes and how we can adapt to their destructive nature.