43% more homes affected by Irma storm surge than might otherwise 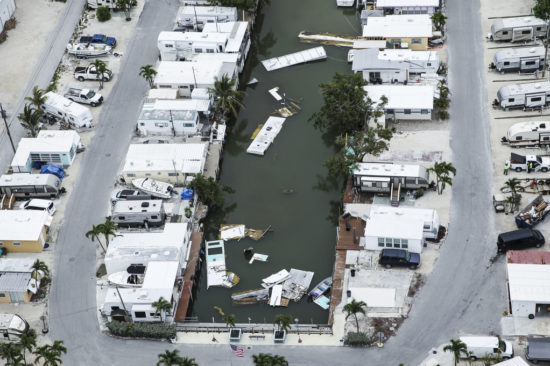 May 10, 2018 – Debris from Hurricane Irma litters this canal in Monroe County, Florida, as cleanup and recovery continues.

This current period of sea level rise we’re experiencing on Florida’s coasts is affecting the number of homes impacted by storm surge.  A new report by the First Street Foundation in collaboration with Columbia University, shows the 7 inches of sea level rise here since 1970, coupled with expanded development in what were previously wetlands, caused an additional 57,000 homes to be impacted by Hurricane Irma’s storm surge last year.

Hurricane Irma’s storm surge impacted more than 133,000 homes across Florida, causing extensive flooding and damage. The research used a geospatial analysis to model the impact of an Irma-like storm at the sea levels observed in 1970, and found that 57,000 of the properties impacted last year would not have been affected with 1970 sea levels – indicating that sea level rise was responsible for these additional impacts.

The study also found that changes in housing development patterns since the 70’s also played a role in the number of homes affected by Irma’s storm surge.  Some previous wetlands and conservation areas have since been developed for urban use.  By applying Irma’s storm surge to the housing patterns of 1970, data scientists found that only 72,000 homes would have been impacted vs. the 133,00 that were.

“Small increases in sea levels are causing disproportionate increases to the reach of storm surge.” said Dr. Jeremy Porter, a Columbia University professor who took part in the report.  “This is especially true in Florida because of the low-lying topography.”

A report last year by NOAA, in conjunction with the South Florida Water Management District estimated Florida sea levels will be up to 17 inches higher by the year 2030, in a mid-range projection.   The First Street Foundation report noted that if an Army Corps of Engineers projection of a 15-inch increase by 2050 occurs, an additional 200,000 homes would be subject to storm surge.

The group’s first report found that sea level rise was responsible for 20% of homes being affected by storm surge in Hurricane Florence.