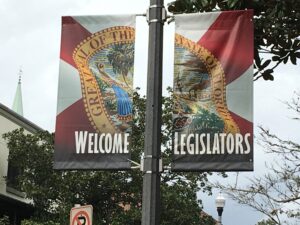 I spent this weekend, what I call the “weekend after legislative session,” reflecting on the previous few months.  With the session timeframe being 60 days from the first of March to the end of April, the real work is done in the months prior.  For the past year, since the adjournment of the 2020 session, several of us put our heads together to discuss ways to turn around the “sea of red” killing competition in Florida’s property insurance market and limiting choices for insurance consumers.

So the residential property insurance bill, SB 76 passed the legislature Friday and is on its way to the Governor for his expected signature.  It’s a watered down bill that does some things but does not restore market stability, does not fully curb rate increases, will not slow down the alarming growth of Citizens Property Insurance, nor substantially slow lawsuits.  As Senator Brandes summed-up so well on the floor of the Senate Friday afternoon, the final bill achieves no more than 40% of what was intended by the original SB 76.

I’m not a fan of the word CRISIS but every day that has passed in the last year or more saw hundreds of lawsuits filed that underscored the C word.   I listened to Senator Gary Farmer from South Florida Friday afternoon, as he debated Senate Bill 76, talk about what he calls a fabricated crisis, using the Chicken Little label for those of us who have tried to raise the awareness of the ultimate consumer harm that happens when litigation mills thrive and door to door neighborhood solicitations explode.  For some reason Senator Farmer is in denial and doesn’t want to believe Insurance Commissioner David Altmaier and great leaders like Barry Gilway, President of Citizens.  And he won’t acknowledge Commissioner Altmaier’s letter with the startling statistic that 8% of all U.S. property insurance claims originate in Florida yet 76% of all claims lawsuits nationwide are filed here.  There is just no fabricating that.

I invite you to watch Friday afternoon’s final Senate session by going to https://thefloridachannel.org/videos/4-30-21-senate-session/.  Senator Brandes’ comments begin at the timecode (bottom of the screen) of 1:35:25, followed by Senator Farmers’ comments, which begin about one minute later at timecode 1:42:14.  These two Senators have opposing views but the data supports Senator Brandes and I’m not sure what Senator Farmer uses to back-up his remarks.  Suffice to say we all worked hard to pass what SB 76 originally was – but will accept what it became.  As Senator Brandes said, “Hopefully this will stabilize rates, but it won’t reduce them.”

Senator Doug Broxson wasn’t afraid to call this an unresolved crisis, just before casting his vote.  “I’m going to vote for the bill.  But I am concerned that we continue to kick this ball down the road without making really major changes, and at some point, this body has got to understand that we’re in crisis in the state. If we don’t do that we failed the public, and we failed the least among us who can afford these increased premiums…  But this does not solve the issue and we really need to have a serious conversation about how we solve the real issue that’s occurring in the Florida marketplace today.”

I want to thank each of our readers who called and wrote me with suggestions or who took the time to write suggested bill language to change slightly what was in various versions of SB 76, but needed to be made better.  We would simply send our suggestions to key staff members and hope for the best, doing what we could to contribute.  So sit back and read through our final edition of Bill Watch this session and please know how much we appreciate you!