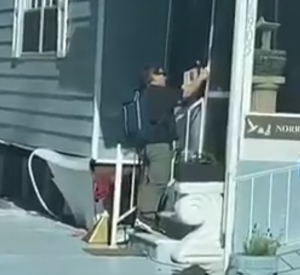 A neighborhood canvasser soliciting repair business after the tornado in the Cottage Point community of Lee County, January 17, 2022. Courtesy, WZVN-TV

Solicitors with offers to fix roofs and homes damaged in the recent tornadoes in Lee and Charlotte Counties in Southwest Florida have been out in full display in those neighborhoods. The news media in the affected area is doing a great job reporting the solicitation activities and the other irregularities in Florida’s insurance marketplace.  Plus some new data shows how AOB’s and the lawsuits they spawn aren’t going away.  It’s all in this week’s Property Insurance Digest.

Tornado Repair Solicitation: Local news media have reported on solicitors handing out pamphlets claiming they can help repair the storm’s damage and residents suspicious of their true intentions.  The Governor on Friday declared a state of emergency in the two counties from the two confirmed EF-1 and EF-2 strength tornadoes that caused widespread power outages and damage, displacing at least 300 individuals from their homes.  The Department of Financial Services deployed its Anti-Fraud Strike Team of trained insurance fraud investigators with specialized knowledge of property and casualty fraud and workers’ compensation fraud to monitor the situation. 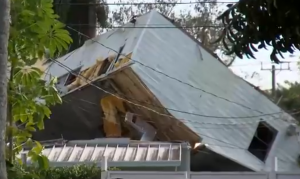 A home was flipped upside down by the tornado that hit the Cottage Point community of Lee County on January 16, 2022. Courtesy, WZVN-TV

It is Real News: The news media in Florida is increasingly catching on – and reporting on – the shenanigans and outright criminal behavior at times of those with bad intentions who ultimately are looking to make a quick buck. ABC Action News in Tampa is doing a series titled Price of Paradise.  The story points out that insurance rates will keep rising as legislators work to control lawsuits filed by roofing contractors.  It exposes the myth of the “free roof” and explains in good detail, utilizing statistics, on how that roof and other solicitation and litigation abuse is driving rate increases on all Florida property owners.  And despite passage of SB 76 into law last year, designed to curb solicitations, “In fact, we’re seeing the opposite impact, and we’re seeing more roof solicitations, door to door solicitations, than ever before. And we’re seeing a rise in related litigation,” Mark Friedlander with the Insurance Information Institute told reporter Michael Paluska for the series.

AOBs Up: The latest data from CaseGlide, among its client Florida-based companies, shows that litigated claims related to Assignment of Benefits (AOB) agreements have increased.  AOB cases as a percentage of total new litigated cases in Florida during the month of December 2021 increased to 33%, which CaseGlide said is the highest percentage registered in any month in 2021.  The litigation analytics software firm notes that the top 10 AOB contractors continue to push 30% of all AOB-related claims lawsuits in the state.  In 2021, 76,526 property insurance lawsuits were filed in Florida, an 18% increase from the 64,843 in 2020.  Claims with lawsuits cost almost five times more than those without.  According to the Florida Office of Insurance Regulation, the average non-litigated claim is $11,000 compared to $54,000 for those with lawsuits.

Until next Monday, stay safe!