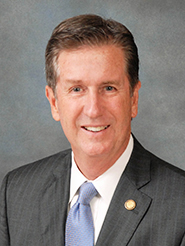 It’s week #4 of legislative committee weeks in Tallahassee, but the agenda is rather light this week on insurance issues.  The big news was last week, when the chair of the Senate Banking and Insurance Committee, Senator Jim Boyd (R-Bradenton) said he will file bills to further enhance consumer protections accomplished in this past spring’s legislative session.  Senator Boyd said he wants to allow insurance companies to offer policies covering actual cash value of older roofs, rather than full replacement value, to reduce a cost-driver contributing to double-digit rate increases.  That provision was removed from SB 76, which passed last spring and became law.  Boyd also wants to clarify the roofing solicitation language in SB 76 so that it passes court muster in current legal challenges in federal court that have resulted in a preliminary injunction on that part of the law. 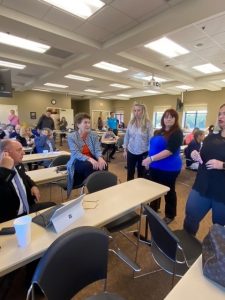 We salute Senator Boyd’s leadership in pursuing further reforms.  Insurance availability and affordability were of great concern at meetings I presented to last week at the Pensacola and the Navarre Area Board of Realtors.  These insightful Realtors are sounding the alarm that real estate closings will be in jeopardy without further consumer protections.  I explained the loopholes in the law that certain contractors and lawyers use to take advantage of homeowners.  My message to them: visit your state legislator.

During committee week #3 (October 18-22) the House Insurance & Banking Subcommittee heard from Colonel Simon Blank, Director of the Department of Financial Services (DFS) Division of Investigative & Forensic Services.  He talked about the growth of insurance fraud and his team’s efforts to fight it.  Legislators also heard from Insurance Consumer Advocate Tasha Carter about her fraud awareness and prevention initiatives and how consumers are impacted by these market shenanigans. You can view their slide presentations here, especially Carter’s sample roofing contractor solicitation on page 23.

Floridians for Lawsuit Reform last week did the math, declaring “If Hurricane Harvey occurred today, Citizens would be forced to pass on assessments of $11.6 billion to Florida taxpayers.”  That’s because Citizens Insurance, as the state-backed insurer of last resort, has been gaining an average of 5,000 new policies per week, from the growing lack of availability and affordability in the private market.  This reform organization is doing great work on behalf of consumers.  Their website and YouTube channel have examples of various solicitation practices. 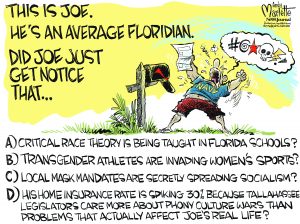 Also new from the past two weeks is the announced DFS legislative priorities for the 2022 session.  They include a new Home Hardening Initiative proposal to provide a sales tax exemption for retrofit improvements that benefits both homeowners and businesses.  Some of the items included are impact resistant doors, windows and roof securements.  Also, Senator Jeff Brandes (R-Pinellas) has filed SB 610 that extends current COVID-19 liability protections for health care providers through December 2023.  It’s vintage Jeff Brandes, keeping up with everyone and recognizing the pandemic hasn’t gone away completely, so this bill simply extends current expiration dates of protections.

There are two more committee weeks scheduled after this week (Nov. 15-19 and Nov. 29-Dec.3) leading up to the start of the formal 60-day legislative session on January 11.  Governor DeSantis has called the legislature into special session November 15 to address coronavirus vaccine mandates.