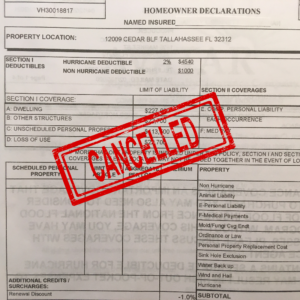 A federal judge last night issued a preliminary injunction against enforcement of part of SB 76, Florida’s new property insurance reform law that took effect July 1.  The ruling was sought by Gale Force Roofing and Restoration of Hillsborough, which filed a lawsuit in U.S. District Court for the Northern District of Florida last month, claiming SB 76 infringes on the company’s constitutional right of freedom of speech.  The suit is against Department of Business and Professional Regulation (DBPR) Secretary Julie Brown in her role of enforcing Section 1 of the law on roofing advertisement and solicitation.

In a 90-minute hearing at the federal courthouse in Tallahassee Friday morning, Chief U.S. District Court Judge Mark Walker heard the company’s argument for injunction that the law violates its free speech rights and is a “thinly veiled attempt to prevent anyone from assisting homeowners from making valid insurance claims to repair their homes.”

The DBPR, in its court filing disputed that, noting there’s a “compelling state interest” here and that “targeted digital advertisements or e-mails, door hangers, or brochures handed out in person are prohibited if, and only if, they encourage a homeowner to make a roofing-insurance claim.  Radio and television advertisements are allowed because they do not target ‘a specific person.’”

Judge Walker, in granting the injunction, wrote “this Court recognizes that the State of Florida has a valid and weighty interest in regulating contractors and protecting Floridians from fraud, exploitation, and the deleterious effects that fraud and exploitation have on the insurance market in Florida. And it is within the Legislature’s purview to address these concerns. But it must do so within the bounds set by the Constitution.  Here, the Legislature failed to do so.”

The section at issue is the one which deals with: (1) prohibited advertisements and soliciting; (2) requiring that portions of the statute section be included in contracts; and (3) provides for disciplinary proceedings for violations of the section. This ruling temporarily stops this section from being enforced.  Please keep in mind that this is only a preliminary injunction and is not yet binding law.  (You can read more about SB 76 in this special section of our final Bill Watch of the legislative session and get the “Defense Attorneys’ Take” on the new law on the latest episode of my Florida Insurance Roundup podcast, with show notes.)

The new law is designed to stem double-digit rate increases, costly claims practices, and excessive litigation – all factors driving a contraction of the private homeowners market in Florida and the resulting expansion of the taxpayer-backed Citizens Property Insurance Corporation. Citizens reports lawsuits against it rose 54% in the first four months of this year compared to the same period last year, with the insurer of last resort now adding more than 5,000 new policies weekly.

From January-April 2021, Citizens was served with 3,482 lawsuits, averaging 871 new lawsuits per month. This is a 54% increase compared to the same time period last year (avg. 567 per month).   The number of pending lawsuits grew, too, up 19% for the same period.  Pending Assignment of Benefits (AOB) lawsuits are down 16%.  Citizens attributes the overall increase in litigation to its increase in policies, which President & CEO Barry Gilway now says could reach 750,000 by year end. 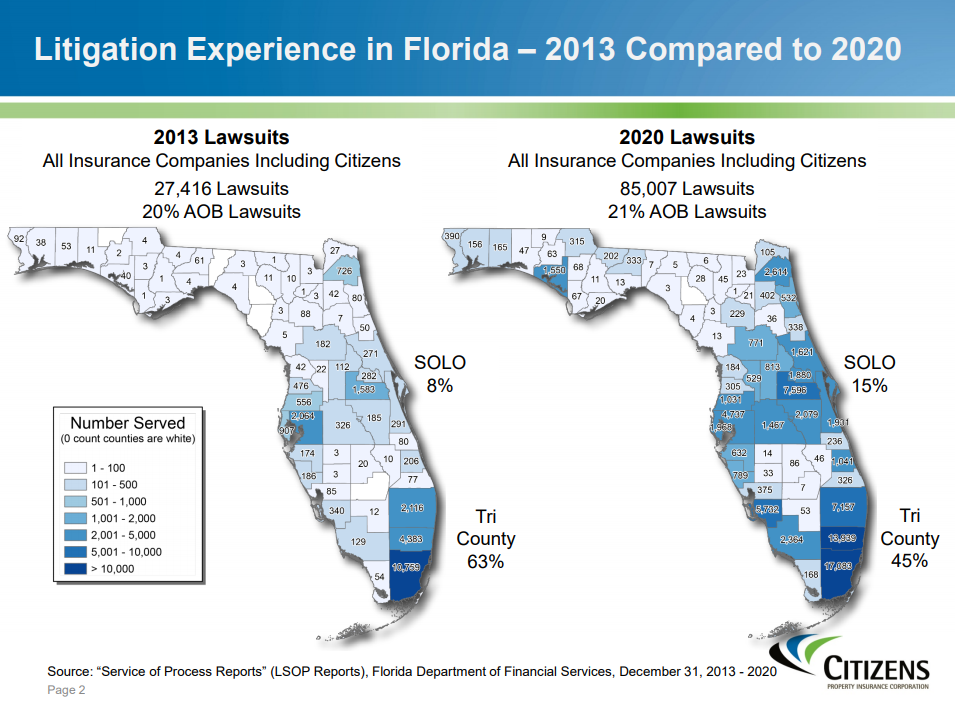 A big thank you to those in the insurance industry and related sectors, including real estate, who worked tirelessly for these needed reforms and are committed to staying the course to address ongoing challenges.   We’re proud of the role LMA played in educating the news media on Florida’s property insurance dilemma, resulting in an article in the Wall Street Journal on how rising insurance costs threaten Florida’s real estate boom, an article in Trading Risk and Inside P&C on claim trends that are crippling insurance carriers and punishing reinsurers, and my viewpoint article in the national Claims Journal citing NAIC data that Florida has 8% of all homeowners’ claims in the U.S., yet 76% of all homeowners’ claims lawsuits.  With our great partners, these articles and data were essential in successfully convincing the 2021 Legislature to change Florida’s one-way attorney fee statute and enact related reforms in SB 1598.