Many policyholders from insolvent insurance companies and from the dozen other carriers who’ve simply stopped or reduced their writing in Florida are ending up at Citizens Property Insurance Corporation, the state-created and taxpayer-backed “insurer of last resort.”  They number 5,500 per week on average.  But here’s a shocker: Citizens is losing money.  At its quarterly Board of Governor’s meeting last week, Chair Carlos Beruff said the company is losing close to $100 million a year.  It’s staying in the black only because “what we do is subsidize ourselves with the float, the interest on our investments, which is supposed to be going back to the company to grow the reserves for the catastrophic event,” said Beruff, premiering this “Financial Highlights 2009-2022” spreadsheet.

Those in the industry won’t be shocked by this news.  After all, Citizens is required by law to write homeowners and other policies to those residents who can’t find it in the private marketplace yet is prohibited by the legislature from charging actuarially-sound rates that reflect the true risk.  And if Citizens runs out of money to pay claims (as it did during the spate of 8 hurricanes during the 2004-2005 season), the rest of Florida’s policyholders across almost all insurance lines (including automobile & surplus lines) will pay a special assessment on top of their policy premium.  Because of its way under-market rates, Citizens is the cheapest insurance choice 99% of the time, per its research.

Sure, a growing policy count (now at 800,000 and projected to be over a million by year’s end) is going to increase revenue. “However if we’re not charging at least actuarially sound rates then the additional revenues are actually increasing our exposure on the back end, makes it harder and harder,” said Vice-Chair Scott Thomas.  “Until we get some legislative relief on our rates, then I think it’s going to be very difficult.  We’re stuck structurally chasing our tail and I think this really underscores what the core problem we have here,” he said.  SB 1728, the major insurance reform bill in the recent legislative session, would have helped with this growing disparity, but again, got no consideration by Florida House leadership.

“The overall financial condition of the Florida market is clearly driving the increased flow of business into Citizens,” said Citizens President & CEO Barry Gilway, sharing the chart below.

“This reflects the continuing deterioration of private company results.  It shows that the Negative Net Income for the Florida domestic market exceeded $1 billion in 2021 and the Net Underwriting Loss exceeded $1.34 billion with one company yet to report,” said Gilway, adding that the Negative Net Income has increased each of the last 5 years from $92 million in 2017 to over $1 billion last year.  But he said what’s of even more concern to him, is the financial condition of the remaining Top 10 private companies in the market, only two of which are reporting a slight positive Net Income (per the chart below). 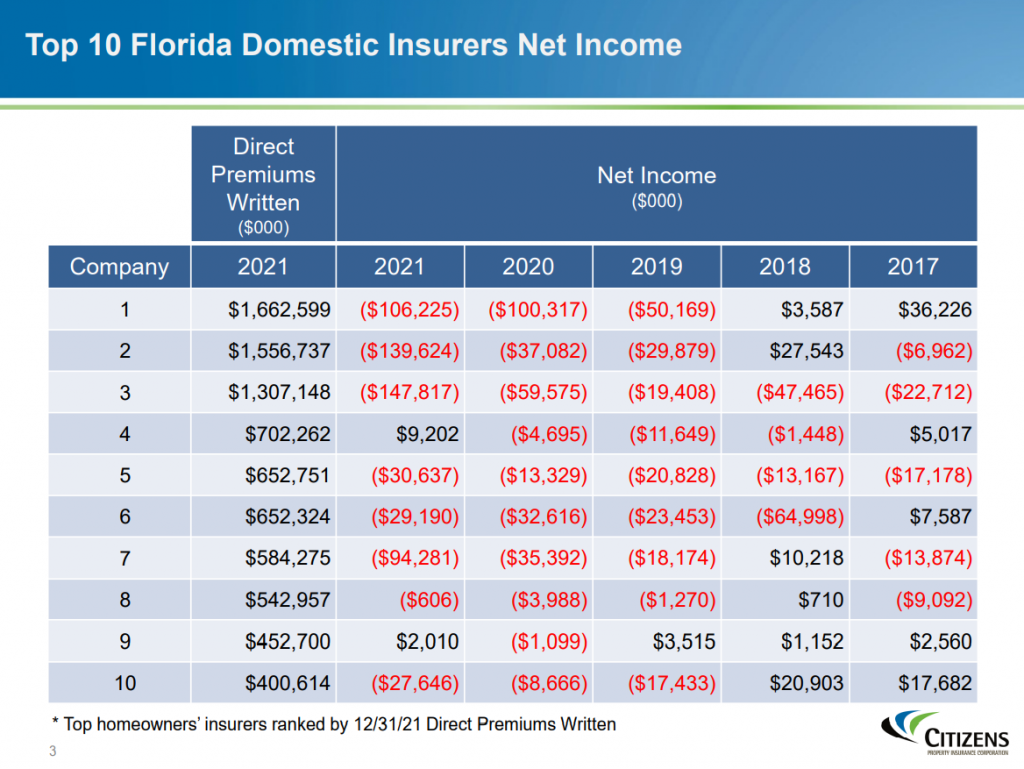 The Board also debated four different staff-provided scenarios for buying from zero to $3.4 billion of risk transfer through traditional reinsurance vs. floating pre-event bonds and relying on company surplus to pay for any catastrophic events in 2022 (per our past newsletter) to prevent unnecessary spending.  Gilway remarked “Over time, the model doesn’t work because if you have multiple storms the way we did in 2004-2005, then you run into a scenario where you’re eliminating surplus and you’re paying your cost directly out of – and the only way to recoup the costs that you’re paying is using – assessments.”  Several Board members expressed they have no problem charging potential future assessments to Citizens policyholders who would end up paying a lot less in assessments than they would have paid in a private & actuarially-sound policy rate.  The Board will make a decision on risk transfer at a May meeting.

This newsletter and our firm have been steadfast in support of Barry Gilway’s unwavering common sense approach to the Florida insurance market’s ills.  He is resilient like few we have seen and leads the pack when it comes to workable ideas on good consumer protection and public policy.  The Governor and legislative leadership would do well to heed Gilway’s warning.