The Florida Office of Insurance Regulation (OIR) last week held a rate hearing for the state-backed Citizens Property Insurance Corporation to consider the carrier’s requested rate increase, which includes a proposal to eliminate the statutorily-mandated 10% “glide-path” rate hike cap on new customers.  Citizens seeks an overall statewide rate hike of 7.3% (an HO-3 multiperil average of 6.1%) with the largest individual policy rate increase to be capped at 10%.

During the more than three-hour hearing, Citizens actuaries noted there were no rate decrease indications anywhere in their filing, due to the discrepancy between uncapped rates (with an overall indication of a 29% increase) and capped rates (with an overall indication of a 7.3% increase).  Citizens is proposing to eliminate the 10% cap on new customers, with the exception of Monroe County (the Florida Keys) which would have a 20% rate increase cap on new customers because of the lack of a competitive insurance market there.  If approved by regulators, the cap proposal would increase rates for new customers by an average of 21%. 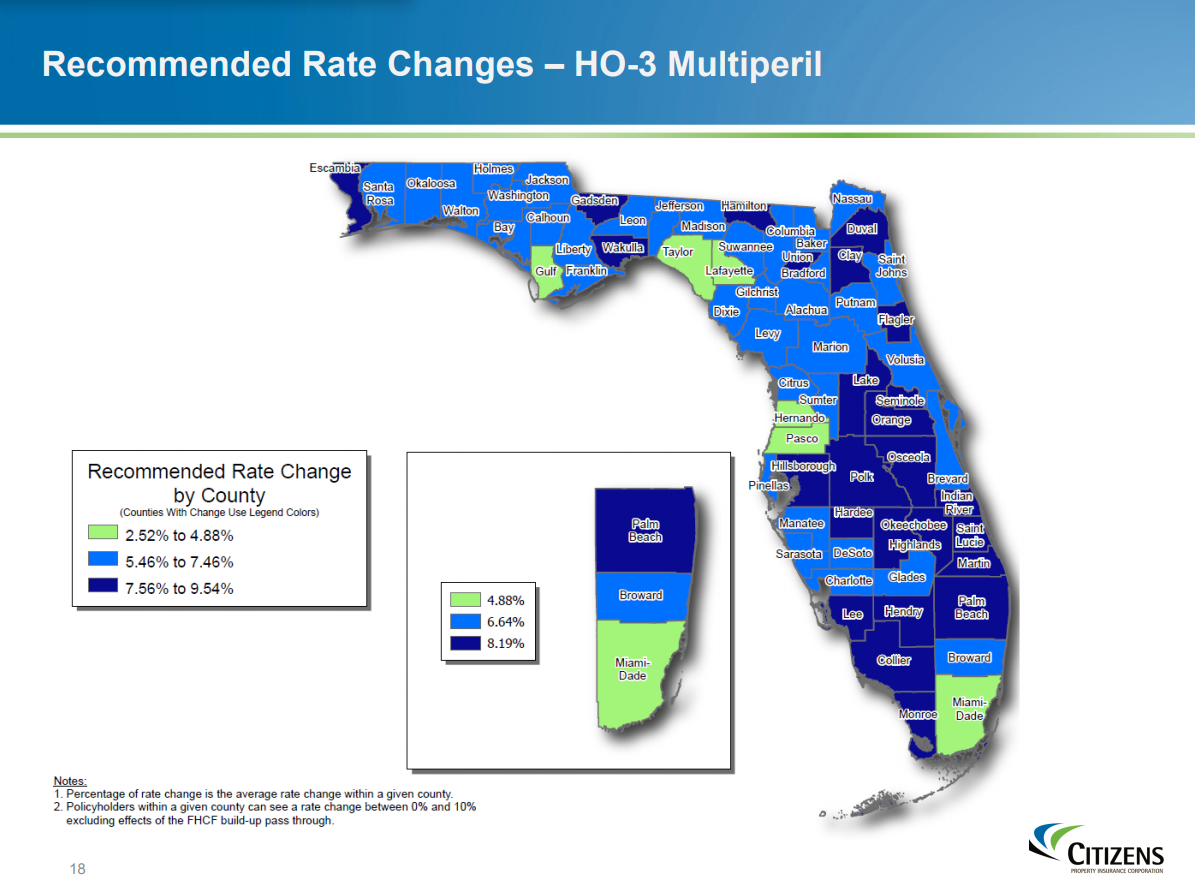 Citizens is seeking the change due to that very rate discrepancy, which is driving more and more business into the state’s so-called “insurer of last resort” making it increasingly the “insurer of first-resort.”  In the past year, Citizens’ policy count has grown by more than 100,000 (from 443,444 to 551,613 by February 28, 2021, an increase of 26.4%).  Citizens is now receiving more than 3,000 new customers per week and expects to add a total of nearly 150,000 policies this year.

“The reality is, the marketplace in Florida is shutting down,” Citizens President Barry Gilway told Insurance Commissioner David Altmaier, who personally presided over the hearing.  Gilway noted that some insurance companies are no longer writing or renewing policies in some areas and placing greater coverage restrictions on other policies.

OIR actuaries questioned the basis for revising the 10% cap to apply only to renewing customers going forward.  Belinda Miller, a former OIR general counsel who is now interim general counsel for Citizens, said the Florida statute capping annual increases can be interpreted as only applying to existing Citizens customers.  The legislature this session is also seeking remedies for Citizens’ policy growth, including a measure that would eliminate the 10% annual rate hike cap for new customers after July 1 as well as owners of non-homesteaded property, such as second homes (see Bill Watch in this edition).

Our firm and those associated with us stand beside Barry Gilway.  To say that Mr. Gilway is an industry leader is an understatement.  His commitment to all Floridians is to be admired.

OIR will take written comments from the public through March 26 and make a decision on the rate request sometime this spring.  You can view Citizens rate hearing presentation slides and watch a recording of the hearing here.   We also offered some additional background going into this hearing in our last newsletter.