Talk of sharing the secret sauce

About the time you open this week’s newsletter, the Citizens Property Insurance Corporation rate hearing will begin.  Of note in the rate filing details is a proposal by Senator Jeff Brandes and approved by the Citizens Board to allow the “insurer of last resort” to charge the “right” rate for new customers in an effort to stop the carrier’s growth trend.  In the past two weeks, based on testimony from its President Barry Gilway, Citizens will have grown by about 9,000 policies under its currently taxpayer-subsidized capped rates, an alarming trend to those who remember a decade ago when Citizens wrote about 15% to 20% of all property insurance in our state.

As a reminder to our readers, the term “Citizens growth” is, simply put, a bad thing.  When Citizens grows, so does every Floridians’ risk of paying for that growth through state-mandated assessments, should there be a catastrophe (a single big hurricane or smaller multiple hurricanes).  So remember, a healthy and competitive insurance market means Citizens shrinks!  When Citizens offers cheaper rates than most of the rest of the private market (under the legislatively-created 10% annual “glide path” cap on rate increases) rather than actuarially sound rates, policies flock to Citizens.

If approved by regulators, the Brandes recommendation would increase rates for new business by an average of 21%.  A November 2020 report by the FSU Florida Catastrophic Storm Risk Management Center supports the need to reduce Citizens exposure by changing the 10% cap.  Otherwise, Citizens is pursuing rate increases of an average of 6.2% for homeowners HO3 policies and an average of 9.5% for condominium and mobile home coverages.   The proposed increases for all accounts is in the chart below. 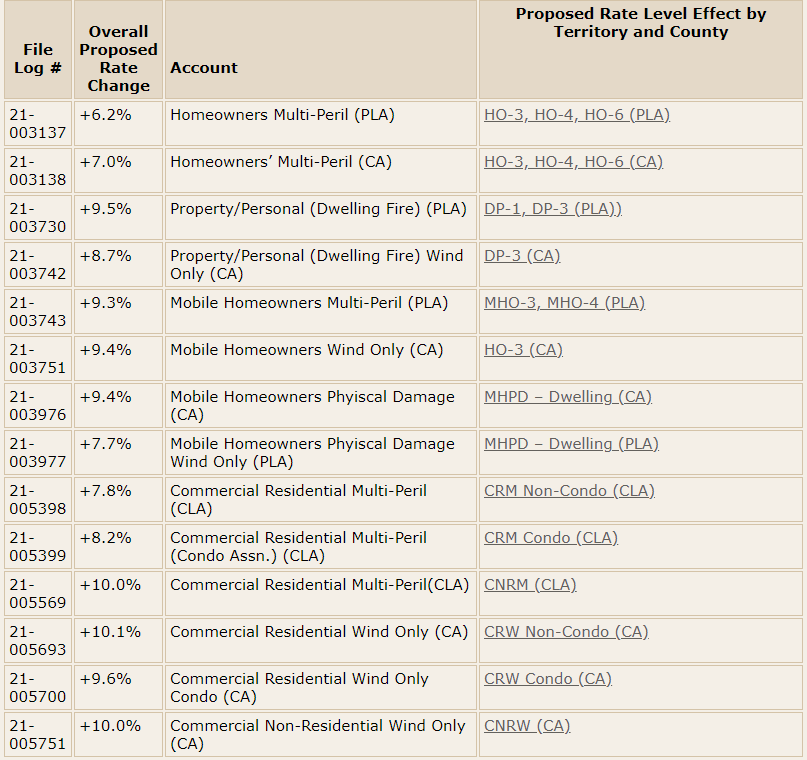 The effective date of the proposed rate changes is August 1, 2021. Source: Florida Office of Insurance Regulation

Citizens reports it’s experiencing the same effects of the financially troubled private insurance market and continues to rely on investment income to offset operating losses as it prepares to accept an anticipated nearly 150,000 added policyholders by the end of this year.  Today’s rate hearing will be held virtually and begins at 9 am.

Secret Sauce: One of the tools Citizens is using to ensure customer satisfaction and a reduction in litigated/disputed claims is to allow policyholders the ability to be in its Managed Repair Program (MRP), made up of Water Mitigation Services and Permanent Repair Services.  Citizens’ litigation decreased by 20% in 2020 compared to the year prior vs. other carriers increasing by less than 1%.  The MRP customer satisfaction rate is rising and there was discussion at its recent Claims Committee meeting of Citizens freely sharing this propriety program with other insurance companies in Florida.  The knowledge and techniques Citizens has employed can help other carriers bring down litigation costs.

Barry Gilway noted “When we do have a MRP claim, we literally have no litigation following.  When you think about it, that’s staggering.  When implemented effectively, it can have a direct impact on litigation and that’s why I truly believe we’re showing so much improvement relative to the rest of the industry.  And we do have some unique elements to our program, such as the free water mitigation program.  No one else I’m aware of, has that.  It’s a compelling program when you explain it to a policyholder and use it effectively.”

Barry Gilway is resilient like few we have seen and leads the pack when it comes to workable ideas on good consumer protection and public policy.