The FEMA road show has begun in South Florida.  The agency is holding open houses from West Palm Beach south through the Florida Keys to reveal proposed new Flood Insurance Rate Maps to replace the existing ones – some of which were based on data that FEMA says is now 40 years old.   The maps are expected to be approved just in time for the premier of FEMA’s Risk Rating 2.0 in 2021– featuring more realistic, market-based rates.

The proposed maps cover coastal areas of South Florida, utilizing newer technologies and better ground elevations, and re-draw the lines for what’s considered high-risk properties.  FEMA warns that thousands of properties will be affected.  Some residents currently mapped in lower risk areas may now be in high-risk areas on the new maps; conversely, some residents now in high-risk zones – some paying higher rates – may find themselves in lower risk areas, able to enjoy lower rates.  The Risk Rating 2.0 program, now scheduled to take effect in October of 2021, promises more actuarially-based rates and premieres right around the time South Florida’s maps should be finalized.  There are predictions that rates could go up 20% to 30% on some properties. 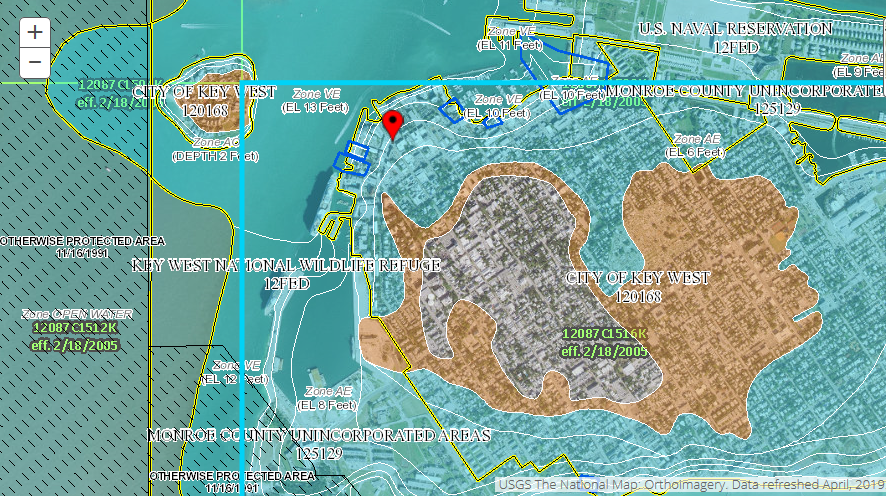 Published reports say FEMA’s recent open house in Key West drew about 500 attendees compared to an audience of about 65 in Palm Beach County.  The new maps are preliminary and allow residents to ask questions and provides the opportunity for local governments to challenge the changing flood zones, before they become final.   FEMA is also using these events to urge residents to buy flood insurance, for 54% of Florida homes in high risk flood zones do not have flood insurance (nationally, it’s 69%).  Another selling point: those who buy now get grandfathered in from the higher prices that will go into effect with new maps once implemented.

The FEMA public communications effort includes urging residents to use the FEMA Flood Map Service Center web portal to look up their own address and see what flood zone they’re in.  FEMA’s on the ground Florida team even handed out this handy flyer with easy step by step instructions on how to compare the current and proposed flood maps.

FEMA notes this other interesting selling point on the web portal: “If you live in an area with low or moderate flood risk, you are 5 times more likely to experience flood than a fire in your home over the next 30 years. For many, a National Flood Insurance Program’s flood insurance policy could cost less than $400 per year.”   We would add that all residents should also comparison shop, looking at private flood insurance alternatives that can be less expensive and provide greater coverage than federal flood policies.