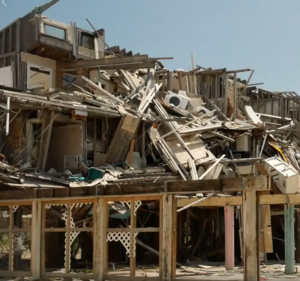 2020 was a record year of hurricanes, with 12 named Atlantic storms making landfall, resulting in upwards of $65 billion in economic damage.  Now AIR Worldwide is out with a new report modeling what we can expect would happen if increased storm frequency and sea level rise continue in the long-term future, as some predict.

The report, Quantifying the Impact from Climate Change on U.S. Hurricane Risk looks at how climate change may affect hurricane risk in the U.S. by the year 2050.  It was published in collaboration with experts from the Brookings Institution and AXIS Capital Holdings Limited and looks specifically at financial losses to residential and commercial properties.  Co-author Dr. Roger Grenier is a familiar read and voice to our readers, including appearing on my Florida Insurance Roundup podcast “Flood Follies” a couple of years back.

The report explores future hurricane-generated storm surge losses for selected study areas around New York, Houston, and Miami, as indicators of the additional risk created by rising sea levels.  The analysis shows that increased event frequency and sea level rise will have a meaningful impact on future damage.  The growth in the number of stronger storms, and landfalling storms overall, increases modeled losses by approximately 20%, with slightly larger changes in areas such as the Gulf and Southeast coasts where major landfalls are already more likely today.  The loss increases extend to inland areas as well, as stronger storms may penetrate farther from the coast.

The impacts from sea level rise, using the analysis of storm surge for New York, Miami, and Houston suggests that by 2050, sea level rise may increase storm surge losses by anywhere from one-third to a factor of almost two, with larger impacts possible when combined with increases in the number of major storms.  The actual losses in 2050 could be higher.  While the analysis holds property exposure constant at today’s levels, coastal exposure is currently growing at a 4% annual rate and is likely to continue growing.

“This analysis points to increased damage and losses from hurricanes without factoring in any changes to the concentration of property exposure along the coast,” said Dr. Peter Sousounis, vice president and director of climate change research, AIR Worldwide, in a release.  “With more intense hurricanes making landfall, and storm surges from more strong storms on top of a higher sea level, the results presented in this study are only the first step.  Additional research into a wider range of impacts is necessary to complete what is surely a more complex picture, particularly related to how risk may change geographically.”