OIR leadership is hope for consumers 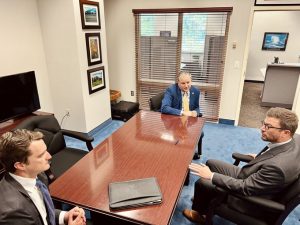 There are generally three ways to create or change public policy: legislate, regulate, or adjudicate.  What Florida lawmakers failed to legislate this past session in property insurance, the Florida Office of Insurance Regulation (OIR) is now accomplishing to some degree by regulation in encouraging ways.  It caps a series of behind-the-scenes meetings that Insurance Commissioner David Altmaier said he’s been having over recent weeks, culminating in a March 30 meeting with CFO Jimmy Patronis, referenced in this picture at left posted to social media.

We applaud the CFO and Commissioner’s engagement to move in the direction of more consumer protections and willingness to be open to innovative ideas for policy forms and products, as well as rating platforms that provide consumer choices.  This is similar to what regulators in West Virginia and North Carolina have done in considering out-of-the-box ideas in the “regulatory sandbox.”  OIR’s moves fall into five critical areas.

OIR Allowing Roofing Deductibles: To counter the “free roof” offers by some unscrupulous contractors, Commissioner Altmaier has announced new steps to address roof-damage claims that have exploded in frequency and cost.  He’s going to allow insurance companies to offer roof deductibles along with a roof surfaces payment schedule endorsement based on the roof’s life.  This is similar to last session’s SB 1728 which passed the Senate but died in the House.  What differs is OIR giving the consumer the choice to accept or reject the endorsement.  Some agents say the effect of this will be negligible because they do not believe consumers will opt-in to buy the coverage.  We will watch as this unfolds to determine what is commonly called “the takeup rate” of this new coverage should it become prevalent in the market.

FBC Considering Exception to the 25% Roof Repair/Replacement Rule: The Florida Building Commission (FBC) is considering a proposed exception to the 25% repair/replacement rule that would take into account the age of the roof material.  Current code requires that most roofs be replaced when 25% or more of the surface is damaged.  This idea, pushed by the Florida Roofing and Sheetmetal Contractors Association, would help keep otherwise perfectly good roofs in place and avoid expensive replacement costs often born by insurance companies.  Other proposed changes include allowing the first layer of shingles to remain in place if undamaged and updating South Florida’s roof code to conform to the rest of the state.  These developments were first reported in the Insurance Journal.

OIR Eases Material “Matching” Requirements: The lawsuit by Olympus Insurance against OIR that we reported in the last newsletter has been resolved, with the carrier dropping its suit without comment.  It had sought reasonable limitations in its repair and replacement of damaged items to meet the state’s “matching” requirement.  The day after the suit was dropped, OIR approved the company’s form filing, which we understand remained largely intact.  You can read the lawsuit, which includes the form in question.  Look for more carriers now to file similar forms.

OIR Approving Mandatory Arbitration:  OIR is now allowing policy endorsements requiring most homeowners insurance claims disputes go to mediation, then arbitration.  It approved a filing last month from American Integrity Insurance with an endorsement that governs not only the policyholder but any third-parties to the claim, including Assignment of Benefits (AOB).  This will help address the rising frequency and cost of litigation insurance companies face, as arbitration is a faster and less expensive process, while still protecting a consumer’s right to sue in certain circumstances.  Look for more carriers now to file similar endorsements with OIR.

Commissioner Altmaier told the Governor and Cabinet in their recent meeting that the property insurance market is in a “critical couple of months” as carriers purchase reinsurance to protect them from excessive payouts in the upcoming hurricane season that begins June 1.  Like excessive roof claims, reinsurance has become increasingly expensive for Florida carriers.  “Reinsurance companies don’t mind paying claims. They do mind paying claims that are three times as much as they thought that they were going to be,” Altmaier said.  “That makes Florida not an attractive place for them to deploy their capital and that’s a bad outcome for consumers as well.”