One agent’s push for consumer education

As we count down to the next short-term expiration of the National Flood Insurance Program (NFIP) on December 20, two regulatory groups are moving ahead this month with efforts to encourage development of a private flood insurance market in all 50 states.  Plus, how some insurance agents and one local government hit hard by Hurricane Michael have stepped up to the plate to educate and protect consumers.

The National Association of Insurance Commissioners (NAIC) begins its fall meeting this Friday in Austin, Texas.  The Catastrophe Insurance Working Group is going to receive updates on two key works in progress: the NAIC State Disaster Response Plan (2003) and the “Actions for State Regulators in Building the Private Flood Insurance Market”.  The latter was put together last spring, then opened for comments this past summer, which you can read.  The actual draft private flood bill begins on page 136.

The NAIC Casualty Actuarial and Statistical Task Force is expected to continue its deliberations on the draft Regulatory Review of Predictive Models White Paper regarding the regulatory review of predictive modeling used in rate filings.

Co-located at the NAIC meeting will be the National Council of Insurance Legislators (NCOIL) which itself, has a Private Flood Insurance Model Act in development.  As we’ve been reporting here, the latest contended issue has been on the role insurance agents should play in educating policyholders on pricing of NFIP and private policies.  A compromise draft will get its first reading.  It requires “producers” notify applicants that flood polices – public and private – exist.  We’ve been pushing for an active role for agents, going beyond that to include pricing differences, given the large number of Americans who don’t know they live in flood hazard areas.  We applaud NCOIL on this compromise and look forward to the discussion on December 11. 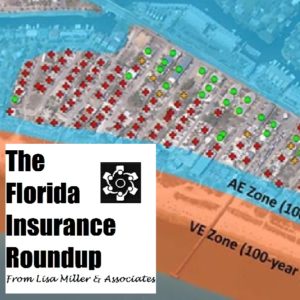 The role some vigilant agents are playing in that consumer education was the topic of our latest episode of The Florida Insurance Roundup podcast.  Trey Hutt, owner of Hutt Insurance Agency in Panama City, said his staff for many years has aggressively offered flood policies with homeowners policies (which don’t cover most flood damage).  Those customers who choose not to purchase it have to sign a form acknowledging that.  “A flood rejection form has become a part of a lot of agencies’ tool kits,” he noted on the podcast.  Hutt said it should be mandatory for insurance agents to “make the call” and offer customers flood insurance.  We also get an engineering update on Mexico Beach’s tougher post-Michael building ordinance.

Also of note, a recent Claims Journal article reports that FEMA’s National Advisory Council is urging the NFIP parent agency to adopt blockchain technology and parametric insurance in its flood claims process.  The article includes my remarks that the entire insurance industry is moving from yellow pads to artificial intelligence.  The parametric insurance concept and all of this new technology, especially for security purposes, is where it’s at.

As it has with incorporating predictive modeling in its upcoming Risk Rating 2.0, we commend FEMA for embracing new technical solutions to decades-old challenges.