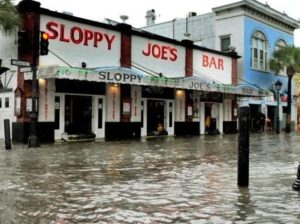 The Florida Keys are no stranger to the high flooding and winds that catastrophic hurricanes can bring – 2017’s Hurricane Irma is the latest reminder.  Comprising the southern tip of Florida at the crossroads of the Atlantic Ocean and Gulf of Mexico, the chain of barrier islands is the most exposed point on the peninsula.   Now the Army Corps of Engineers (the Corps) has a new plan to protect the Keys, but it’s not so much what the Corps recommends as what it isn’t recommending that makes it interesting.

The Corps recently presented a $3 billion plan to Monroe County officials that would use the bulk of the money to buy-out homeowners and elevate and otherwise flood-proof major buildings and infrastructure.   The only new physical flood barriers would be rocks alongside U.S. 1, the main coastal highway, at six strategic locations to help prevent overwash in storms.

Our newsletter two weeks ago mentioned the Corps proposal to build a 10-13 foot wall along the coast in parts of Miami-Dade County as part of its flood mitigation solution there.  There would be no sea walls for the Keys; instead, the focus would be on floodproofing critical infrastructure such as hospitals, and public works facilities.  The rest of the plan would be voluntary buyouts of homes and businesses for demolition in strategic groups, to allow water to once again naturally flood and recede.

The state’s existing Rebuild Florida voluntary home buyout program for Irma-impacted communities has about $20 million going to the Keys, in a partnership with HUD.  About 60 homes under a previous plan are already slated to be purchased and demolished.  The Army Corps says it doesn’t yet know how many homes and businesses would be part of its buyout or elevation plan.

The Corps will publish its formal proposal this summer and then take public comment for several months.  A final plan isn’t expected until the fall of 2021.

Speaking of flooding, I had the opportunity to sit down as a guest on a recent episode of the Floodtalks podcast.  We discussed the proposed Private Flood Insurance Model Act that is under consideration by the National Council of Insurance Legislators, which meets again this week.  A key component that I’m fighting to keep, is the agent education of the consumer.  We need agents to explain the benefits of purchasing flood insurance and provide details on the pros and cons of a federal flood policy vs. a private market policy.  Only then, can our homeowners and businesses fully realize the risk and costs involved and actively participate in providing their own protection.