Under the assumption that it cannot control severe weather, nor deny recovery money to communities struck by future catastrophes, the federal government is developing a framework for how best to invest its finite taxpayer resources into more efficient and effective resiliency efforts across the country.

The U.S. Government Accountability Office (GAO) has released its Disaster Resilience Framework: Principles for Analyzing Federal Efforts to Facilitate and Promote Resilience to Natural Disasters.  It’s an analysis of suggested actions to maximize opportunities to build resilience to disasters into our future buildings and communities.

Since 1980, 254 weather disasters in the U.S. have caused more than $1.6 trillion in damage.  The federal government has spent more than $450 billion in disaster assistance to communities.  The assumption is that those events are going to increase in frequency and severity, making this report a wise research investment. 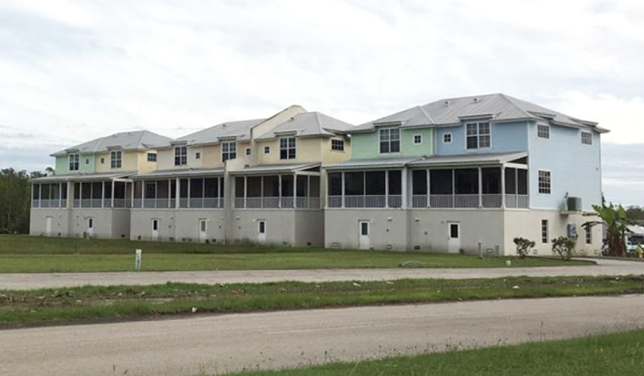 Elevated homes with tin roofs in Florida to protect them from wind damage. Courtesy, GAO

While its audience is federal agencies, GAO says the report’s principles are applicable to state and local governments, and even the private sector.

“Our infrastructure is getting more expensive to fix and is clustering near water and the coast,” said Chris Currie, a homeland security and justice director at GAO.  “It’s critical that we start planning now to take action to incorporate disaster resilience into our policies so we can avoid bigger losses down the road.”

The report is organized around three broad overlapping principles:

The report then offers a series of questions that those who provide oversight or management of federal efforts can consider when analyzing opportunities to enhance their contribution to national disaster resilience.

The costs in preparing, responding, and recovery in natural disasters is going up in both the public and private sectors.  Rather than an after the fact audit report, this GAO framework is meant to provide a proactive guide for future policy and funding decisions that impact us all.