There are now four bills before the Florida Legislature this session targeting to various degrees the abusive practices of third-party contractors and lawyers using Assignment of Benefits (AOB) to force insurance companies to pay greater claims than often justified, which is driving up property insurance rates.  The leading bill out of the gate is HB 1421 sponsored by Representative James Grant (R-Tampa) that would also protect consumers from such abusive practices.

The bill allows AOBs to exist on residential policies but prohibits an AOB from altering policies requiring managed repair.  It also requires a 21-day notice to the insurer prior to filing suit and allows the prevailing party to be reimbursed for attorney fees.

The bill would also protect policyholders by requiring a written and itemized work estimate and allowing them to rescind an AOB within seven days.  It would also prevent a contractor from balance billing the policyholder for certain costs after the insurance company pays the claim.  Contractors would have to notify the insurer upon signing an AOB.   It also requires that AOBs contain written notices warning homeowners that by signing one, they are giving up certain rights that may result in a lawsuit against their insurer.

Unlike its Senate counterpart, it attempts to move Florida’s one-way attorney fees for assignees to a “loser pay” system or as some would say, a two-way attorney fee provision.  The senate bill on AOB, SB 1038 sponsored by Senator Dorothy Hukill (R-Port Orange) and Kathleen Passidomo (R-Naples), focuses more on tightening the reins on one-way attorney fees.  The one-way attorney fees statute allows policyholders to recover legal costs if the insurer has been shown in court to have underpaid the claim in any amount.  The bill, crafted by the Florida Office of Insurance Regulation (OIR) clarifies current law by adding that attorney fees would not be awarded “in favor of any person or entity seeking relief against the insurer pursuant to an assignment agreement.”  In other words, only the named policyholder would be entitled to file suit.  Simple, yes?

In practice, likely no, given the sway the trial bar has in Florida, including those members sitting in the Florida Legislature.   The Florida Justice Reform Institute, a Florida Chamber of Commerce partner group, predicts attorneys will circumvent the bill’s provisions by convincing policyholders to file suit in their own name.  And unfortunately, Sen. Hukill is out the rest of session on medical leave.

The trick to what OIR proposed is to let the consumer keep all current protections (satisfying the legislature’s ongoing concerns over the past three sessions) but focus more specifically on the culprits: abusive lawyers and third-party contractors, some of whom aren’t even properly licensed, who inflate claims and fees.  The idea being that attorneys will think twice about taking on such cases in the future, knowing there’s no guarantee their fees will be paid.  This bill keeps the consumer “at the table” and involved in the insurance transaction in contrast to current AOBs today.

Other potential solutions raised beyond these bills include requiring all mitigation contractors be licensed and making illegal aiding in solicitation of legal services for mitigation cases.

The impact here goes beyond the rate increases on Florida homeowners (OIR’s approval rate for residential rate request increases went from 38% in 2014 to 72% in 2016 – as you can see in the chart).  Some insurers are curtailing their policies in high-abuse areas of the state (Tri-County South Florida), restricting their policy coverage through form changes, and accepting fewer Citizens take-out offers from the very areas of the state that are most high-risk of storm damage.  AOB has become a true legal tsunami atop what may be a very busy upcoming hurricane season in Florida and is counter-productive to returning the state-run Citizens Property Insurance Corporation to a true insurer of last resort. 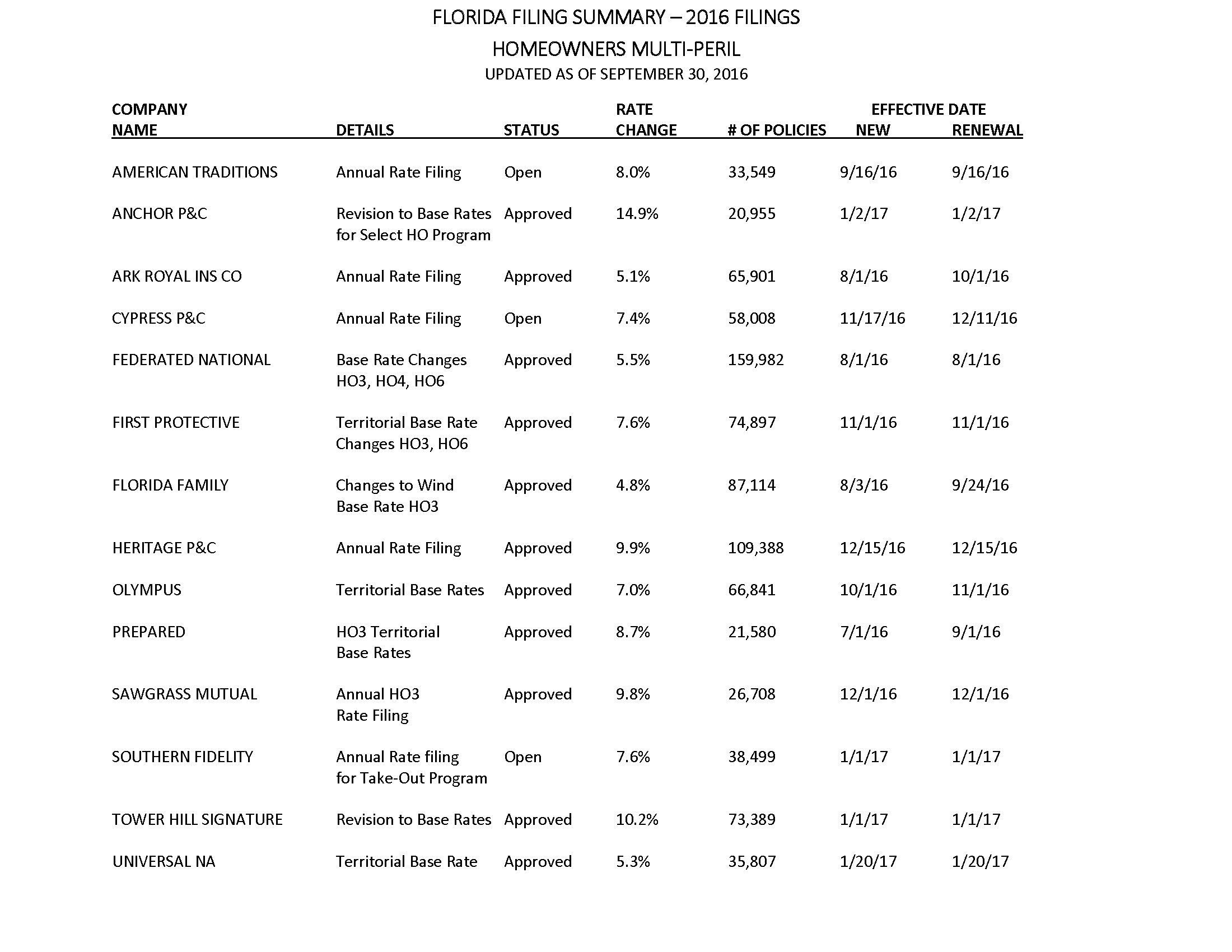 Citizens itself has instead become the legal target of first resort, with a whopping 45% of its claims going into litigation last year – up from 12% in 2011.  Citizens did a study showing that when a claim comes in with an AOB document attached to it, the claim costs three-times more than one that doesn’t.  All Citizens policyholders are suffering with higher rates as a result of this AOB abuse.

Private insurers and their policyholders are suffering as well.  Recently, the head of Florida-based HCI Group said the company’s lawsuit rate is now 35%, but that the AOB problem is limited to just two of the state’s 67 counties and in only one of its five insurance lines.  He added that the claims rate is now declining because of compensating actions by the company.  Indeed, it may be left to the private sector to try to resolve what the public sector cannot – or will not.