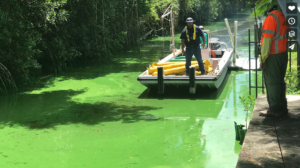 A typical blue-green algae bloom on a Florida waterway

With the rising summer temperatures come rising blue-green algae levels in some prominent Florida lakes and waterways.  There are now reports of people getting sick from the cyanobacteria that can be present in the algae and a dog dying from it, as state and local governments are working with private industry on innovative ways to reduce the problem.

Florida’s Blue-Green Algae Task Force met last week in West Palm Beach and heard from residents who say they were sickened by drinking tap water containing unhealthy levels of cyanobacteria.  Up until this point, the Task Force has focused over the past two years on how to prevent ugly smelly algae blooms choking estuaries leading to both coasts from Lake Okeechobee discharges.  Technologies have been developed to begin dealing with those issues, but they’re now facing a public health problem. 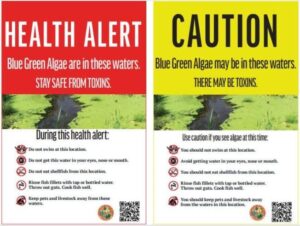 West Palm Beach water officials had issued a health alert for residents May 28-June 4, due to harmful levels of cylindrospermopsin toxins in the drinking water for vulnerable populations.  High enough levels can create cyanobacterial blooms.  The Palm Beach Post reports that a dog died last month after exposure to blue-green algae toxins in waters from a West Palm Beach canal fed by “Lake O.”  The dog was found to have fatal levels of cyanobacteria in its vomit.

The challenge is that the technology currently being used to deal with the smelly algae blooms treats algae that floats on or near the water surface.  Cylindrospermopsin toxins are often found in the middle layers of a body of water and may be harder to reach and treat.

AECOM has been a leader in Florida’s successful cleanup efforts to reduce and eliminate algae blooms in its waterways.  The engineering firm was in Tallahassee on June 17 to demonstrate its new algae harvesting technology on Lake Munson that over the next eight months will filter the algae-choked water and create clean water for discharge downstream to pristine Wakulla Springs.  The resulting green sludge is stored and turned into fertilizer and other commercial products.  The blooms are fueled by pollution from nutrients, including excess fertilizer and leaking septic tanks. 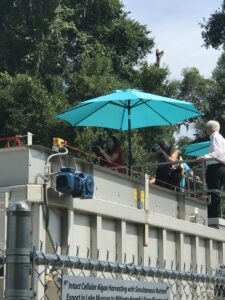 AECOM has also been working with the University of Florida on how best to target the other things in the water that can also impact health – including cyanobacteria.  Dan Levy, AECOM’s vice president and global director of its algae program, explained to Lake Munson residents in this video the balanced approach involved in taking the right things out of the water and leaving the rest, guided by evolving science.  He also noted that “we’re seeing harmful algal blooms almost every year and they’re becoming more toxic.”

The Florida Department of Environmental Protection (DEP) just issued a call to action to eligible entities to submit proposals for water-related grant programs.  The three grant categories are wastewater, innovative technology, and targeted water quality improvement.  You can learn more and apply on DEP’s ProtectingFloridaTogether.gov website.  The submission deadline is July 15th, 2021.

Also, the $1.2 trillion federal infrastructure plan worked out between President Biden and a bipartisan group of Senators includes $55 billion for waster infrastructure, $21 for environmental remediation, and $47 billion for resilience.