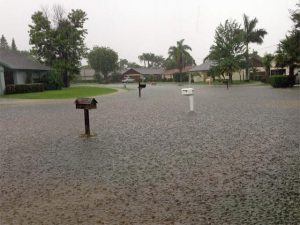 Over the past couple of weeks, we have seen numerous media reports about flood insurance, including  last week’s four-month reauthorization of the National Flood Insurance Program (NFIP) and new trends showing that Americans are moving in the right direction by moving away from NFIP into private insurance coverage markets.  The flood insurance buzz is alive and well and here’s a quick snapshot of what the buzz has been all about.

The omnibus government funding bill passed by Congress and signed by President Trump last week contained an interim reauthorization of the NFIP through July 31.  The idea of not tying it to a full year funding of the federal government will provide Congress another opportunity to consider enacting meaningful reforms to a program that the Congressional Budget Office last week estimated is losing $1.4 billion annually.  The U.S. House last November passed the 21st Century Flood Reform Act, but the Senate has failed to act on it, out of concern by powerful coastal state Senators on the impact of the bill’s efforts to encourage a vibrant private flood market.  More here from the Washington Examiner.

Despite congressional inaction, the U.S. private flood market is growing, up 51% last year, with more competition leading to lower premiums.  Florida is leading the way, under a framework of bills championed over the past few years by state Senator Jeff Brandes (R-Pinellas County).  Florida surpassed California last year to become the largest private flood insurance market in the country.  NAIC data shows Florida private coverage grew from $47.8 million in 2016 to $84.5 million in 2017.  That’s still a drop in the bucket compared to the NFIP’s $962 million in Florida premiums as of January.  More here in this excellent article from the Insurance Journal.

Meanwhile, the Trump Administration is not waiting for Congress, pushing changes on its own, where it can.  FEMA finally loosened its grip and is now allowing WYOs (Write Your Own) insurance companies (those insurance companies that serve as claims and policy administrators for NFIP) to sell private insurance, eliminating a longstanding “non-compete” provision.  Details are outlined in this Federal Register notice.  FEMA also plans to reduce compensation for WYOs from 30.9% to 30%.  The bills before Congress would reduce the rate even more.

The NFIP has also been busy, announcing bi-annual program changes impacting its 5.2 million policyholders (1.8 million of them here in Florida).  Premiums are increasing 8% for Preferred Risk Policies.  Those properties newly mapped into special flood hazard areas will see premium increases of 15%.  Various surcharges and deductible factors remain unchanged.  For those “inquiring minds who want to know”, there’s more in this PropertyCasualty360 article.

Like the water, the stakes are high in all of this flood coverage news.  A new study in the journal Environmental Research Letters says the number of U.S. households exposed to serious flood risk could be triple the previous estimates.  The study says nearly 41 million Americans can be at risk of floodwaters, compared to the 13 million captured in high risk zones on FEMA flood maps.  Population growth and increased freshwater flooding just aren’t well reflected overall on FEMA’s maps, which vary in age and quality.  The study’s higher risk estimates are based on high-resolution hazard, population, asset and projected development maps of the entire U.S.  The Atlantic hurricane season starts in just ten weeks.  Are you (and your personnel) prepared?