Many of you have watched the Florida Legislature for years. I don’t want you to walk away from this blog thinking that all is lost.  We live in a democratic republic and it’s the best one in the world, like it or not.  I’m 57 years old and I started in the legislative process when I was 18.  And I’ve been in and out of it for 40 years.  When we started the 60-day session on March 7th, you don’t get all your work done in that time, it involves working in the interim – between sessions. 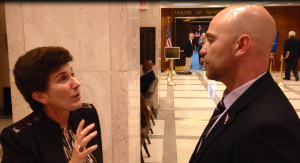 Those of us in the insurance industry had great hope for Workers’ Comp reform, which is going to cost all of us, due to rising premiums caused by various shenanigans, and for Assignment of Benefits (AOB) reform, too.  For those of you in the homeowners property insurance lines, you know what that’s doing to your company’s bottom line.  We were thinking great things and had great champions – such as Representative Jamie Grant from Hillsborough County, who decided he wanted to be the champion of AOB reform.

Rep. Grant wrote a very good and balanced bill (HB 1421) to reform AOB abuse, which passed the full House but never was heard in the Senate. For those of you who don’t know this young gun house member, he is tireless, a master of debate and a brilliant entrepreneur. His bill had three main components:

This is pretty common sense stuff. Rep. Grant’s commitment to finding balance in AOB abuse reform was evident in his opening remarks several weeks ago when he said he had a two-tier criteria for the bill – one to reduce rates and the other to ensure nothing is done to harm those with an actual loss.

On the last Friday in April, Rep. Grant left his office to head to the House floor with every intention of finding a way to pass this much needed legislation.  I met with him before he departed for the House chambers and saw the fire in his eyes.  His father, former Senator John Grant, was an incredible senator over 20 years ago and had the same passion for good insurance public policy, so Rep. Grant comes by it honestly.   In the end, the Senate’s refusal to hear this balanced and measured reform bill means consumer rates will continue their double-digit increase as the abusive AOB tactics continue.  More costly homeowners insurance means home ownership will become less affordable in Florida, too.

Those of us working on a compromise bill thought we were there.  The bill was passed by various committees and then the full House.  But in the Senate, we have members who don’t particularly like or are very distrustful of insurance companies.  It reminds me of the days of Governor Crist, who thought all insurance companies were greedy and didn’t care about consumers. Unfortunately in the Senate, we’ve gotten back to that point.  For whatever reason, we could not reason with the Senate. We thought we could, but during the last few days of session, we were not successful.

Our last hope was to include Rep. Grant’s solution along with a statutory rate decrease in Senator Brandes’ “catchall” bill (SB 454).  I sat down with the Senator near the end of session on the prospects of passage – he said it didn’t look good but “don’t quit trying”.  This is the fifth year we’ve attempted this.  And despite co-sponsor Rep. Plasencia’s confidence that we’ll get it done next year, it’s hard not to be disappointed.  It’s hard to put your arms around, because despite the data and examples showing the problem exists where consumers are victimized by AOBs and who the culprits are, nothng is getting done.

What it comes down to is one word: Greed.  Greedy third-parties and their advocates who are making a fortune representing vendors using Assignment of Benefits.  We need to find House members who have the guts to stop the greed. We need to keep up the fight to stop these bad people from doing bad things to our good policyholders.

(AOB was but one of the major insurance issues whose resolution remained elusive this past legislative session.  For insight on the other issues and the prospects for meaningful reform in 2018, I recommend a good listen to The Florida Insurance Roundup podcast.)