September 4, 2019, AM Update – Dorian is still a Category 2 Hurricane with 105 mph winds, located late this morning 90 miles due east of St. Augustine, moving north/northwestward at a faster speed now of 9 mph.  It is still moving parallel to the northeastern Florida coast.  Some of its outer bands swirling over the state are extending as far as 80 miles inland creating a good breeze but could have tropical-storm-force winds, especially from Volusia County north.

Forecasters are looking at higher wind gusts onshore today into this evening, even some hurricane-force gusts, as tropical-storm-force winds extend outward up to 175 miles from the center (hurricane-force winds extend outward only up to 70 miles from the center.)  Winds in early afternoon were as high as 41 mph along the northeastern Florida coast. 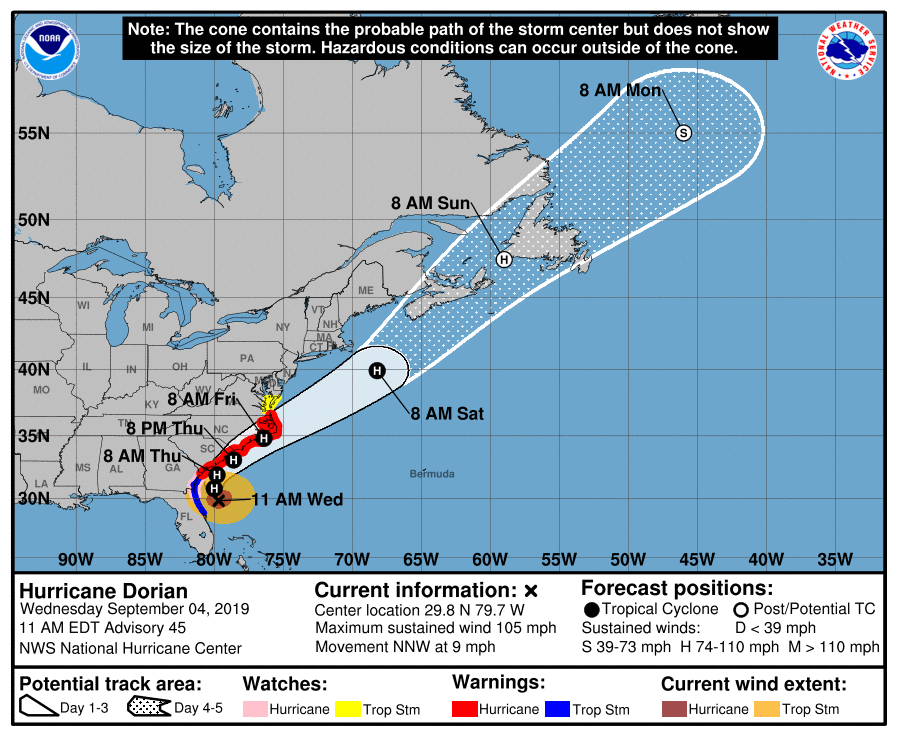 So the Hurricane Warning from the Volusia/Brevard County line to Ponte Vedra Beach has been changed to a Tropical Storm Warning.  There is still a Hurricane Watch in effect for Duval and Nassau Counties, the last two counties south of the Georgia state line.

Forecasters are expecting another 2-3” of rain and are monitoring for the potential for flash flooding, especially in Flagler County, which got the most rain last night.  There is still a Flash Flood Watch in effect for coastal and inland Duval and Nassau Counties until tomorrow morning. 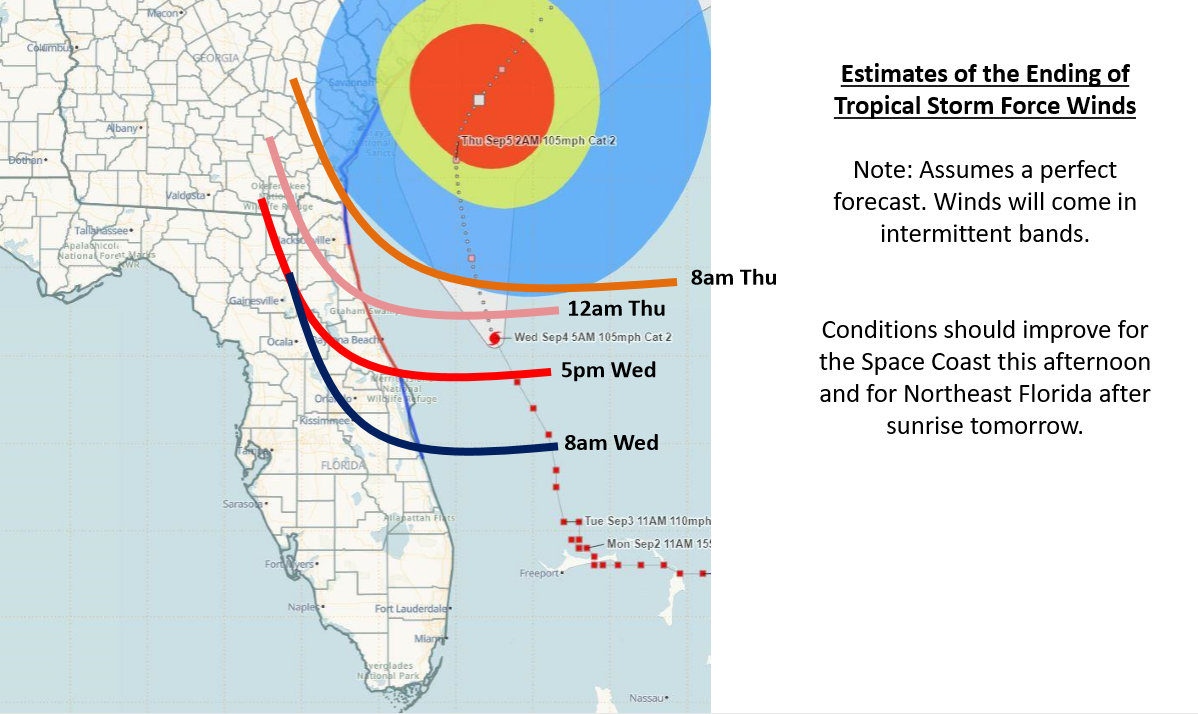 A Storm Surge of 3-5 feet is still a potential from the Volusia/Brevard County Line to the Savannah River in Georgia.  Forecasters are also keeping an eye on the St. Johns River, especially during high tide today.  The river is expected to crest tonight into tomorrow morning and there is a moderate flooding risk.  We will be watching that throughout the week as it slowly recedes.

A Storm Surge Warning remains in effect for north of Port Canaveral and extended now up to the North Carolina/Virginia border.  It has been discontinued south from Port Canaveral.  Click here for a full briefing with maps.

The only damage being reported so far is to beaches, such as erosion.  Full beach assessments are underway today along the Florida east coast from Brevard County south.  There is a Coastal Flood Advisory in effect for Southern Brevard County until 4pm this afternoon as additional coastal inundation is likely to occur at high tide this afternoon.

Dorian is now targeting the Carolinas.  A Hurricane Warning is in effect for north of the Savannah River in Georgia to the North Carolina/Virginia border. Interests elsewhere along the Mid-Atlantic coast of the U.S. should continue to monitor its progress

While Florida prepares to say goodbye to Hurricane Dorian once and for all, we are now watching Tropical Storm Gabrielle, which has strengthened over the eastern Atlantic Ocean.  Folks, we’re now in the heart of the Atlantic Hurricane season and we need to be prepared and diligent, not only over the next core 5 weeks, but beyond to the official end of hurricane season on November 30.  Hurricane Dorian has served as an excellent “real life drill” for Florida residents and disaster management officials on the state and local levels.  It will make us even more prepared and resilient for the next hurricane!

This is our 15th and final Hurricane Update on Dorian.  We’ve been producing two updates daily since last Wednesday morning as a service to catastrophe professionals.  We have received tremendous positive feedback from so many of you, relying on our up-to-the minute updates and insights. It has been a privilege to connect with our followers and supporters.  We hope you’ll subscribe to the LMA Newsletter to stay informed.  In the meantime, we are a phone call or an email away…always!