November 12, 2020, 4PM Update – Tropical Storm Eta exited Florida earlier this afternoon with lingering showers and windy conditions expected to end by this evening.  It made landfall around 4am at Cedar Key in the upper Gulf of Mexico with maximum sustained winds of 50 mph before crossing north Florida into Jacksonville later this morning.  It was a powerful rainmaker over the past four days in Florida, dumping upwards of 25 inches in parts of South Florida and 6-10 inches in parts of western, central, and north Florida.  As of 4pm this afternoon, Eta was sitting off the Georgia-South Carolina coast with maximum sustained winds of 40 mph, heading northeastward and expected to stay just offshore through North Carolina before heading fully out to sea tomorrow afternoon.

There is lingering coastal flooding this afternoon on the west coast from Tampa Bay northward and in the St. Johns River basin, due to Eta’s winds turning back as it moved across north Florida.  Minor river flooding is expected, with crests on Sunday.  The heaviest rainfall was along the coasts which spared more serious river flooding. 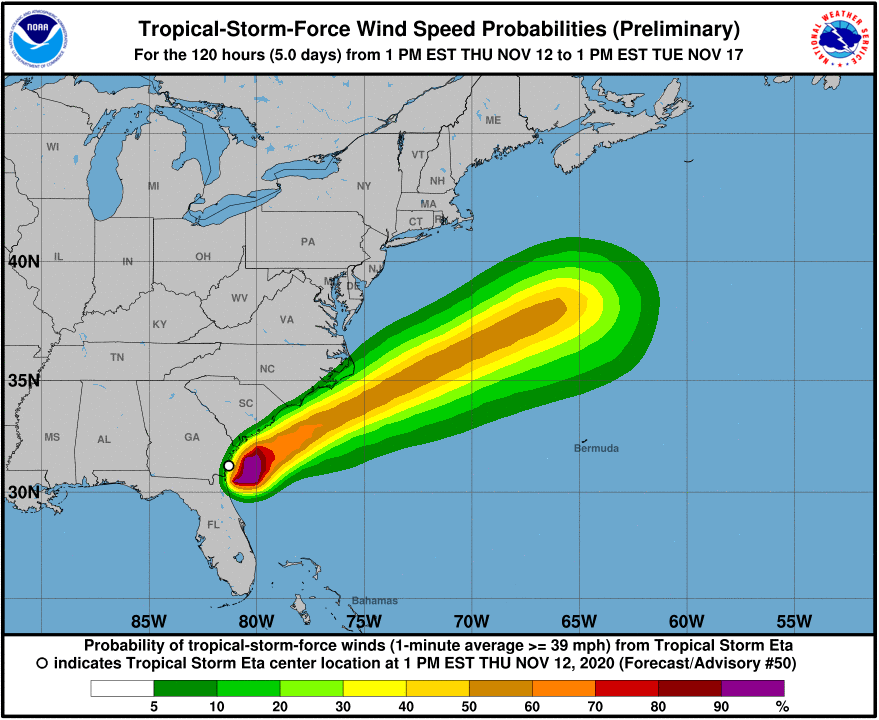 The worst flooding as of this morning seemed to be in parts of the greater Tampa Bay area, where about 7 inches of rain fell overnight.  Wind gusts of upwards of 50 mph caused mostly tree and sign damage.  About 50,000 residents were without power, with most restored by late this afternoon.  The eastbound lanes of the Courtney Campbell Causeway were closed last night as a sea of debris washed onto those lanes because of the winds, as shown in this video.  Those lanes reopened this afternoon.  The Tampa Bay Times posted this video late last night of flooding along Bayshore Boulevard in Tampa from wind driven wave overwash from Hillsborough Bay.

In Pinellas County, on the Gulf side, St. Petersburg, Madeira Beach, and Oldsmar had flooding.  The Sheriff’s Dept. had to rescue about 33 people overnight whose homes or cars had flooded.  Most flood waters had receded by midday today.  No injuries were reported, but one death is now being blamed on Eta.  A Bradenton Beach man was electrocuted when he stepped into his flooded garage, the apparent source a wet clothing dryer outlet in the garage.  Several shelters were opened in Pinellas and Hillsborough (Tampa) counties, but had less than 75 residents collectively.

In all, 21 of 67 counties in Florida were declared by the Governor’s Executive Order to be in a state of emergency, the first step to getting federal assistance for the costs involved in preparation and response.

As a Cat-4 storm last week, Eta carved a path through Nicaragua, Honduras, and Guatemala, killing dozens of people, before crossing the Caribbean Sea and striking Cuba on Sunday and then the Florida Keys early Monday morning.

Eta was the 12th named Atlantic storm to make landfall in the U.S. this year (beating the previous record of nine set in 1916) and the 28th named storm of this very busy season.  It becomes only the ninth tropical system in November in Florida over the past 100 years.

While the official end of the Atlantic hurricane season is November 30, we have more tropical activity in the Atlantic.  We’ll keep an eye on things and fingers crossed that we have now seen the last storm of 2020!  In the meantime, please know that we at Lisa Miller & Associates are here 24/7 for you.