September 21, 2020 – I spent this past weekend crisscrossing the Pensacola area helping homeowners and other insurance consumers in recovery efforts from Hurricane Sally.  (I’ll be here through tomorrow night and am happy to help any of my industry colleagues.)  Sally made landfall 30 miles down the road in Orange Beach, Alabama as a Category 2 hurricane last Wednesday with deluging rain and 105 mph winds.  I have some updated pictures to share from yesterday (including cars pushed across streets by the wind) and exclusive drone video and images from last week for those who haven’t read our Friday night update.

I was pleasantly surprised at the lack of widespread serious damage.  For the most part, big trees that fell did so in the street and not onto roofs.  The heaviest flooding was contained to the four blocks of downtown Pensacola streets leading to Pensacola Bay and to residents living on the barrier islands across the Bay.  More than 2 feet of rain was recorded at Naval Station Pensacola, with one spot recording 30 inches.

While there certainly was wind damage, all the buildings I saw were structurally intact.  There were utility poles down everywhere though and extra crews worked diligently restoring power, which is expected to be completely restored by tomorrow evening.  Escambia County (Pensacola) schools will remain closed therefore until Wednesday.  Next door in Santa Rosa County, all power has been restored and schools are reopening this morning.  Thankfully, no Florida deaths have been reported.

Initial damage estimates to both public and private property in the city and county are $139 million, not including key infrastructure, such as bridges.  AccuWeather estimates the total damage and economic loss caused by Hurricane Sally in the multi-state area will be $8 billion to $10 billion.

I’ll get to what I saw yesterday in a moment.  First, I want to share the most complete footage we’ve seen to date of the storm’s impact.  The following videos and still images are courtesy of the catastrophe professionals at Complete Inc. of Pensacola (www.teamcomplete.com) who were scoping damage immediately after Sally’s pre-dawn landfall Wednesday morning. They are expert forensic engineers and general contractors who handle everything from insurance claims appraisal and arbitration to general contracting cost estimates and forensic engineering on building defects. Their specialty is large loss appraisals to take a closer look at disputed insurance claims and as such, their work is indispensable.

You may have seen still images of the damage to the Pensacola Bay Bridge (known locally as the “Three-Mile Bridge) created by a loose barge that’s part of the construction of the new southbound span, linking Pensacola to Gulf Breeze, on the barrier beach. But here’s the drone video you haven’t seen:

There were other barges which made various landfalls on the Pensacola side of the bay. One barge wiped out the 18th hole of a local country club on Pensacola Bay. Another barge came perilously close to striking the Interstate 10 bridge over Escambia Bay, a previous victim of Hurricane Ivan, 16 years ago to the day. The storm also caused damage to the under construction northbound span of the bridge. As a result, Gulf Breeze residents now face an hour commute into Pensacola via the more circuitous Garcon Point Bridge.

A three- to four-block stretch of downtown Pensacola coastline suffered flooding from the rain and estimated 5.5 feet of storm surge from Pensacola Bay. This is the drone video of the area around Community Maritime Park, which sits on the Bay, showing from South Spring Street, then turning west along a deluged Main Street, and then north into the heart of downtown:

In this next drone video, you can see cars navigating flood waters nearly up to the door handles, as the drone follows along, heading east on Main Street. At about 25-seconds in, you’ll see the famous intersection of Main Street and Palafox Street, in the heart of the city’s entertainment district:

The Complete Inc. survey team noted relatively few properties were flooded in downtown Pensacola. There will likely be more wind damage than flood damage. Across Pensacola Bay however, in the town of Gulf Breeze at sea level, up to 7 feet of forecasted storm surge created significant flood damage.

Here’s a birds-eye (drone) look at damage to a commercial building downtown:

Before I get to my Sunday pictures, here is a collection of still images from last Wednesday, just hours after Sally made landfall, courtesy of the Complete Inc. survey team.  They show the various damage from wind and flooding to both residential and commercial properties. 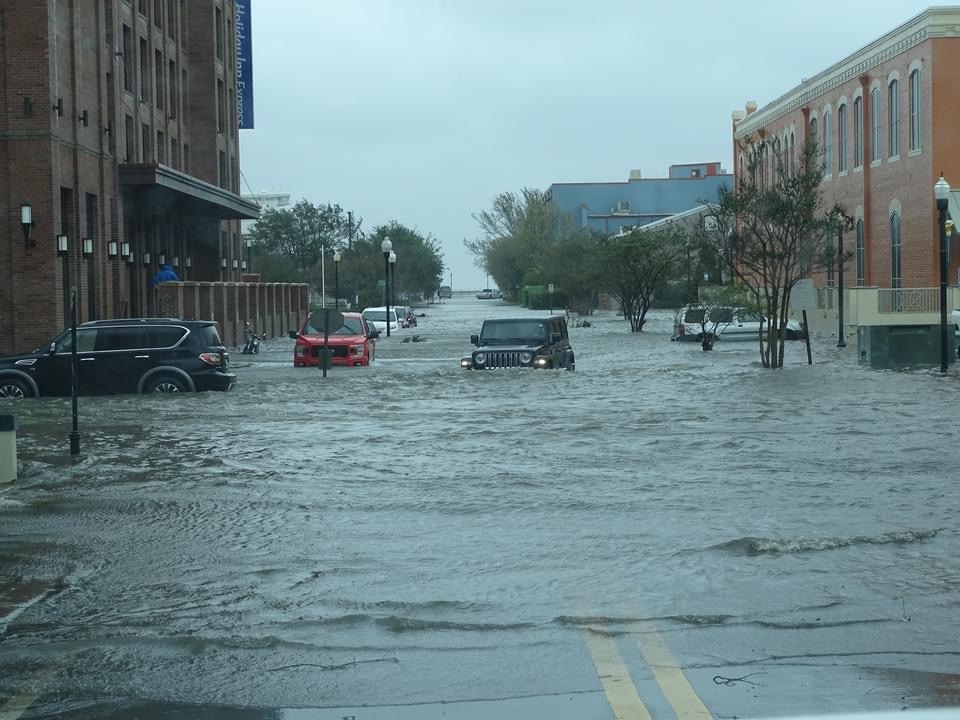 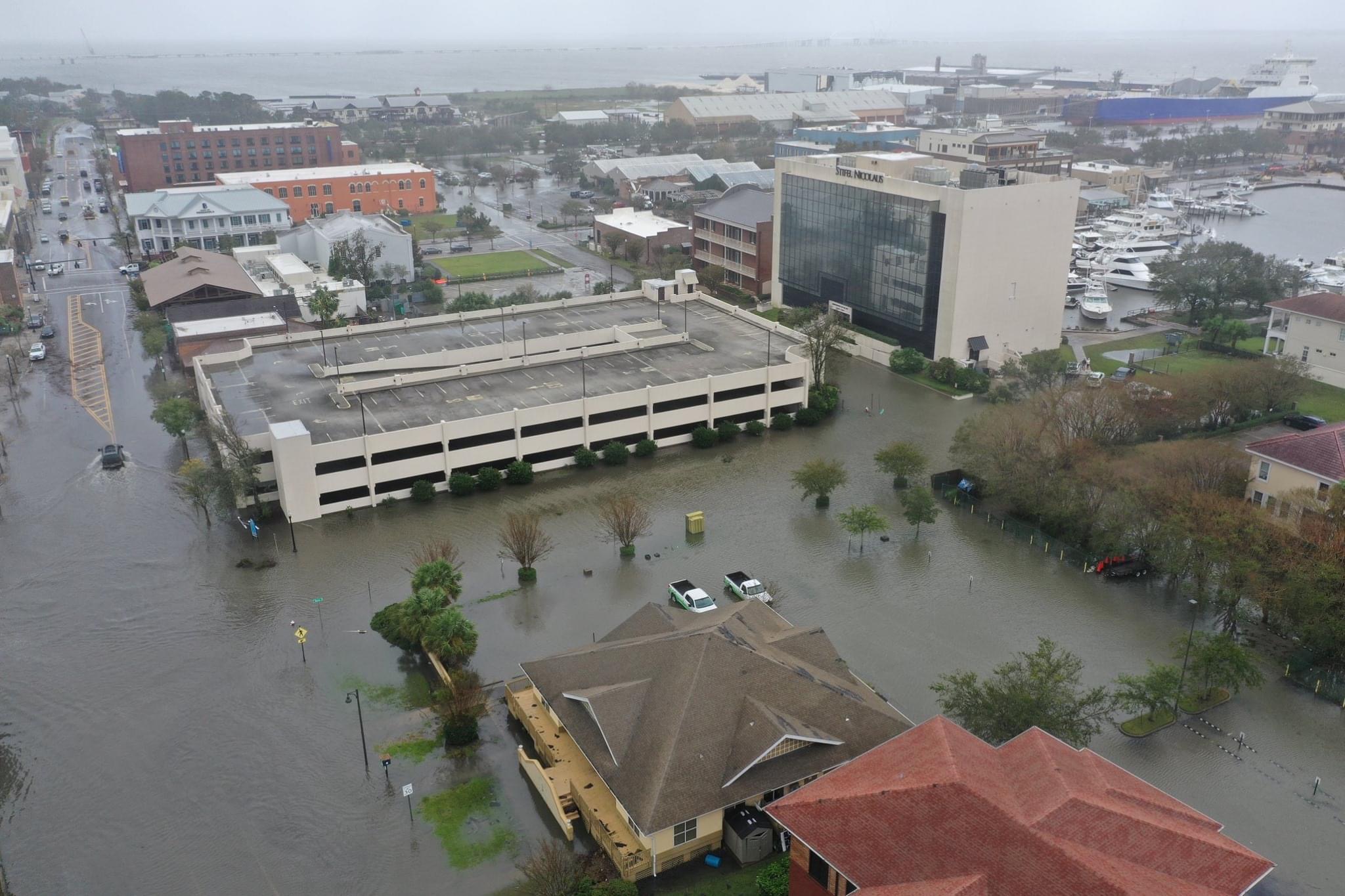 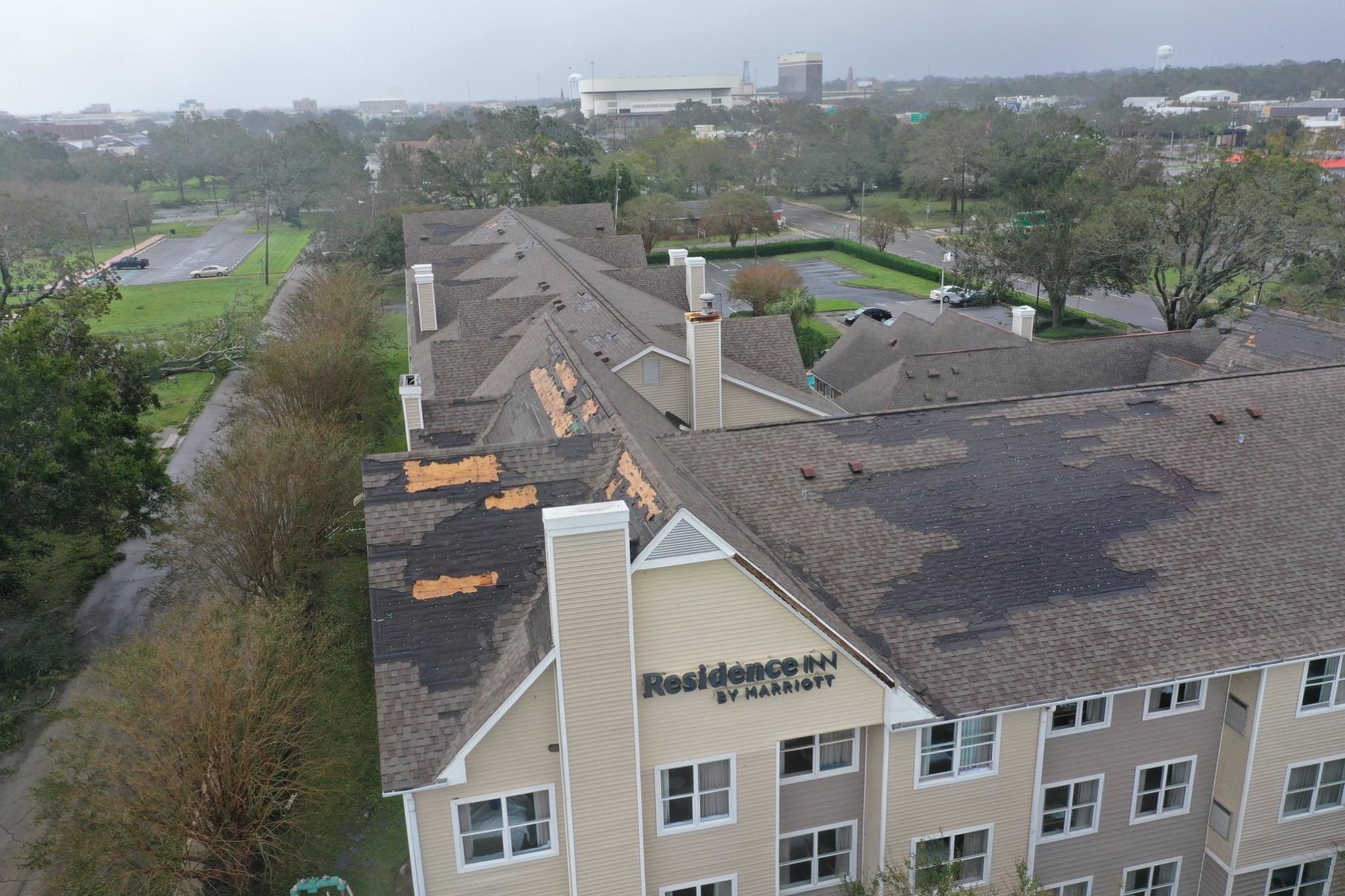 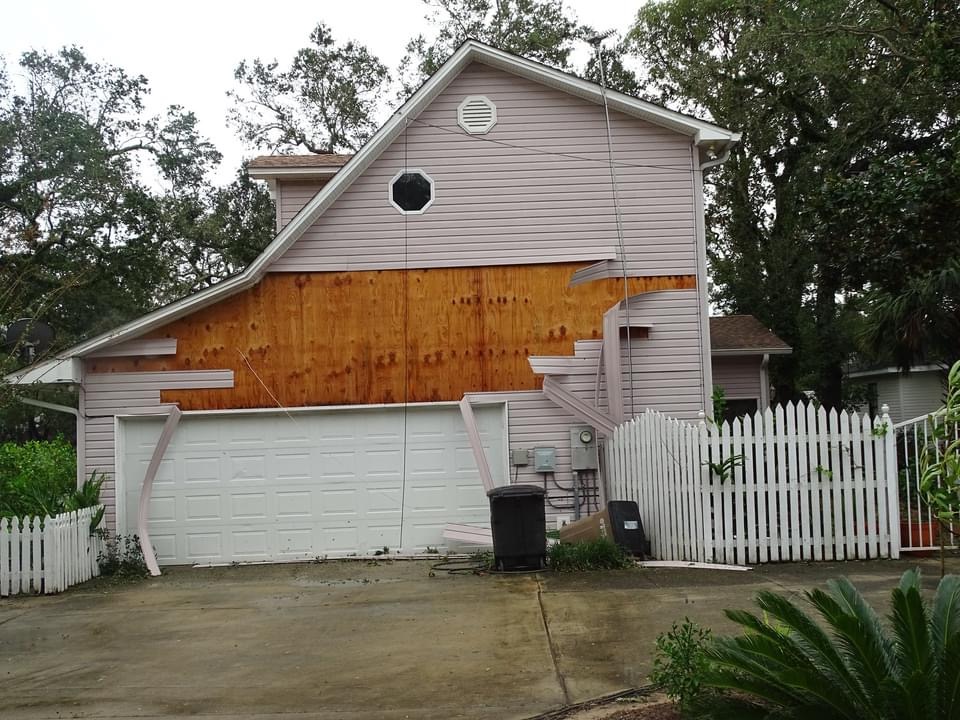 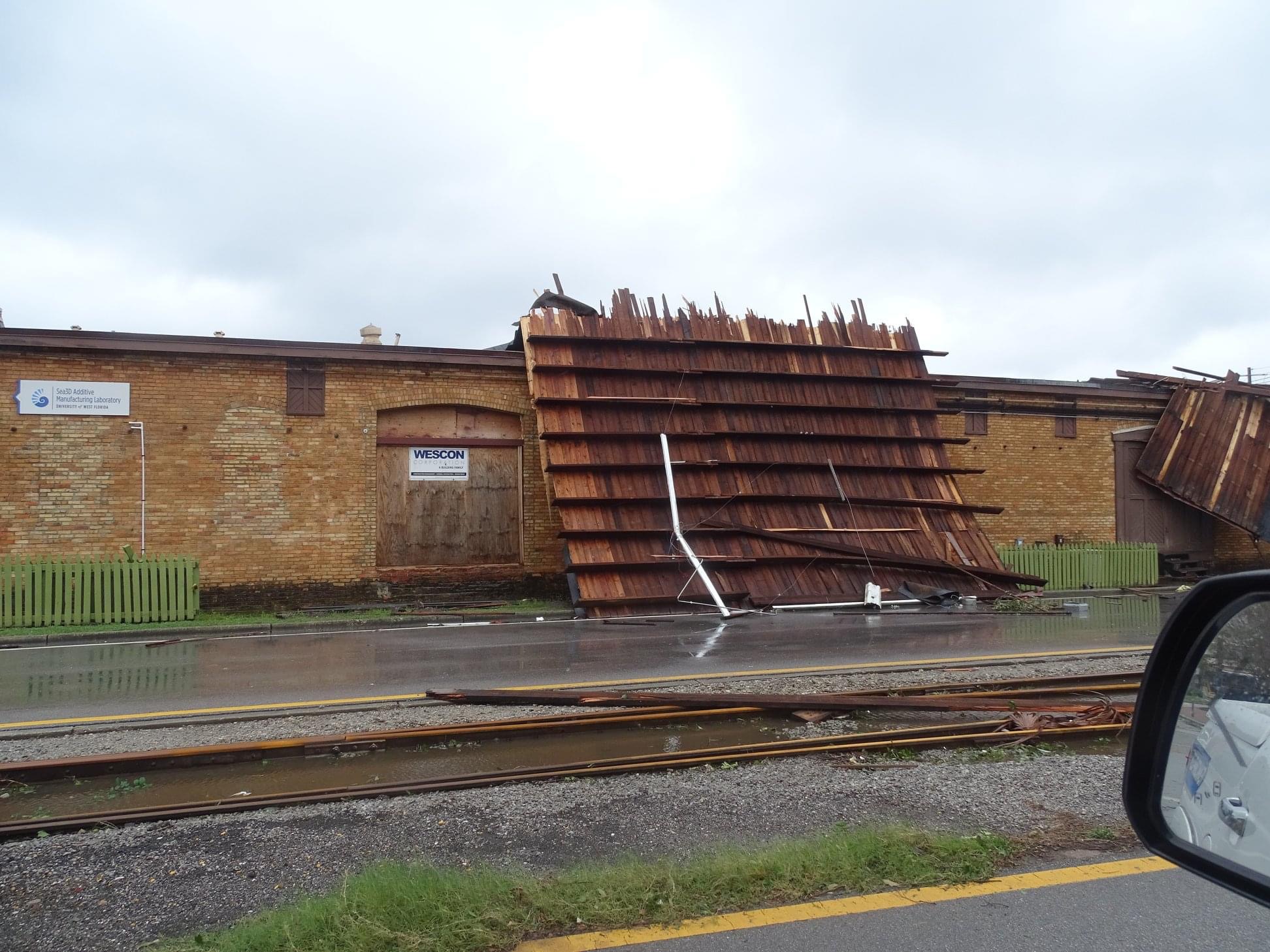 A section of roof peeled off a commercial building lies on its side in downtown Pensacola, Florida, September 16, 2020. Courtesy, Complete Inc., Pensacola, FL 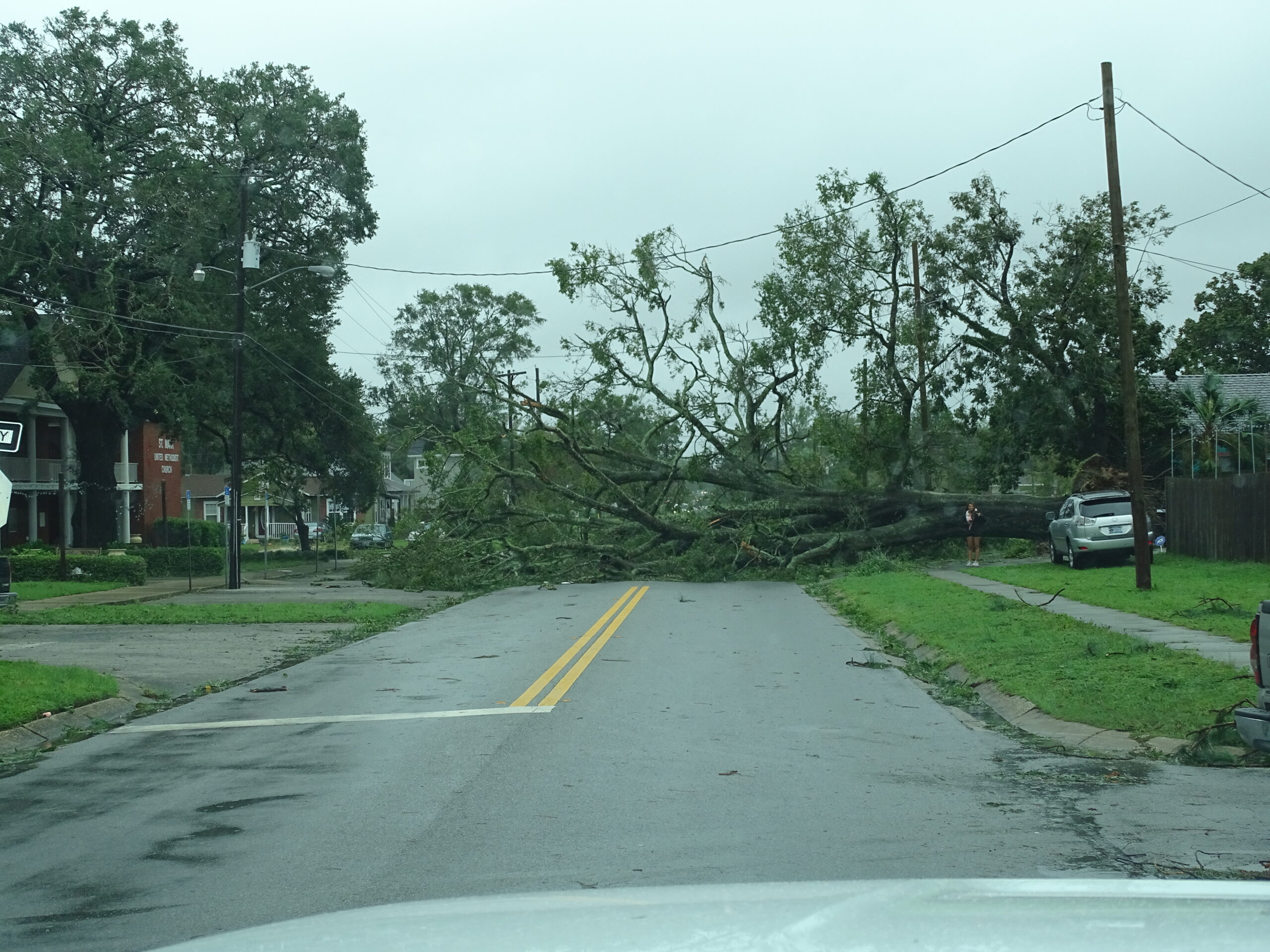 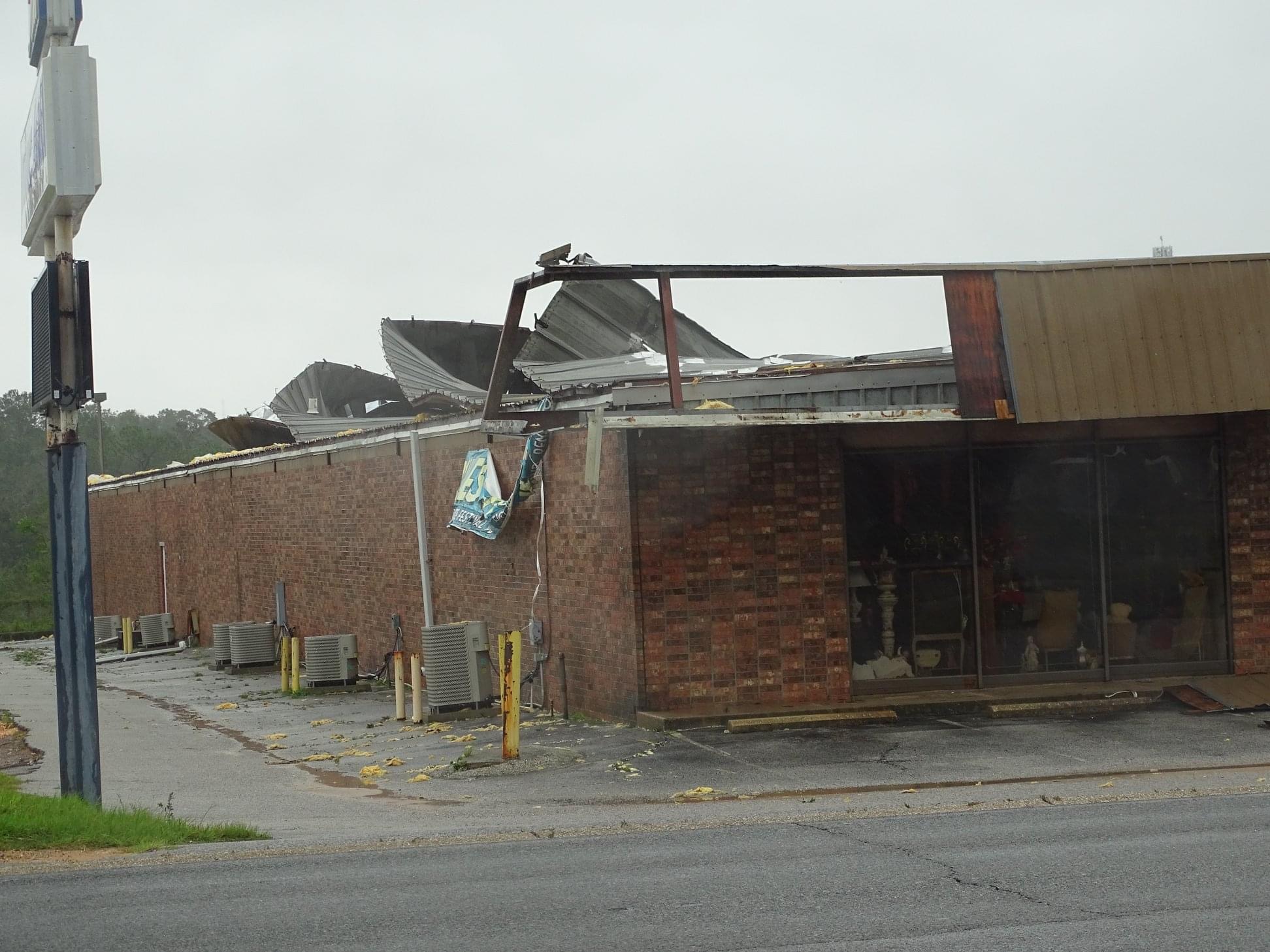 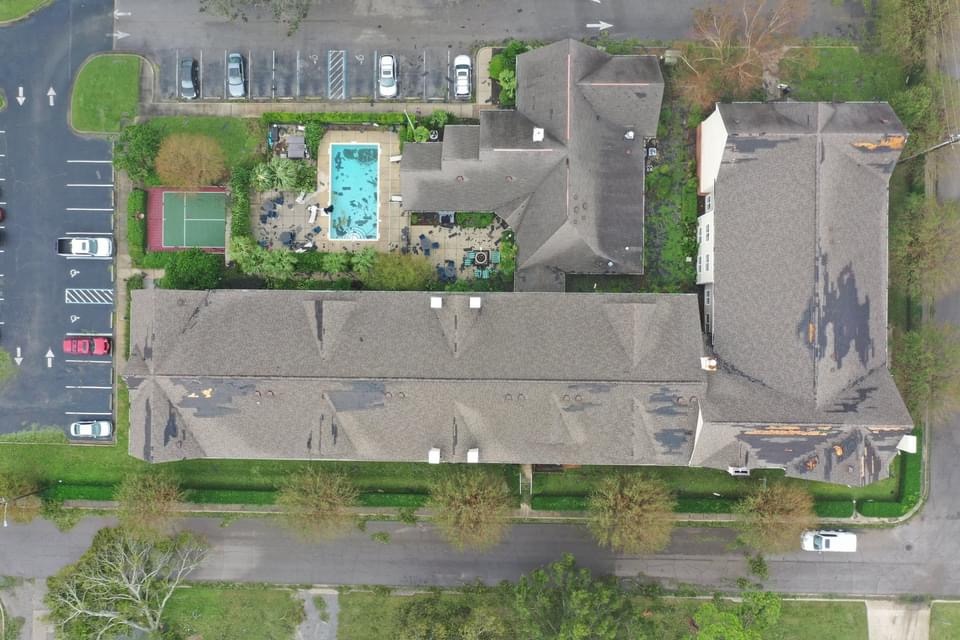 To be clear, the wind was a major factor for residents living along the water.  I took these pictures (below) yesterday of a home built on pilings that sits right on Escambia Bay in Pensacola’s Riverview section, north of Interstate 10.  The homeowners rode out the storm in an upper bedroom with their two small children.  This is a three-story house where the ground floor had been mostly enclosed with breakaway walls.  Two walls indeed broke away, the remaining two only partially.  The funneling wind off the bay pushed their brand new car into an outside staircase. 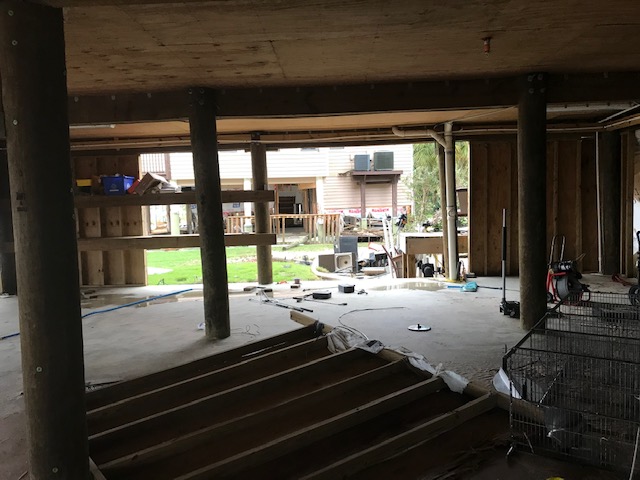 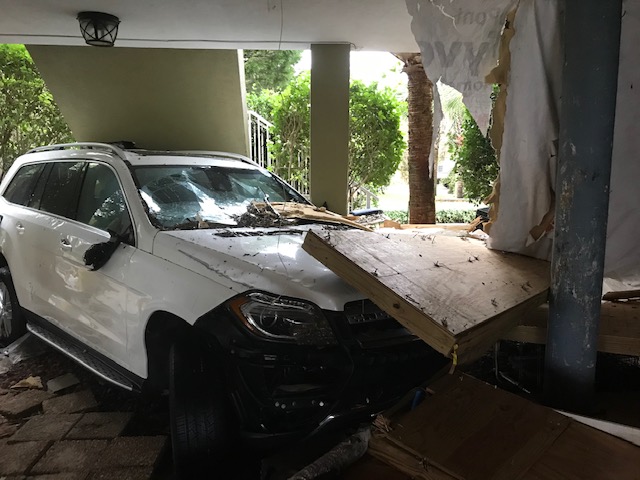 The wind was strong enough to push two other cars across the street into their neighbor’s driveway and underneath his house.   There was damage to the home’s exterior, where stucco had been stripped off the outside wall and landed in woods across the street, along with a random staircase from another house.   There was evidence of interior water damage from the roof but otherwise was intact. 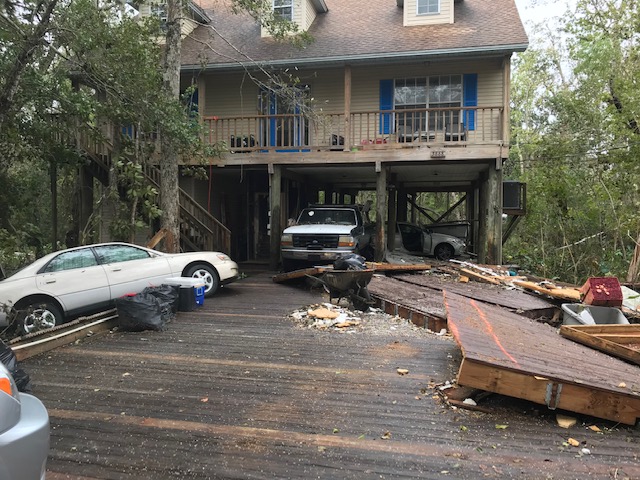 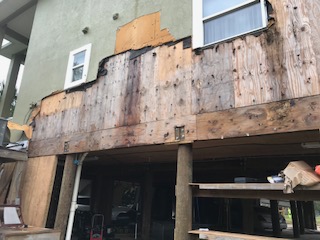 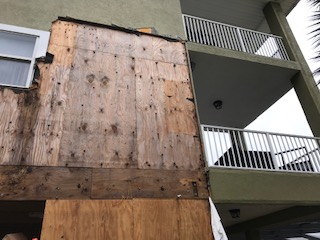 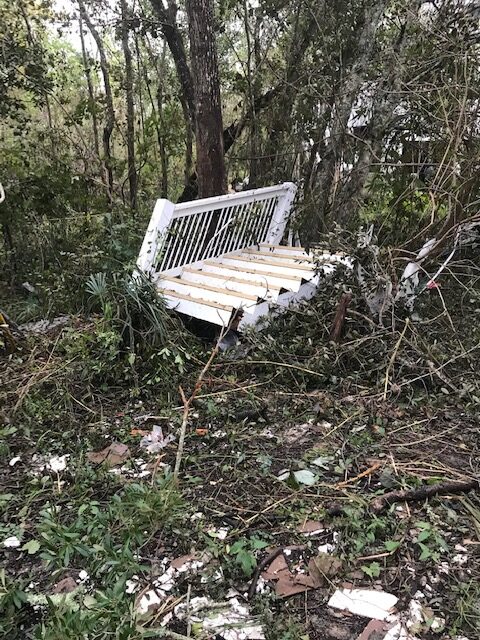 If you’d like to help victims of Hurricane Sally in need, you can donate via The Florida Disaster Fund, the State of Florida’s official private fund established to assist Florida’s communities in times of emergency or disaster.