Florida’s new Emergency Management Director Kevin Guthrie made a poignant point in a recent speech.  He warned against the “Amazon Culture” where people expect things quickly, including hurricane recovery.  “Had Hurricane Dorian actually hit Broward and Palm Beach County 18 months ago, as of this month, we would still be picking up debris today,” Guthrie said.  Dorian is the Cat-5 storm that leveled parts of the Bahamas in September 2019 but slowed and thankfully took a northward track at the last minute, avoiding Florida.

We are just two weeks away from the official start of the Atlantic hurricane season.  Projections are for an above average number of hurricanes, but hopefully fewer than last year’s record setting 30 named storms and the record 12 that made landfall.  Here’s the latest on preparation, fraud warnings, institutional readiness, and resiliency efforts. 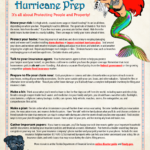 Preparing for Storms & Fraud: Florida’s annual 10-day Disaster Preparation Sales Tax Holiday runs from May 28-June 6.  No sales tax will be charged on hurricane related items, such as flashlights, fuel containers, tarps, and portable generators costing $750 or less.  Insurance Consumer Advocate Tasha Carter has issued the Plan Prepare Protect: Are You Disaster Ready? guide to educate consumers on specific hurricane preparedness and recovery steps they can take before, during and after a disaster.  She’s also reissued her Demolish Contractor Fraud: Steps to Avoid Falling Victim, noting in a release “I want you to be aware of dishonest vendors looking to take advantage of you during vulnerable times such as after a disaster.”  Amen!  And to help you and your insurance clients, we’ve reissued my Lisa’s Lucky 7 Hurricane Season Prep!  You can click the image above for the full view and printable version.

One of the harshest lessons from 2017’s Hurricane Irma was the 12 people who died in a South Florida nursing home afterward from the lack of air conditioning due to the storm’s electricity outages.  Going into this season, the News Service of Florida reports the vast majority (97%) of Florida nursing homes and assisted living facilities are now in compliance with rules requiring them to have emergency backup generators and 72 hours of fuel on-site. 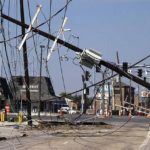 Resiliency: Governor DeSantis announced last week that more than $111 million has been awarded to 22 communities through the Florida Department of Economic Opportunity’s Rebuild Florida General Infrastructure Repair Program for communities impacted by Hurricane Michael.  This increased federal and state funding to harden our infrastructure make Florida more resilient to future hurricanes.  Craig Fugate, former FEMA Director and former Florida Emergency Management Director, recently shared this with WPTV-TV, on his new job consulting for the emergency management curriculum at Indian River State College: “How many times have you heard it called a natural disaster.  I’m like, ‘There’s no such thing.  It’s a natural hazard.’  It only becomes a disaster where and how we have built,” Fugate said.

And a last bit of good news.  The Iowa Legislature has passed the “Private Primary Residential Flood Insurance Model Act” after the national model act of the same name.  House File 583 exempts rates from prior approval, among other features, to encourage a vibrant private market as an alternative and complement to federal flood insurance.  Iowa joins Alabama and South Carolina with new laws, with another bill pending in the Louisiana Legislature.