“Highest premiums in the nation”

Another Florida property insurance company goes into receivership, a roofing industry lawsuit is dismissed, Citizens Property Insurance has its rate hike request trimmed, and it’s official: Florida now has the highest homeowners insurance premiums in the country.  It’s all in this week’s Property Insurance News.

Southern Fidelity Insolvency: Despite its recent efforts to find other carriers to take some or all of its 78,000 homeowners policies in Florida and secure adequate reinsurance for the hurricane season, Southern Fidelity Insurance Company was ordered into receivership on June 15.  Its remaining policies will be canceled by July 16, including its 69,000 policies in Louisiana, Mississippi, and South Carolina.  It is the fourth Florida insolvency this year.  Parent Gulf & Atlantic Insurance Companies had pumped more than $200 million into the company since late 2020 to try to avoid this eventuality.  Some policies will surely be picked-up by Citizens Property Insurance, the state-backed insurer of last resort.  The Florida Insurance Guaranty Association (FIGA) is now left to pay Southern Fidelity’s outstanding claims.

Does FIGA Have Enough Cash? That was the very question asked by FIGA’s Executive Director Corey Neal at last week’s Board of Directors meeting.  “The answer I would say now is we don’t know.  We need more time to figure out what ultimately, the Southern Fidelity liquidation is going to cost FIGA.  We have enough cash to pay its returned premiums, due by late August into September.  We may need to extend our assessments but will know more in about 30 days,” Neal told the Board.  FIGA can levy assessments on insurance policies throughout the state to help pay claims of insolvent carriers.  Among the potential options he outlined: Borrow $140 million and extend the 2021 0.70% assessment or borrow $250 million and extend the 2021 and 2022 (1.3%) assessments.  And more insolvencies may be on the way.

And What of Citizens? As we reported in late March, Citizens Insurance is losing money to the tune of about $100 million a year.  Yet all these insolvencies are driving its policy count (and associated risk) ever higher: the company had a tad under 900,000 policies in force on June 17 and is now on track to hit the one-million policies mark by September (see chart below).  Like FIGA, Citizens can levy assessments, too, but on nearly every single property & casualty line in the state if needed should a future storm or storms wipe out its reserves.  Citizens’ January request to the Florida Office of Insurance Regulation (OIR) to raise its rates to the maximum allowed by the legislature (11%) was trimmed by OIR Order this past Friday.  In the homeowners (HO 3) line, Citizens had asked for an overall10.7% increase – OIR approved a 6.4% increase, effective September 1. 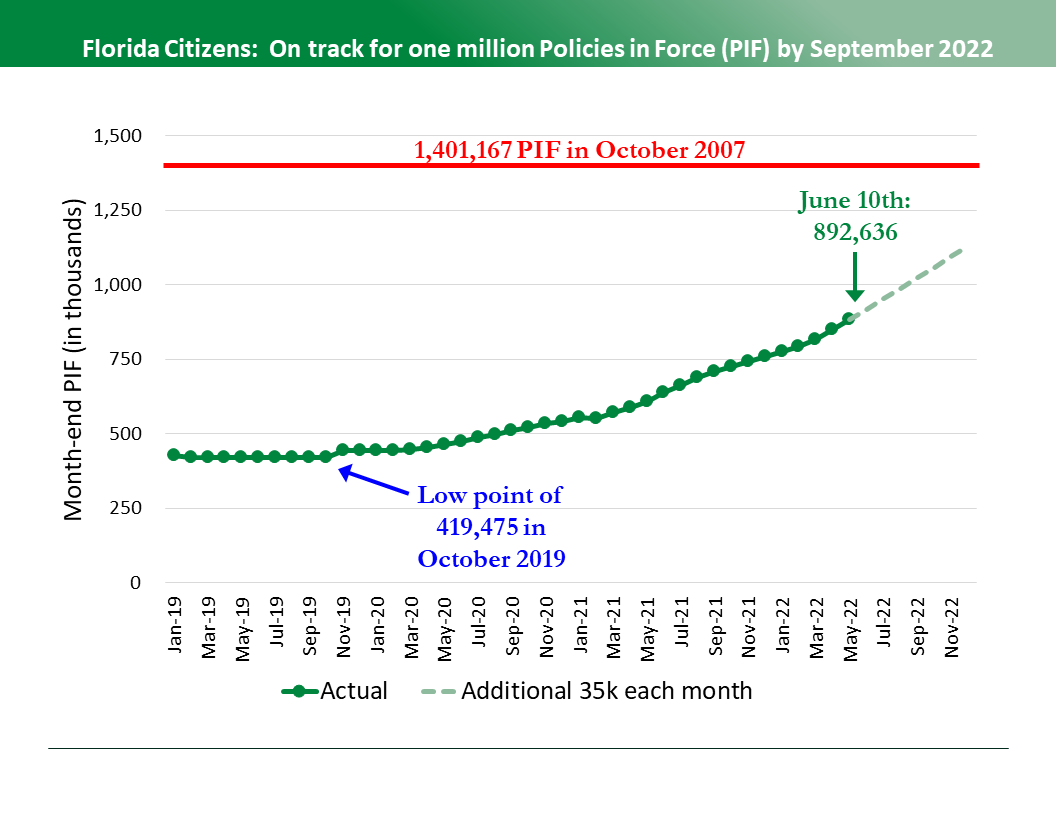 The Biggest Loser: Of course, the biggest losers in all of this are Florida’s approximately 7.5 million property insurance policyholders.  And now it’s official.  The Insurance Information Institute reports that Florida homeowners premiums are the highest in the nation.  The average policy is $4,231, almost three times the US average ($1,544) and up from the $2,505 average just two years ago, “for reasons having little to do with their exposure to hurricanes,” said the Institute’s CEO Sean Kevelighan.  “Floridians are seeing homeowners insurance become costlier and scarcer because for years the state has been the home of too much litigation and too many fraudulent roof replacement schemes.”

Speaking of Roofers: A federal judge has dismissed one of two lawsuits filed by the roofing industry which claimed the Florida Legislature’s 2021 litigation and solicitation reform (SB 76) infringed on First-Amendment free speech rights. The judge had previously granted a preliminary injunction blocking the state from enforcing the roofing solicitation restrictions of the law.  But after the legislature in last month’s special session passed SB 2-D clarifying the 2021 law, the case is now moot, per a filing by attorneys for both sides.