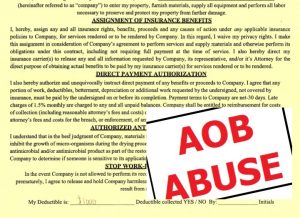 The Florida House of Representatives on Wednesday will take up its version of Assignment of Benefits (AOB) reform which now includes a late amendment adding a data component to quantify future savings from reforms that would be passed along to consumers.  The bill goes farther than its Senate counterpart, which is still awaiting a final committee meeting before being presented to the full Senate.

The amendment to the House’s HB 7065 is a nod to reform critics who argue that if AOB abuse is so prevalent (which it is) and driving such huge increases in homeowners insurance rates (which it is), then any reforms should come with the guarantee of rate reductions.  While the legislature can certainly influence the state-run Citizens Property Insurance Corporation, it sets a perilous precedent to try to manipulate the market, similar to the manipulations of Governor Charlie Crist with HB 1A in 2007.  Citizens, the state’s “insurer of last resort”, currently serves 421,000 customers.

So the new version of HB 7065 would prohibit Citizens from implementing rate changes this year for HO-3 (Homeowners) and DP-3 (Dwelling-only) policies unless the rate filing reflects projected rate savings from this act.  Such a rate filing must include an exhibit demonstrating the impact of this act on indicated rates for DP-3 and HO-3 policies.  The amendment requires Citizens to provide policyholders with details on the projected rate savings from this act.  The bill now has the backing of House Speaker Jose Oliva.

Citizens filed its 2019 rates last December, asking for a statewide average 8.2% increase from the Office of Insurance Regulation, which held a public hearing last month on the request but has not publicly ruled on it.   Citizens President and CEO Barry Gilway has said  that if not for an increase in non-catastrophic water loss claims and explosive litigation largely from AOB disputes that end up in court – Citizens would not be asking for a rate increase at all.

The Senate’s version of AOB reform, SB 122, has not been scheduled for its last committee hearing, a requirement before being presented to the full Senate.  It differs from the House bill, in part, by how it limits the abusive effects of the state’s one-way attorney fee.  For details on the specific provisions in both bills, please see this edition’s Bill Watch.  This is the seventh year AOB reform bills have been debated in the legislature – none have passed both chambers.

One man who can also tell you what AOB is costing Florida homeowners is Wesley Todd, CEO of CaseGlide, a Tampa claims litigation management firm.  He was my guest on the just released episode of The Florida Insurance Roundup podcast, “The AOB Problem.”  Citizens’ CEO Gilway constantly refers to CaseGlide as the go to source for litigation trends.

CaseGlide’s analysis of 100,000+ claims reveals AOB litigation on average is costing each insurance company doing business in Florida $50 million a year which equates to about $400 for each of Florida’s six million property insurance policyholders.

Wes is very frank in his take on Florida’s AOB problem, saying the current abuse of AOBs and the one-way attorney fee law that fuels them, amounts to the legislature “giving to a small set of 10-15 trial lawyers $1 billion per year by lack of reform” of these abuses.  You can listen to the podcast here and read a summary of Wes’s interview in the Show Notes section.