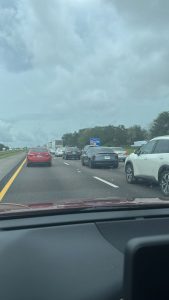 Evacuation traffic from Tampa to Orlando on Interstate 4 on September 27, 2022. Photo by Anastasia Economides @aecono via Twitter

September 27, 2022, PM Update – Hurricane Ian is about 24 hours away from landfall and tonight it’s getting bigger and more threatening to Florida with maximum sustained winds of 120 mph as a Category 3 storm.  While landfall will be significant, the story tonight is its expected growing impact to the interior of Florida – all the way to the east coast and north – as it slows almost to a crawl and literally dumps rain on most of the state.  “The impacts are going to be far broader than from just where the storm makes landfall,” warned Governor DeSantis today.  “In some areas, there will be catastrophic flooding and life-threatening storm surge.”  He warned those living from Naples north through north of Tampa to be so warned and prepared.  Evacuations of 2.5 million people are underway from Fort Myers north through Pasco County, north of Tampa.

While some may be comparing it to 2004’s Hurricane Charley, a Category 4 storm that went inland sooner than expected, the Governor made it clear that Ian will be different, even if it takes a similar path to Charley.  “Most of the damage from Charley was from wind.  What we have here is really historic storm surge and flooding potential.  The storm surges you’re going to see generated from this is going to far eclipse what we saw there.”  He warned that Tampa Bay will still get significant impacts and the storm could always wobble again between now and landfall tomorrow night.

We’ll focus on the insurance impacts of the storm first, and then the latest from NOAA on Ian’s conditions as of 7pm this evening and the forecast.

Infrastructure: State Emergency Management Director Kevin Guthrie said today to expect power outages across the state of three, five, or seven days or more.  More than 30,000 linesmen have been staged near key areas, ready to handle power outages.  Representatives from the top 3 cellular phone providers were in the state Emergency Operations Center today, he said, “but we expect towers to go down in this storm as they did in previous hurricanes” and he advised residents to have an alternative plan of communication.  The same advice can be applied to insurance industry interests.

Potential Insurance Payouts: State Senator Jeff Brandes took to Twitter to provide some back of the napkin calculations on insurance impacts, beginning with the amount that Citizens Property Insurance would have to pay out in a Tampa Bay area landfall (he estimated $10B) and then the total insurance payout including the rest of the companies in the market (he estimated $40B).  That’s just for insured properties, Sen. Brandes pointed out.   Governor DeSantis was asked today, based on the Senator’s calculations, if there is some contingency plan in place beyond what the Governor and Legislature approved this year, perhaps to include lowering the Hurricane Cat Fund cap.

“We have a Cat Fund that’s flush.  We put another $2 billion in an added layer of protection,” the Governor replied.  “I would say though, we are looking at a lot of flood claims…and why people have said that’s the one place in Florida that could have the most damage is because that water has got nowhere to go in Tampa Bay.”  The Governor said there’s close to one million federal flood policies in the Tampa Bay area, which is an issue separate from wind.  “I’m not saying there’s not going to be wind…of course, there’s more that I want to do in terms of the wind insurance and that’ll be something that that we’re going to address.  At the end of the day, we’ve got to make sure folks are taken care of and so we will do that, whatever we need to do.”

Insurance Consumers: I did several interviews today with news media, talking about how consumers today should pull out their insurance policy (or go to their insurance company’s webpage) and look at the Cover Page, which outlines Coverage A, B, and C, and I explained what those coverages protect.  Then keep the policy with you for the next few days.  I also explained the common confusion consumers have between their insurance company and their insurance agent.  I also shared my Hurricane Ian Claims Damage Tips, including taking videos now of the outside and inside of your house to speed your claim after the storm.  But most importantly, I advised that residents should not answer their front door because the crooks are already out canvassing. I again stressed the need for patience in the days ahead, both with response and recovery efforts.

Business and Industry Concerns: On today’s private sector conference calls, Secretary Melanie Griffin of the Florida Department of Business and Professional Regulation (DBPR) said she remains concerned about unlicensed contractors.  Griffin said the department is working with the Disaster Contractors Network, which is making a list of licensed contractors available to consumers and businesses at www.dcnonline.org.  The DBPR’s MyFloridaLicense.com has additional information.

There is continued concern about access to affected areas after the storm, especially for insurance adjusters.  They have had problems in past storms receiving clearance from local law enforcement to go into impacted areas to begin the insurance claims process.  The statewide private sector re-entry program delineates what documents you will need to present to local officials when seeking re-entry.  On today’s call, a representative from the Florida trucking industry said they are encouraging local communities and their law enforcement to allow digital copies in lieu of paper copies of needed documents (such as a bill of lading for truckers).  “They can’t exactly run to a Kinko’s to make paper copies,” the representative said.  Good point!  We’re following up.  Please let us know if you encounter difficulties with re-entry access from skeptical local authorities.

The state does have a Business Emergency Operations Center with its stated purpose to identify needed resources before, during and after the storm.  “We want to make sure businesses across the state are prepared and can resume normal operations as soon as possible,” said Dane Eagle, Executive Director of the Florida Department of Economic Opportunity, on today’s call.  Their website for this purpose is FloridaDisaster.biz.

The Governor said tonight he anticipates recovery will be slower than in past storms, due to the national supply chain issue, including replacement electrical transformers, as we reported in a recent LMA Newsletter.

Current Warnings/Watches as of 5pm today: 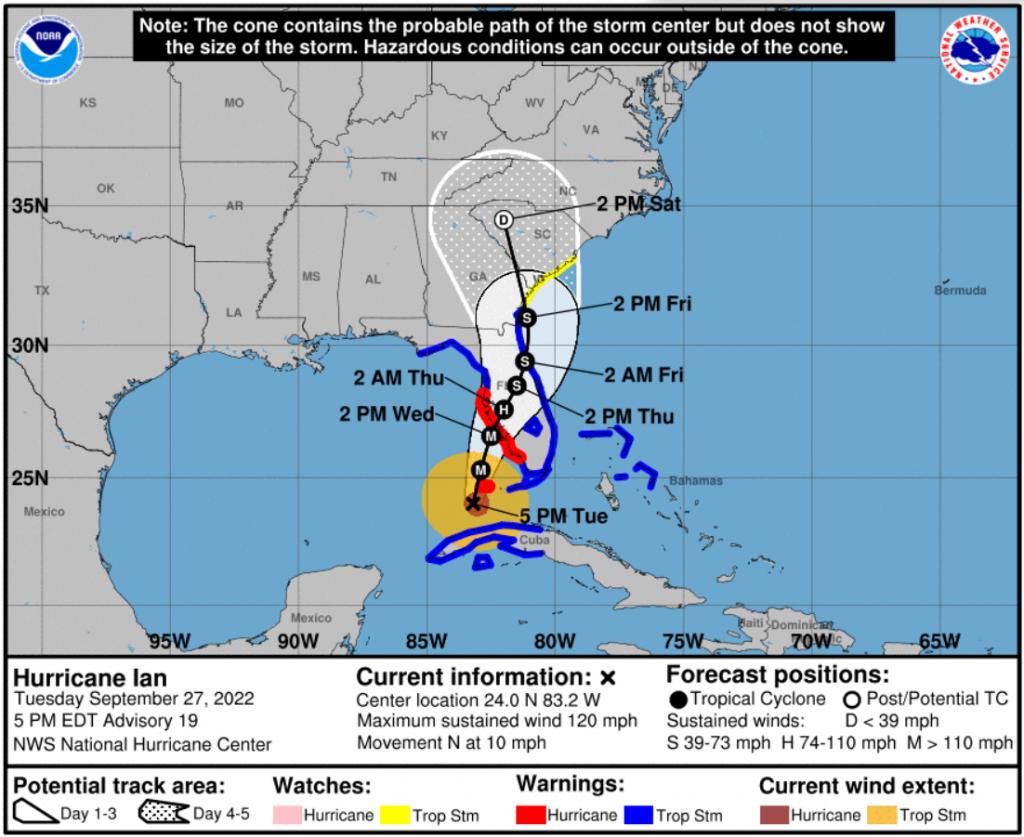 Maximum sustained winds remain near 120 mph with higher gusts.  Re-strengthening is expected tonight through Wednesday.  Ian is forecast to approach the west coast of Florida as an extremely dangerous major hurricane.  Hurricane-force winds extend outward up to 40 miles from the center and tropical-storm-force winds extend outward up to 140 miles.

Hurricane conditions are expected along the west coast of Florida within the Hurricane Warning area on Wednesday morning, with tropical storm conditions possibly beginning tonight. 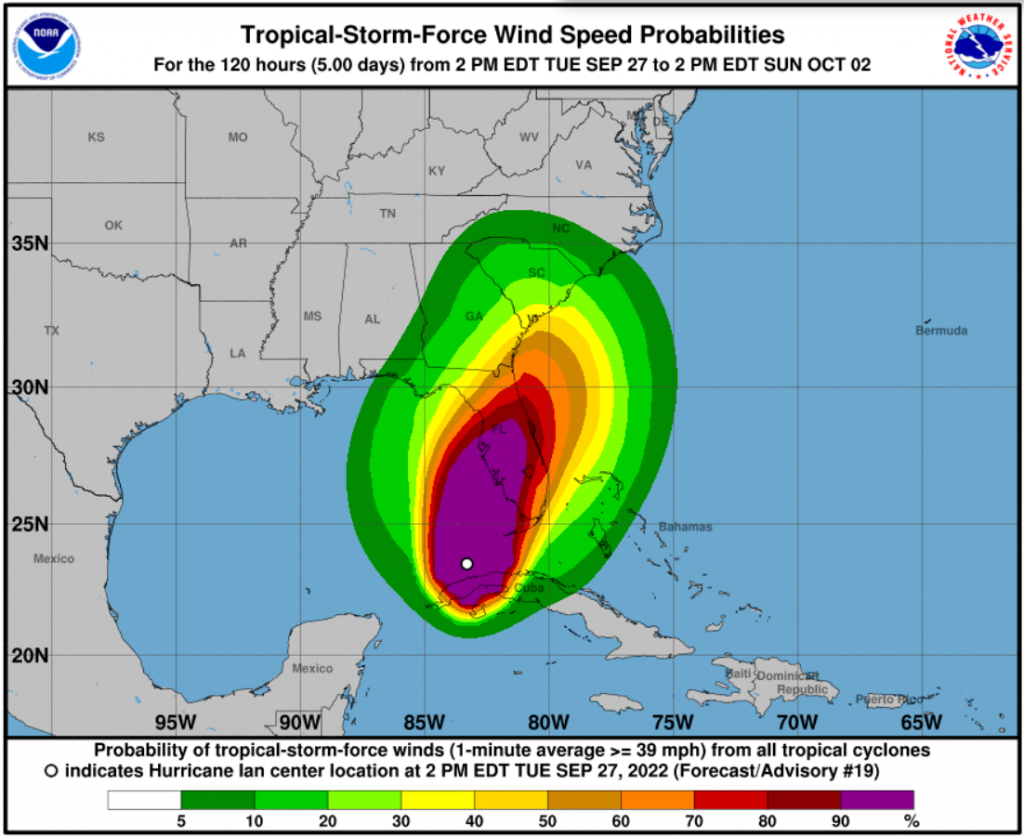 The combination of storm surge and the tide will cause flooding along the coast and moving inland.  The middle of Longboat Key south to Bonita Beach, including Charlotte Harbor could see water reach heights of 8-12 feet above ground if the peak surge occurs at the time of high tide.  Bonita Beach south to Chokoloskee in the Everglades could see heights of 6-9 feet.  The middle of Longboat Key north to the Anclote River in Tarpon Springs, including all of Tampa Bay is now forecast to see heights of 4-6 feet. 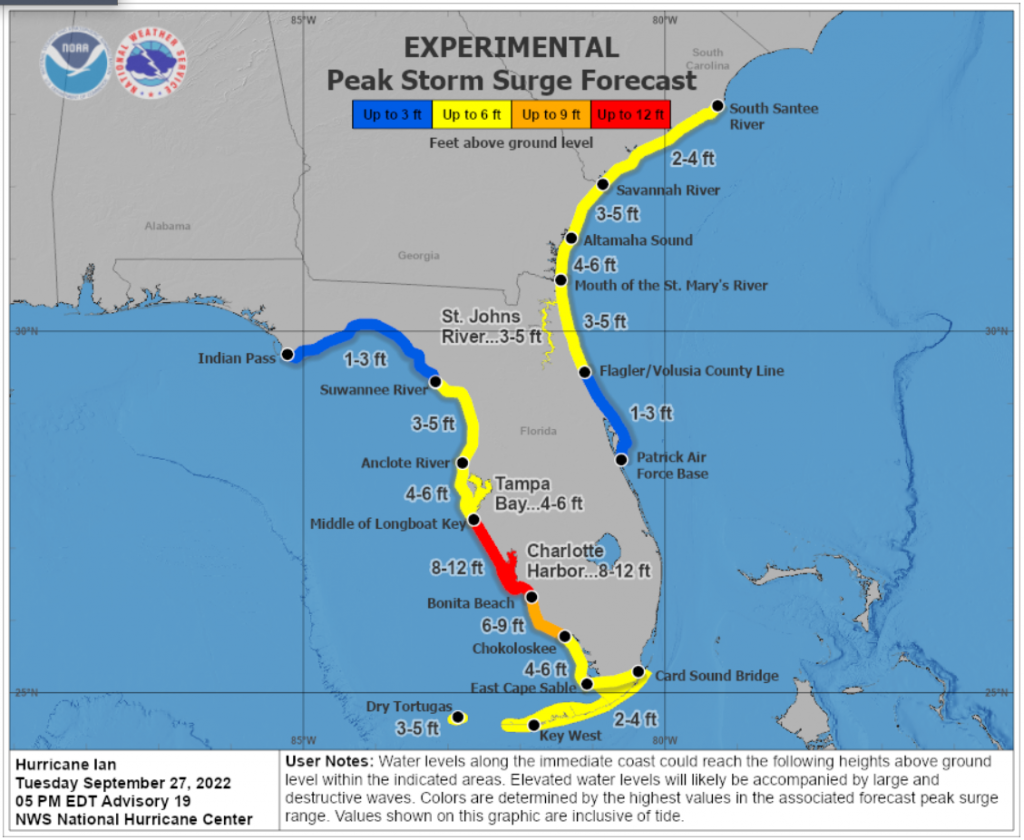 Evacuations of 2.5 million people continue tonight from Fort Myers north through Pasco County, north of Tampa.  The Governor and State Emergency Management Director Kevin Guthrie are advising residents that in some cases they can evacuate tens of miles rather than hundreds of miles.  Those on the west coast are being advised to go east to Miami-Dade and Broward counties and not north.  Guthrie on the urgent need for citizens to heed evacuations said, “If they heed the evacuation order, I have a 100% guarantee that they will not die from storm surge, a 100% guarantee they won’t have to be rescued from their rooftop.”   Tonight he expressed even greater urgency.  “I implore people who’ve been ordered to evacuate to do so now.  Otherwise, you may be left to fend for yourself.”

Tonight, the DOT opened the emergency shoulder lanes on Interstate 4 from Tampa to Orlando because eastbound traffic fleeing the Gulf Coast had slowed to under 40 mph.   Officials will do the same for any other highways where the speed drops below 40 mph due to traffic volume in order to get more people way from peril.   DOT Secretary Jared Perdue said officials will not use contraflow lane reversal where both directions of a road all go in one direction, as they have sometimes done in past storms.  Perdue said DOT determined that doing so interferes with the ability to get needed supplies and responders into evacuated areas.

Click here for the full National Hurricane Center briefing with maps.   You can also review our past Hurricane Updates.

Please know that we at Lisa Miller & Associates are here 24/7 for you …don’t forget it.  It may sound trite but we are all in this together, my friends and colleagues.  Please prepare and be aware!

(Here’s the latest News from the Governor’s Office of specific state preparedness actions:)