Beside their direct impact on Florida homeowners, multiple double-digit rate increases in property insurance are impacting Florida’s real estate market as well.  If rates continue to rise, there’s concern they will affect the availability and affordability of insurance for new homebuyers. 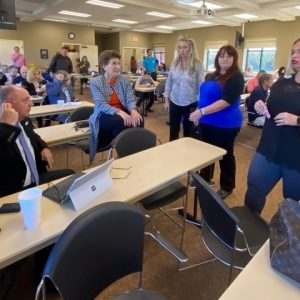 Host Lisa Miller discussing follow-up issues with members of the Pensacola Association of Realtors after her address on October 26, 2021

In a recent address to the Pensacola Association of Realtors, host Lisa Miller identified some key drivers behind the past two years of homeowners insurance rate increases in Florida.  She noted as rates go up, so do home mortgages for those who escrow their insurance, impacting home affordability.

Rising Litigation: In 2021, 76,526 property insurance lawsuits were filed in Florida, an 18% increase from 2020, according to CaseGlide.   Claims with lawsuits cost almost five times more than those without.  “In testimony last week in the Senate, Barry Gilway, who’s head of Citizens Property Insurance said that when a third party is involved, the average claim is $48,000.  When there’s no third party involved, anybody want to guess what it is?  $10,000,” said Miller.  “As claims costs go up, what do you think happens to rates?  They go up.  It’s pretty simple.  You don’t have to be an actuary to know that.”

She noted that according to industry stakeholders, it is estimated that three of every five insurance claims are inflated, whether the increase is only slightly or obviously suspicious.  Contingency fee multipliers, which allow plaintiff attorneys to request attorney fees twice or three times the customary rate, are also contributing to the increased and unnecessary costs of claims.  Miller told the Realtors that the DFS Division of Consumer Services has an insurance consumer hotline offering free help to any policyholder who faces challenges dealing with their insurance company and that it has a high rate of success settling disputes.

“When the third parties come into the room, I encourage you and your clients to say to that person, I don’t need to see you.  If I can’t get the free service that my tax dollars are paying for, I’ll come back.  But many times now, people file a claim and the first thing they do is hire a lawyer,” Miller said.

The resulting “cottage industry of 15 to 20 law firms” are responsible for the majority of homeowners claims lawsuits in the state, currently numbering about 100,000.  “The theory is, the more you sue, some are going to stick,” said Miller.  The Florida Legislature’s 2021 reforms in Senate Bill 76 that now require lawyers give a 10-day notice to insurance companies before filing suit, are being challenged in federal court.  “It forces them to come to the table and have a conversation like human beings should do…and work it out.  They don’t want to do that.  It’s easier to file suit, hope for the best, and get attorney fees,” Miller said.

Many of those lawsuits she said are driven by unscrupulous home contractors and roofers canvassing neighborhoods doing free inspections and proclaiming “you need a new roof and we’ll get the insurance company to pay for it,” said Miller.  “I want us all to have a new roof but that’s not what an insurance policy is all about.  If you need a new roof and it’s wear and tear, you have to figure out how to pay for it yourself.  If it’s wind or weather damage, they’ll (insurance companies) pay for it.  It’s just that simple,” Miller told the Realtors.

Reinsurance: From 40- to 45-cents of every dollar of a homeowners insurance premium goes toward the cost of reinsurance – insurance that insurance companies buy to protect themselves from overwhelming losses in larger claims and catastrophes.  Miller noted that money flows from Florida to off-shore reinsurance companies in Bermuda, London, and Germany.  But some reinsurance is purchased from the less expensive Florida Hurricane Catastrophe Fund, a state-run entity that has $16 billion in future claims paying capacity.  “There are those who think we cannot change the Cat Fund, but it’s going to take a long time to deplete that fund,” said Miller, noting the legislature could look at reducing the cost of reinsurance purchased from the Cat Fund.

Since her address, Senator Jeff Brandes (R-Pinellas) has offered an amendment to a bill in the 2022 Florida legislative session that would do just that.  It would:

Senator Brandes argued that lowering the threshold or “aggregate retention point” would lower the cost of reinsurance, with the savings under his amendment to be passed along to policyholders.  Suspending the hurricane tax would save every Florida residential policyholder an estimated $150 annually.

Premium Tax: “Two cents of every dollar that you pay in premium goes to state government.  It’s not a lot.  The regulatory arms of the insurance industry use that money to fight fraud,” Miller explained, saying she is not opining either way.

“There’s three ways to help this situation.  Change the reinsurance structure of our state, reduce litigation, reduce taxes,” Miller said, predicting the problem is only going to get worse, “because there’s only two ways for an insurance company to survive what I call the dysfunctional property insurance market.  And that would be to either reduce expenses or raise rates. The Office of Insurance Regulation is approving rate increases and companies are hoping the legislature will help them do one of the three things that I’ve just suggested.  It’s just pretty simple.”